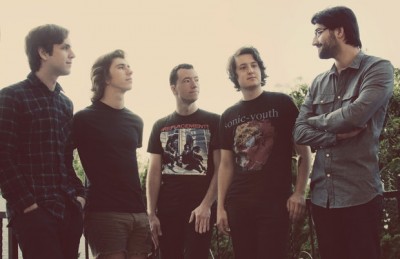 Vocalist Jeremy Bolm talks about the stories behind each track on Touché Amoré's new album,  Parting The Sea Between Brightness And Me.

“~”
Before any of these songs had actual titles, we called them other things. Usually goofy names. For this I once used a sensual hand sway to represent the softness of the first chord. When it came to naming it, I thought of the tilde symbol because it looked like the hand motion. Then realized how clever it could be naming it that because the title of the record is in the opening line. “Tilde” is latin for “title.” This song basically lays out lyrically what the rest of the albums entails.

“Pathfinder”
This song is pretty straight and to the point. It's one of the most aggressive songs on the record. We wanted to go into a serious ballkicker after the first track. I wanted to write a non-sugar-coated tour song. It dives into how I hate making anyone miss me and how I've found comfort in basically being a year round nomad.

“The Great Repetition”
Ed Rose (producer) liked this song the most. He felt it represented all sides of what our band is about. It's fast, it's slow, it's quiet, it's loud. I wanted to challenge myself with writing. I basically created a character within myself. It's written through the view of a failed magician doing his final performance. He's realized that he's lost everyone who ever believed in him because of his own actions. He understands and accepts the repressions.

“Art Official”
“I'm not the golden boy so don't shine me on” was inspired by Leonard Cohen. Lyrically this song is a pre-cursor for the next track.

“Uppers/Downers”
Musically this is the most '90s screamo throwback-influenced song. It commands some Indian Summer/Honeywell drumming/strumming. Lyrically it's about the fear that I have for letting anyone down. Since this band has grown, I will get a number of kids thanking me for helping them or even “saving” them. It makes me feel really good but at the same time scares me to death. I've never felt I was someone that anyone should look up to. I'm terribly negative and normally too apathetic for my own good.

“Crutch”
When I wrote this song I was listening to a lot of the National. It's safe to say I went into writing it with Matt Berninger in mind.

“Method Act”
One of our favorite tracks on the record for sure. Probably the most personal song on the record for me. It's become very difficult to maintain normal relationships at home. When the band was first getting attention, Jeff Eaton (Modern Life Is War) called me one night to catch up and he gave me a fair and honest warning. He let me know that though the next couple years may be the most exciting for us, that it's going to take a serious toll on our personal lives. “It's a fun ride, but prepare to lose most everyone.” It's draining for me to be gone for so long, then come home and hear all about what you've missed.. then leave again and then have to do that all over months later. I just don't have the energy anymore. I also hate having to talk about about tour life with people outside of that world. No matter what, you feel like you're bragging or something. I avoid all those conversations as much as possible. My time at home has become pretty secluded because I just don't have the stomach for it anymore.

“Faceghost”
When you find someone important who you may only see a couple times a year. Knowing they're worth the struggle of keeping in your life.

“Sesame”
Going into recording this was the song I was most unsure about. It ended up being one of my favorite songs. Ed had us change some tempos around and gave us confidence in extending some parts. Lyrically it’s four different lines I had written at completely seperate times that somehow came together and worked for this song.

“Wants/Needs”
Take a closer look around. Sometimes it's startling. The drums on this song are ridiculous.

“Condolences”
This was an idea I had that I couldn't be more proud of. I really wanted a piano/vocal track on the record and luckily Elliot happens to be a great piano player. He came up with the perfect score to the mood I was hoping to convey. This song is about how even in my passing, I need things to be exact.

“Home Away From Here”
FInding comfort in distance. it's the poppiest song we've ever written, also one of the most fun. We had demoed this song and sent it to Ed and he helped us rewrite it. He had a great ear for it and now listening back to the original idea, we definitely made the right choice in trusting him.

“Amends”
This is collectively our favorite song on the record. It draws a lot of influence from our tourmates Envy. It came out exactly as intended and we’re all very proud of it.