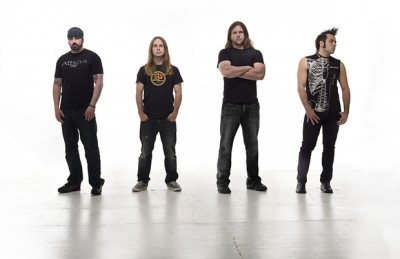 “Watch It Burn” is the lead track from Darkness In The Light because we felt it captured the aggression and heaviness of the album while also staying true to our core sound from our earlier records. This is one of the only tunes without a guitar solo, but the harmonies are there to mix around one of the heaviest choruses we've ever written. The song is angry, fast and in-your-face, while also allowing for a melodic bridge late in the song, much like some of our older material. Lyrically, it is an anti-extremist song: It attacks both the left and right of the political spectrum while also calling into question extremist religious groups and their influence on our culture. All these political and religious extremists seem to do is splinter society and turn people against each other, [people] that otherwise likely wouldn't be at odds. Basically, we can put aside some meager differences and work to better ourselves, or we can keep heading down this destructive path and eventually “Watch It Burn.”

“Ruination Of The Lost”

This one is a pummeling front-end album song which showcases our mix of both American and European metallic influences and has an apocalyptic lyrical theme. Buz [McGrath, guitarist] and Ken [Susi, guitarist] both rip some serious guitar solos in the tune, and their guitar harmonies are hauntingly catchy. Lyrically, it speaks about the end of the human race in the not-so-distant future if we continue to destroy our planet with the current level of disregard year after year. It's hard for me to understand why people still let money and politics interfere with any real positive change, even with the warning signs Mother Nature has given us. The title of the song refers to the self-destructive nature of the human race and how we are collectively so lost in our lust for money and power that we are destroying the world that gave us life in the first place.

“Shadows In The Light”

Aggression and melody coexist; both dominate this track equally. More sick solos from both Buz and Ken, as well as a more uplifting lyrical concept of standing face to face with your worst enemy and taking on your demons head on. By monitoring our Twitter and Facebook feeds, this one seems to be one of the early fan favorites.

This one is currently my favorite track on the record. It has every element I love about metal: heaviness, speed, solos, angry vocal spit, a chorus you can scream along to and some Southern-rock-influenced metal riffs that add to the heaviness and grit of the song. The lyrics speak of becoming desensitized to tragedy and the harsh dealings life can provide, because of seeing and experiencing so much of it around you. As time goes on, I feel it is something more and more of us can relate to.

This is one is written from the point of view of a person on life support that isn't coming back to join the living. They know they lived their life to the best they could, and now their last wish is to be set free. Musically, it is a ripper from start to finish. It reminds me of our early material from our Stings Of Conscience days. It has that same energy and sense of urgency to it that gets the blood flowing.

Every Unearth album has the metallic “epic” tune, and this is the track on Darkness In The Light. Buz leads the way with some well-rehearsed sweeps that give way to a crushingly fast-paced and heavy verse. The song is about giving your everything to whatever task you need to conquer. Whether it is a social situation, your job, a sport or whatever, it is about doing it like it could be your last time. Never half-ass it, because it could be your last. I wrote it while on tour at the tail-end of the album cycle. We had put in over two years of constant traveling for our last album, and I guess you can say I was a little burnt out. I wrote that song full-on knowing that no matter how beat up you get, if you love what you are doing, then you have to give it your all every single time. It is a rallying call.

This album is pretty relentless with the constant speed, aggression and heaviness, and “Equinox” gives it the breather that it needs to break things up a bit. We once again start in with piano, courtesy of our bassist John “Slo” Maggard, much like “Aries” on The Oncoming Storm and “Big Bear And The Hour of Chaos” on III: In the Eyes of Fire. This time, though, we turn it into a full song with every instrument, including vocals breaking in at about the halfway mark. It is short and sweet, but it does its job of breaking things up, while also injecting more a darker mood both musically and lyrically into the album.

“Coming Of The Dark”

Here's another Twitter fan favorite that also reminds me of our earlier work. Lots of urgency, speed and aggression to go around, as well as some fierce lyrics speaking about being fed up with the shit life has handed you, especially for those who feel wronged or that they have been dealt a bad hand. Sometimes you need to take the bull by the horns and stop hoping things will be okay. Make your life the way you want, and make sure you do it yourself. The lyrics, “No longer will I follow false hands of destiny” to me means to only let what didn't kill you make you stronger and to pave your own way to happiness. You and the ones closest to you are what matter most in this world.

If you like guitar-oriented tunes, then listen to this one. Melodic harmonies make their stamp all over this track that are reminiscent of some of our older songs “Zombie Autopilot” and “So It Goes”. Lyrically it is about honoring the memory of those close to you who have passed. Always keep those you lost close within while also living the life you have.

Here is a sing-along, “anthem”-styled jam. The clean vox mixed with my vocals and a group chant provide the major hook to this tune. McGrath and Susi again add some sick solos to complete the anthemic vibe.

Probably the heaviest song on the album, and one of the heaviest we've ever written. The double bass and overall drumming on this track is like nothing ever recorded on an Unearth record. The breakdown? Forget it. If there isn't blood on the floor when we play this live, then the audience is soft. Again, the solos are face-melting. Buz and Ken just keep getting better with each album, and this song is another that proves it. The vocals and lyrical theme is pure venom. For me, it is about many people I have come across in life that have stabbed me (or people close to me) in the back for their own personal gain. A lot of this inspiration came from some—not all by any means—of the people I have met in my travels and time in the music business. There are many amazing people, but at the same time there are a lot of shady characters out there, and your guard needs to constantly be up. Disillusion is my frustration and anger boiled over onto a sheet of paper and eventually, the song. I curse all the time during a live show, but have never done it on one of our albums up until this song. “Faith fucking failed me” is a direct reference to the faith I had in people who let me down or stabbed me in the back in this business. I'm still here, though, and a lot of them are gone for one reason or another.