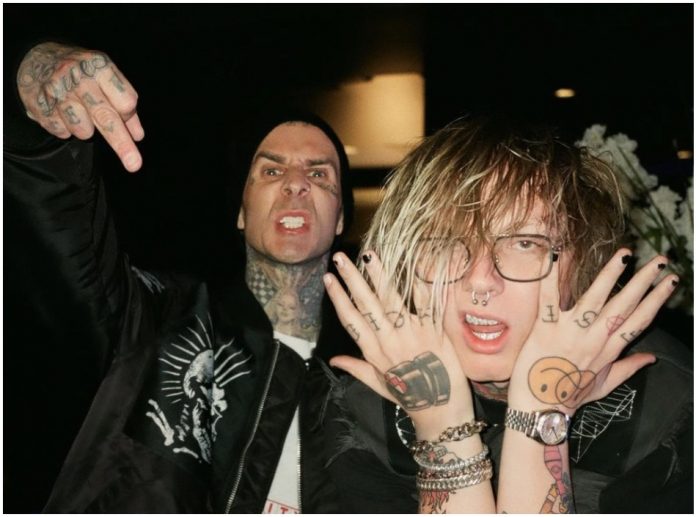 In recent years, blink-182’s Travis Barker has been an active supporter of younger artists, appearing on tracks with Machine Gun Kelly, YUNGBLUD, nothing,nowhere. and more. His latest collaboration is with rapper Sueco, fka Sueco the Child, on pop-punk track “SOS.” 24-year-old Sueco is known for mixing pop, pop punk and rap with inventive beats to create something entirely unrestrained by genre. His first hit, RIAA gold-certified “fast” was followed in 2019 by debut project MISCREANT, along with hit singles “PRIMADONA,” “Smackdown” (feat. TOKYO’S REVENGE) and “Juice.” Sueco is a rising star, recently signing to Atlantic Records, appearing on Spotify’s Viral 50 charts and performing on Jimmy Kimmel Live!

Barker and Sueco’s first track together, “SOS,” exclusively premieres on Alternative Press today. It sees Sueco moving away from his breathy rap roots and leaning into a more ’00s sound, which is likely down to Barker’s influence. Opening with tinkling, upbeat keys that give way to pop-punk-inflected vocals, “SOS” is a tormented love song. The track is underscored by those keys and organized around a big, instantly catchy chorus. In a previous interview, Sueco revealed that he’s a “producer at heart” and tends to start with a great sound: “To me, the music starts and ends with the sonic quality of it. It needs to sound like ear candy first. Before it has deep, profound meaning to it, it needs to just fucking sound good.” True to his word, “SOS” sounds pretty good.

In the fuzzy, chaotic video, shot by Trevor Potter, a black-haired Sueco fights with different girls on a tour bus, parties hard and performs in front of a wall of old TVs while Barker plays the drums in a shipping container.

Speaking exclusively to AltPress, Sueco says, “This is my favorite video I’ve ever made. Travis has been an inspiration of mine since I was a kid, so working with him was super dope and a dream come true.”

Listen to the track and watch the video exclusively here: