Turnstile connects with friends Will Yip and Atiba Jefferson

For our digital cover, shot by legendary photographer Atiba Jefferson, Turnstile's Brendan Yates connected with friend and producer Will Yip.

Turnstile have consistently been at the forefront of music. The group have continued to revisit their hardcore roots, even as they push the genre in previously unexpected directions. This creativity bleeds into their entire approach, leading them to construct innovative music videos, unique campaign rollouts and inspiring collaborations. 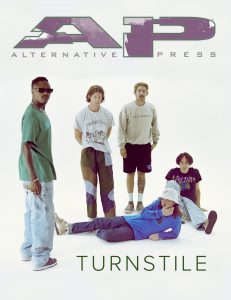 For this reason, it’s no surprise that Turnstile’s Brendan Yates and producer Will Yip are such good friends. Both have a deeply ingrained love of music, matched only by their energy and their enthusiasm for what they do. They also are your paradigmatic musical omnivores, people who refuse to let neat lines or preconceived ideas dictate their taste or their craft.

For our August Turnstile digital cover, legendary photographer Atiba Jefferson shot the band. We also brought Yates and Yip together. The focus topic of their conversation was the group’s upcoming record, GLOW ON, due out Aug. 27 via Roadrunner Records. However, the chat turned into a deeper meditation on music and artistry. It also offered Yates and Yip an occasion to reflect on their unique musical friendship, their approach to art and their shared love of pubs in the Philly suburb of Conshohocken.

JOSH MADDEN: I know you guys have worked on records together. In the time in between when you haven’t seen each other, do you ever share music or just be like, “Hey, have you checked this out?”

BRENDAN YATES: Definitely. I think throughout the process of being in a band and traveling and meeting people and making friends, you build a lot of relationships. One that is very unique is when you’re building a relationship in a working environment, especially making a record together. You’re really connecting to someone on that level. When you spend so much time together working on a project, you develop a similar language.

Read more: Here are 16 producers who shaped some of the best recent pop-punk tracks

I can always hit up Will in particular about something, like, “Why does it sound like this is just underwater right now?” You’ll be able to answer those kind of questions. For me, it’s always really exciting to know that I have not only a friend but someone that gets as excited about those kind of things.

I remember you would send me mad references about things like that. I remember comparing it to Lauryn Hill because she will send me shit like, “Yo man, it has to rock like this Clash song, but at the same time hit 808s like this ’90s hip-hop joint. Make it happen.” I know you’re very humble and you don’t talk about yourself too much, but I put you in that class of true visionaries like Ms. Lauryn Hill.

Read more: 11 thrilling Netflix shows to watch until the ‘Dexter’ reboot is released

That leads me into some things I want to talk about, especially with this record [GLOW ON], because we [only] had early, early, early conversations. When did you have the overall encompassing vision for this record?

YATES: That’s always a hard thing going into a record because it’s not something super tangible. It always comes with this level of insecurity. I think forming an idea of a record comes to starting with a couple of ideas and then seeing some consistent themes between those and taking it from there and letting it grow from there, I guess. For a lot of people I talk to, there is this level of uncertainty with those ideas because you’re shooting in the dark. As soon as you feel like you have these ideas that start to feel cohesive together, that’s when it starts a snowball effect as far as knowing how to get what you want. The whole process is always starting as wide as possible and narrowing down.

YIP: This is a generic-ass question, but I think people will like to know, especially with me asking: I think it’s a cool dynamic of the differences or new experiences of working with Mike [Elizondo]. I come from the producer side of things. I’m aware of what a producer can do and the influence that they can have or not. What was the experience like?

Read more: Afterlife release “Miles Away” ahead of forthcoming ‘Part Of Me’—watch

YATES: The experience at Mike‘s studio was removed from the rest of the world. It was on a farm in the middle of nowhere. We’re put in this little barn of a studio together. It was really cool working with him. He has such a wide range of things he worked on. The things he would be focusing on were not things that I would be focusing on. I think if you’re working with someone, that’s always a good dynamic to have. You don’t want to work in a space where everyone’s on the same page and there’s not this outside perspective. It’s a scary thing going in, but we ended up coming out on the other side of it having learned a lot.

MADDEN: What I love about you is you just give everybody permission. Nothing seems musically off the table for either of you. Is that correct, in your view?

YIP: I think we come from the same place. We love so much music, and we’re all influenced by so much music. I don’t think people know the depths that Brendan’s musical influences go. It goes so deep. We just love music. I appreciate, Josh, that you recognize that nothing’s off the table because nothing is. We’re just big fans of music. We just love records.

Read more: Benét sets out to change the pop game in new ‘Game Over!’ EP

YATES: It’s funny when people ask, like, “So did you want to make sure that you had a couple of songs with more melody?” As if it’s some sort of box to check off. I just like to sing songs. I don’t know. I don’t think I’ve ever looked any way other than trying to just capture whatever you’re feeling. That’s what I love about music in general. This is me not talking about us but talking as an outside music fan. What I appreciate from people making music is something that reflects that huge complex body of DNA that makes them up. We just love music and making songs that feel good to us. As simple of a thought as that is, that’s really just the goal.

YIP: Yeah, my goal is always do what feels right. There’s never this intention of like, “Oh, we need this.” It’s like, “What serves the song, and what feels right to us?” I’ve learned that from you. It sounds cool, but it doesn’t feel right playing as a band. I need it to feel [like that] chemistry-wise. There’s something in the chemistry, in the actual physiology of the music, that will touch souls differently if it feels right in a certain way. I’ve been living by that.

But damn dude, you’re saying that you guys were mad secluded? People ask me all the time because everyone thinks that they’re fun. They think they’re partiers. They’re like, “Are we the funnest band?” I’m like, “No, I’m gonna have to be real: Turnstile. Turnstile ran this place.” It’s become folklore in Conshohocken. Turnstile’s the only band that normal bro dudes from the pub will rep. They ride hard for Turnstile just because the energy was so right and so sick. [Laughs.]

Not to circle back, but you’re one of the first people to put me onto Blood Orange, forever ago. [Dev Hynes has] become such an important artist for both of us in terms of references and inspiration. How did that all go down?

YATES: It was so cool. It was a very brief communication a couple of years ago. He had posted about Time & Space. We had been in touch, just about wanting to do something where there was a show or work on music together. It was always in the back of my head [that] that would be amazing to do. And I think when it came to this record, the song “Alien Love Call” with Dev was a small idea that we had been playing for years. By the time the record came to be made, that was one of our songs that we needed to record.

I’d sent him a few songs, and he was down to come together. He sang on other songs as well, which ended up just being a natural part of the process that we let rock because it did something for the songs that we didn’t see until he sang on them. It opened up a new feeling for the song to me. I have said it in a lot of interviews so far, but I’m so grateful to work with someone that’s so inspiring to me.

YIP: When did you know that TURNSTILE LOVE CONNECTION was going to be part of the thing? I know you, and I know Turnstile, and I know the artistry that goes into it. All that shit just doesn’t happen after the fact. There’s deliberacy, maybe not in every aspect of the video. Obviously, that evolves. But you guys do cool inspiring shit. Now, every band thinks they can do a short film because Turnstile fucking set the framework for it. When did you know you want to do that?

YATES: That’s something that we always as a band really love doing. It’s also part of the context on how you hear a song for the first time. When you have an idea of how dots are connected or how things make sense when you make a song, I think it’s an opportunity to express that. When we just had demos before we recorded the album, the whole album order of all the songs already was set in stone. Those four songs on a sidebar in my head connected a little bit to each other. It was always an idea to do something that was more than one video. It was an idea that turned into a challenge that turned into a long process of working on it and all of us being super-involved in the process.

Working on it with friends makes it more rewarding, too. No one’s necessarily just a hired gun. Everyone’s in it together. There’s so much that goes into those kind of things that I had no idea about, the responsibility and decision making. It turned into a process that was—at least from my perspective—a unifying experience, too. All the people that were involved in Baltimore were friends from around the area that volunteered to come and be in it. The whole thing was surrounded by a really good feeling.