The Clique is at it again, going down rabbit holes in an attempt to figure out the details of the next TOP era.

twenty one pilots fans know better than anyone how easy it is to get lost in theories surrounding new music. Josh Dun and Tyler Joseph are the masterminds of messing with listeners. They can never just release new music. TOP only reward their fans with new tunes after torturing them with cryptic teasers and mind games for weeks on end.

Dun and Joseph have laid low this year, aside from releasing their single “Level Of Concern” in April and leading fans on a virtual treasure hunt two months later. We soon learned that TOP have been working on a record while stuck at home during the coronavirus pandemic. And it might actually come sooner than expected.

“I’m not sure when it’ll be released, but it’s definitely going to be sooner than we were planning on releasing a record,” Joseph said during a May interview with Zane Lowe. “I don’t know if it’s this in-between record or if it’s a continuation of the narrative and where we left off.”

In July, Joseph exclusively told Alternative Press that there were several details about the upcoming album he was still unsure about.

“I’m not really sure which direction we’re gonna go yet,” Joseph says. “There are two very different records, in my opinion, to be written. One being right now and the other one being after that. I don’t know which one I’m going to do first. I have an idea of what I think is next, sonically. It’s just whether or not it’s too big of a risk, I guess.”

As fans wait for the band to release the follow-up to 2018’s Trench, they’ve been dominating the internet with theories on which direction the next record could take. Check out some of these theories below.

TOP will take a break from the narrative concept

Wouldnt it be great if twenty one pilots just released an album without being extremely cryptic and putting millions of theories in people’s heads. Most people are thinking the album will sound like RAB and if that’s not the case people will be disappointed again

Any twenty one pilots fan can recall the Trench cycle as one big mind game. The band didn’t hold back on their cryptic tactics during the era, leading us down a few rabbit holes as we analyzed videos and lyrics for hours on end. After all of that, some fans are thinking, and hoping, that TOP will take a break in their grand narrative concept. Joseph and Dun have mentioned that they plan on taking more risks with the next record, so perhaps the biggest risk of all could be diverging from the story and releasing new songs for the sake of releasing new songs. To be frank, this doesn’t seem likely based on their track record, but we can’t count anything out.

They’re going to drop the album on a whim

imagine if the pilots just drop the album outta nowhere.

Because of Joseph’s uncertainty regarding when the album will drop, some fans in the depths of the internet have theorized that TOP will pull a similar move that Taylor Swift did with her latest record, folklore. Fans have speculated that the band might decide just to drop an album one day. This theory could go hand in hand with the last one, as the band stray away from everything we’ve come to expect of them with a new album cycle. And considering all of the unexpected surprises that life has thrown at us in 2020, we can’t exclude the idea.

Guys I have a theory for @twentyonepilots I think the music video is gonna keep going until their new album comes out, loc is the lead single off of it, and the album will be called never ending.

One fan theorized that the band’s never-ending video for “Level Of Concern” is actually functioning as a countdown clock to when the new album will drop. They believe that the video isn’t actually never-ending—and that the concept could be an album title clue. They think the group will call the album Never Ending, which twenty one pilots will release when the video ends. While there isn’t a whole lot of evidence to back up this idea, if this fan somehow guessed right, they deserve some serious credit. 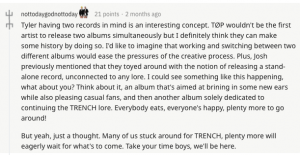 Some fans couldn’t overlook Joseph’s comments about the existence, albeit in his mind, of two albums or the possibility that the band will drop both at the same time. Again, this doesn’t seem likely based on the band’s track record of hyping up each individual song and album release possible. But it would be quite a treat for us.

Clancy will play a major role on the next record

Pt. 2
Then, what if in the new album, Tyler will tell about Clancy’s death, and his exemption from Blurryface?
What if Clancy sacrificed his life, to help Tyler get out from depression? https://t.co/N6ewpnLNcv

Joseph previously told NME about how TOP left the story off with Trench. He said there was a very specific reason it ends with “Leave The City,” to leave room for what’s next. “There’s a character that hasn’t been talked about on any record yet that plays a huge role in the narrative that obviously will need to be talked about, and it’s probably where we’re going next,” he says. With this comment, many speculated that he was referencing Clancy. And there’s just as much conjecture on who or what Clancy is or represents, particularly after the Trench era featured a series of letters from the character. If it’s true that Clancy will be a main character on the next album, there are endless possibilities with how the band will spin it.

They won’t release anything else until 2021

2021 is such a good year for twenty one pilots content.. ??give us something

One theory that fans couldn’t resist pointing out is that the new album probably won’t be released until 2021. Of course, that number is in the band’s name. While it’s definitely a surface-level prediction, it does seem likely that twenty one pilots will draw out the release as long as possible, and it’s a missed opportunity if they don’t release it during their year.

The “Level Of Concern” puzzles dragged us back into Dema

Level of Concern Interactive Game Theory: We’re being brainwashed by Dema doing this puzzle. from r/twentyonepilots

Some fans have speculated in a lengthy Reddit theory that the puzzle of codes for the “Level Of Concern” USB files was just an elaborate way for Dema to brainwash everyone. Dema originated during the Trench cycle, and the city is referenced throughout the album. It’s sparked a number of fan theories over the years. This meta theory insists that we all need to find a way to get out of Dema’s control, and we can’t really trust the band to help us because they’re under its control as well.

What color do you think will represent the next album? from r/twentyonepilots

One of the Clique’s favorite things to speculate is the color of the next era, which has been discussed in lengthy threads online. While Blurryface is marked by red and Trench yellow, some fans think those colors will blend together and make orange to mark the next era. Some people think the band will return to blue from the Vessel era to mark leaving everything behind and starting fresh. While there’s no general consensus on which color the band will pick, it’s definitely fun to speculate.

There’s a theory that something twenty one pilots related happens around November 27 which is half way between Halloween and Christmas, because of what was on the mailboxes in a music video that was released in April. Sign me up for this theory because I’m convinced it’s true pic.twitter.com/rHSD4VJupx

One fan suggested an exciting theory that the band will release an album any day now. And it’s all via a clue they think they found in the mailbox from the “Level Of Concern” video. In the video, the mailbox is seen decorated for Halloween and Christmas. That leaves the fan believing that the record is coming sometime between the two holidays. We can only hope they’re right so TOP can swoop in and salvage what’s left of 2020.

the year is 2050. you get a tweet notification for twenty one pilots. “level of concern version 204882577273 out now”. they had no new album since trench. only level of concern. tyler laughs in the distance. clikkies are crying. cities burn down.

While this theory is mostly a joke, all bets are off on what the band could do. One fan guesses that twenty one pilots are going to drop different versions of “Level Of Concern” forever. Please, let’s all just hope this person is horribly, horribly wrong.