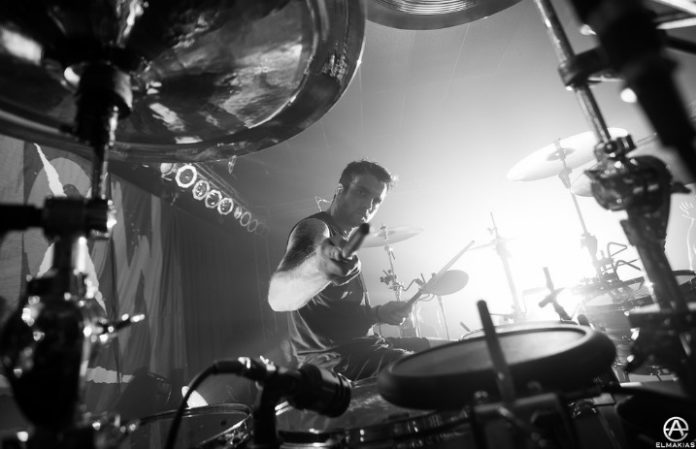 At night, you’ll find Rian Dawson holding down All Time Low’s rhythm section with his airtight drumming. But before the lights go down, the 27-year-old musician is likely holed up backstage working on a different sort of passion project. For the past few years, Dawson’s become a budding producer and engineer, the product of an ever-inquisitive disposition and time spent rubbing elbows with the likes of John Feldmann (5 Seconds Of Summer, Good Charlotte) and Grammy-winner Chris Lord-Alge (Green Day, Smashing Pumpkins). He recently signed his first management deal with Self Titled Management—who helm the careers of fellow producers Casey Bates, Rob Freeman, Brandon Paddock and Ace Enders—and is eager to fill downtime on tour with production and mixing projects. Backstage at the Back To The Future Hearts tour in St. Louis, Dawson chatted with AP about his emerging new career behind the boards, and how an exercise in staving off boredom actually saved some of the best tracks from All Time Low’s Future Hearts, from ending up on the cutting-room floor.

What was the moment for you where you went, “Oh, I could do that”?

It was never the moment of, “I can do this.” It was the moment of, “How the hell do they do this?” It was when we finished Put Up Or Shut Up, we started playing to backing tracks. Back then it was a tambourine or shaker, stuff like that. We had to get the guys who mixed it, Zack [Odom] and Ken [Mount], to send me the tracks. I remember me asking all these questions: “How do you actually do this? Do you have to pull it from the song?” I just had no idea what went into making a record. At that point, I got interested in how the pieces fit together.

You guys were really young at that point.

Back then it was just a real juvenile interest. I didn’t know what Pro Tools was, didn’t know anything like that. But as the years moved on, I’d figure out what I loved sound-wise about my favorite albums. I’d listen to Enema Of The State and that drum sound. I loved Jerry Finn’s style. Then Take Off Your Pants And Jacket came out, and I’m like, “Jesus, how do they do this?” I really just dove in and tried to find out on my own what I really liked about this sound, what did I like on this record vs. that record. That led to more and more research.

Eventually I started fiddling around with Pro Tools on my own. I’d take a track that was already mixed and mastered and figure out what EQ did, what compression did. That really took hold when we were doing Future Hearts, and I wanted to take a crack at mixing some of the songs just for fun. We’d recorded a song called “Kids In The Dark,” but it wasn’t going to go on the record. We didn’t think it had the energy, so I took a crack at it thinking it would be a B-side. I mixed the song—it wasn’t mixed, but it wasn’t a demo; it was just raw, and there wasn’t a ton of life to it—and I guess Alex and our manager, Keith, heard my mix and decided it needed to be on the record. It ended up being mixed by Chris Lord-Alge, so not my mix, but it was a really cool feeling.

[Future Hearts] is the first album I’ve ever been listed as an additional producer on songs. The ones I mixed originally—“Kids In The Dark,” “Dancing With A Wolf”—were ones we weren’t sure were going to make it, so I took a stab at them out of boredom. When you’re in the studio with the band, John Feldmann and his engineers, you don’t say all of your ideas. Nothing against John—he’s very open, and so is Alex, more so than me. But you’re still kind of reserved. I’m still nervous around John Feldmann; he’s made some of my favorite records and is an amazing songwriter. I knew these songs weren’t necessarily going to be on the record, and when you’re sitting with the song by yourself for six hours, you kind of get these ideas. I’m lucky enough to have the ability to put the ideas into the song. I sent those songs over to Alex, and we decided we were going to do them for the record. When they went to Chris Lord-Alge for mixing, you always send a reference, and that reference was my mix. As it went along, he said, “Hey, there’s a few things from your reference that I don’t have in the track.”—yeah, that’s my production, and CLA wants it! That’s going on my tombstone.

And it’s kept building from there?

I kept going at it. I’m one of those guys who hates being still. I love working. When I’m home, I can play drums, but I’m not going to play drums all day. I started building a studio about two or three years ago and I’m just always in it. I help out my girlfriend [Cassadee Pope], so I decided to open it up to other bands to take a crack at it. I openly tell them, “If you can afford someone better, get someone better.” I charge what I think is fair. I don’t take my name into account or anything like that. I know it is a benefit; Twitter followers alone, it’s a benefit [Laughs.] I make sure they know what my sound is, that I love a big pop-punk, energetic production. It’s been really fun, man. It takes up a ton of free time on tour, too. The room we’re sitting in now is dubbed “the Pro Tools Room,” so every day I have a dressing room that I can mix in from 9:30 a.m. to 4 p.m., which is when our first meet-and-greet starts.

You’ve got a lot of projects in the works?

Yeah, right now I’m doing this band called the Everyday Anthem. They took a chance on me, and I took a chance on them. They didn’t have a ton of music out at the time, but they covered “Something’s Gotta Give” acoustic, which a lot of bands don’t do. I heard it and thought, “Damn, these guys are good.” I think I put out a tweet saying I’d love to mix some records, and I saw their name. They sent me some songs and it was really rough, but I was lucky enough that the songwriting was there. At this point, I’m sure a lot of the projects I’m doing will need a lot of work. But I’m finishing up an EP of theirs right now, and I’m really stoked on it.

You’re moving to Nashville in the near future, which will probably open a lot of doors.

Luckily, moving to Nashville lets me pursue this as a career, because the guys in Nashville… I feel like I could work at producing and engineering for the next 50 years and not get close to what they can do. It’s the best of it. I’m always eager to learn. I’m lucky to have our sound guy, Phil [Gornell], who runs a studio out of Sheffield, England called Steel City Studio. He’s a phenomenal mixing engineer, so he’s been a big help. I have no pretense about how good I am; I know I have a lot left to learn. It’s exciting to be around people who are willing to teach. It seems like this world of engineers and producers want to help each other out to an extent. At the end of the day, it is competitive, but you’re always sharing secrets. It’s like a secret club of magicians who only share with each other. I’m lucky to have had conversations with Chris Lord-Alge, Neal Avron, John Feldmann. I’ve got a huge advantage in that aspect.

As a drummer, how do you avoid wanting to keep the drums way up in the mix?

[Laughs.] It’s definitely tough, man. Generally the first mix note I get back is, “This is fucking great, but maybe turn all the drums down about 3dB.” [Laughs.] It’s so true. Modern-day rock recordings—not so much in country, which I’m also really interested in—have a ton of the drum energy up front. I’m pretty lucky in that aspect, but on “Bottle And A Beat,” which is a song I mixed on the Future Hearts deluxe edition, I knew I was going to mix it from the start. I had Alex come to my place to do mix revisions, rather than emailing me and being, “It’s the third line of the chorus on this part…” The first thing Alex says is, “I’m sorry, man; drums have to go down a lot.” He said down by 5dB, we agreed on 3dB. We got it back from mastering, and the first thing I thought when I listened on a real stereo system was, “Wow, the drums are pretty fucking loud!” [Laughs.] He still tells me he can barely listen to it because the drums are just so loud.

But it makes me realize the audience doesn’t just want to hear drums all the time. Even the way I play, you almost don’t want to know the drums are there until they’re gone. A lot of audience members can’t tell when I’m hitting the kick or the snare, but you take the drums away and the song is gone. I’ve learned to mix like that: Accent the parts where the drums should be showing, and otherwise strip them away as much as possible. But for all I care, take out guitars and bass! [Laughs.]

What’s the biggest difference between producing and mixing?

The production work is a lot more creative. I see mixing as algebra: There’s a solution and a way to get there. You can’t go too far outside the box or the song is gone. The pieces are all there for you. With production, you’re creating those pieces, and that’s something I’ve never really been that good at. I’ll openly say I’m not the most creative drummer or songwriter—and that’s okay, because I have Alex who is nothing but creative. With production, it’s a scary thing, but it’s a lot easier for me to sit in a day for eight hours without anyone looming over my shoulder. I’m very new to the production aspect, but everything is a step in the right direction for me. ALT