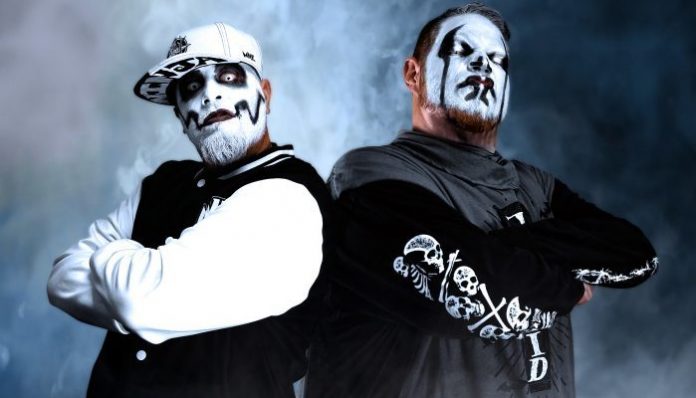 Twiztid have been doing their own thing for a long time. Over the years, the rap duo of Jamie Madrox (Jamie Spaniolo) and Monoxide (Paul Methric) have evolved from the horror-flick hip-hop that first got them noticed in the ’90s to amassing a dedicated cult following and a highly successful merchandising business. Case in point: The group quickly sold out of their limited-run Twiztid action figures. They’re 6-inch figurines of Madrox and Monoxide wearing their customary face makeup and wielding axes. How many bands can brag about that?

Instead of resting on their laurels, Twiztid have been churning out an impressive amount of music while testing the limits of their sound. The group released three albums and an ’80s remix EP in 2020. Their next record, Unlikely Prescription, is slated for release in June. The album is an unlikely detour into rock music, taking the occasional distorted guitars and hard-rock flourishes from their previous records and turning them into the main course.

We caught up with Madrox and Monoxide to discuss the upcoming record, their breakneck recording pace and rocking hard.

You recorded a ton of new music in 2020. How did you manage this despite the COVID-19 pandemic?

JAMIE MADROX: Paul and I have a whole bunch of beats and stuff that we acquired before all of this craziness. So thank God we had that to keep us busy. But it’s not the same as being in the studio. It’s not the same as hanging with him while we’re writing it.

Before I tested positive, we had a regiment. We would come up to the studio on different days. Luckily, we were able to get as much material recorded as we did in the time that we had. Now it’s to the point where we’re just rounding out songs and taking notes. So that when we do get back into the studio, we can final-touch shit and have it move on for the rock record.

This is one of the particular times when Paul and I’s work ethic kicked off best for us. Because we were so ahead of the game, it was easier to just put stuff together the way we had planned it out, while other people would just shut down.

Unlikely Prescription takes the hard-rock flourishes of your sound and amplifies them, turning them into the main course. How was the recording process for this album different from all the others?

MONOXIDE: Coming into it, we didn’t want to be posers in the house of rock. We’re going to show you what we can do. Hopefully that’s good enough for you to understand that we’re not just here for a day. We fucking rock, dude!

MADROX: Until now, Freek Show was our biggest dip into rock. It’s always been more predominantly rap. To switch that dynamic and make it predominantly rock, it flips the script and makes it fun for us. We have a fucking blast when we’re in the studio trying to figure out how to make bridges and breakdowns and shit like that and actually vibing out to the music. We’re making music that we enjoy listening to, and I think that’s one of the most fun parts.

MONOXIDE: It’s a learning process for me. I didn’t listen to a lot of rock music, so I learned how to write rock songs and rock structures and hear a beat completely different. Rap is so controlled. With rock, you have so much more freedom to explore. Learning all that, it’s like a brand-new day. Another evolution. The minute you stay stagnant, you’re done.

MADROX: Embracing this musical style and letting it in completely has been a big deal for us. It makes it fun. Not that it wasn’t fun before, but it’s a newfound fun. I feel at times like it’s young Jamie and Paul again, and this is what it would have been like had they did different music.

MONOXIDE: I think it’s a great representation of the genre, and we’re proud of it.

What were some of your influences for Unlikely Prescription?

MONOXIDE: I’m a fucking huge fan of Rob Zombie. Whatever the fuck he feels, that’s coming out. Huge fan of Sully [Erna] from Godsmack. The guy’s voice is awesome. I was a huge fan of Chester Bennington. Now, we’re creeping into their backyard. I want to make sure they don’t see us and are like, “The fuck are you doing here, man?”

MADROX: Also, shit like Black Sabbath. I think there’s something to be learned there about simplicity, where less is more. If you listen to 13, that last record that they did, they went back to their roots, and it’s so less but [also] big and full.

What are each of your favorite songs from the upcoming record?

MONOXIDE: “Corkscrew” is what I call it.

MADROX: I was going to say the same thing!

MONOXIDE: I think it’s the one that people are going to hear and be like, “Fuck yeah! They are fucking here to stay!”

MADROX: I can describe it as Resident Evil meets The Matrix with vampires and fucking monsters, and there’s [a] gun battle. It’s 900 miles a minute, and it’s coming at you, and you’re like, “Oh man, that song is so good.”

After you’ve cranked your device as high as you can, hit the link for “Perfect Problem” and get your first dose of Unlikely Prescription below.

Editor’s note: This article was amended on Jan. 13 with an updated June 2021 release date for Twiztid’s upcoming album.