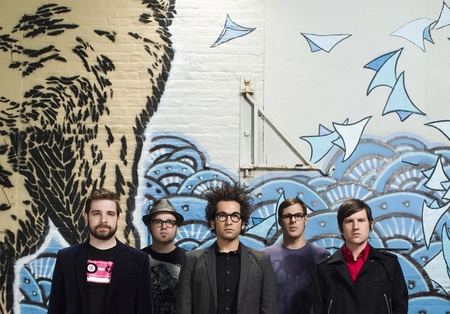 The members of MOTION CITY SOUNDTRACK tell us the stories behind each song on My Dinosaur Life.

Worker Bee
Justin Pierre (vocals/guitar): “The basic outline of this song came to me one night while I was wandering around my apartment with an acoustic guitar. I wrote almost all of the words in one sitting, and it seemed to me that this song was destined to be the opening track. Its purpose was to pick up where [2007’s Even If It Kills Me] ended and set out an outline or course of what is yet to come. I went through a rough patch or two, but came out okay on the other side. This song is about staying positive. To be self-congratulatory defeats any act of accomplishment, therefore I had to; it made me laugh. Try as I might to be serious, I cannot resist the tongue-in-cheek.”

A Lifeless Ordinary (Need a Little Help)
Tony Thaxton (drums): “We wrote this song in the fall of 2008 during our first writing session in Minneapolis, Minnesota. I think this was the first thing that we wrote [for the album] that got us really excited and seemed like it had a lot of potential. I remember when we first started it; it was a bit slower and almost had a ‘You Don't Know Me’ [by Ben Folds] kind of thing going on. We kept playing with it until it finally became the way it appears on the record.”

Her Words Destroyed My Planet
Pierre: “During a break in the recording of My Dinosaur Life, I was back in Minneapolis watching the final season of Veronica Mars. I was traipsing about the apartment again with an acoustic guitar when I stumbled across the ugly and brutally honest intro and chorus to this song. I brought the idea to the boys and Josh [Cain, guitar] fleshed it out completely, writing the bridge and instrumental parts as well. I then wrote the rest of the words to what he had constructed. This is probably the most honest song I’ve ever written and it took writing the song to finally overcome the feelings I was writing about.”

Disappear
Jesse Johnson (keyboard): “This song is a sonic blast that made us feel like we were recording [2003’s] I Am The Movie again. It has the energy a band would have entering the studio for the first time. I think that’s what makes it so fun for us to play, since it harkens back to our youth and all the bands we grew up watching play awesome shows. It's always amazing to play this song and see the fans sing back with so much emotion.”

Delirium
Matt Taylor (bass): “We wrote this one in November 2008 during our first writing session for the album. After a couple minutes of jamming–I hate that word–Tony and I started playing the bass and drum part that you hear right at the top. I'm a sucker for when drummers play the rims of their drums with kick and snare. I think that’s Fugazi's fault. Anyway, all the parts of the song came together very quickly after those first few minutes. Once Justin added his vocals, the song ended up sounding frantic, desperate, confused and angry. It's my current favorite on the record.”

History Lesson
Thaxton: “’History Lesson’ is the one song on the record that was not done with Mark [Hoppus]. We recorded a version with him, but when we went into record some acoustic tracks this past fall, [producer] Ed Ackerson had an idea for the song that he wanted us to try out. We thought maybe it would just be an alternate version of the song. Once we finished it, we all ended up liking it more than the original version. We had just enough time to change the record to swap out those tracks. I think some early promos of the record even have the original version on them.”

Stand Too Close
Taylor: “Justin wrote and recorded the verse of this song as a little ditty for music for a movie. He played it for us while we were in the studio recording acoustic tracks for B-sides for Even If It Kills Me. We basically told him that we were taking the song and there was nothing he could do about it. We actually had trouble structuring this song because the verse is so catchy that we had a hard time finding a chorus that could even match it. The final decision was to let the verse be the hooky part and have a “B” part that served as a sort of anti-chorus. Also, Justin finally fulfilled his goal of working Busta Rhymes into a song.”

Pulp Fiction
Taylor: “"Pulp Fiction" started as a mostly electronic idea I had recorded at home on my laptop. I only had the verse and chorus parts at that time. I sent it to Justin while he was on a solo trip in Japan to see if he liked it. He put some vocals on it and immediately sent it back to me. Then we played it for the band and everyone liked it, so we demoed the two parts with real drums, guitars, and bass. We didn't have a bridge for the song until we got to pre-production with Mark.”

@#[email protected]!
Johnson: “Otherwise known as ‘Motherfuckers,’ this is a really catchy tune. Right off the bat, we felt like it was an awesome song in the vein of Weezer–whom we all listened to as high school students. Justin has a habit of writing lyrics that just fill the space of the melody while we are writing. He usually finds different words for the final version. That’s where all the cussing came from. It wasn't supposed to be in the final version of the song, but it just got stuck in all of our heads. We can all connect with the nerdiness of the song since we are all quite nerdy still. When we thought about song titles, we didn't want to put curse words on the back of our album. That's why we went with ‘@!#[email protected]!,’ which is an actual quote from the video game Q*bert. Nerds!”

Hysteria
Josh Cain (guitar): “In February 2009, we had to try new methods of songwriting due to Tony's broken arm. We had to work on our ideas at our individual homes and e-mail them back and forth to each other. I had the idea of ‘Hysteria’ sitting in my ideas folder on my laptop gathering dust for around a year. I spent a bunch of time with it and flushed out the rest of my guitar parts and then emailed it to Matt. He sent me the song back with bass, keyboards, handclaps, and programmed drums, adding some really great moments to the song. It was a bit different for us, but everyone seemed to dig it. Since Tony had to do drums after his arm had healed, we had no clue what direction he was planning on going with it. I remember sitting in the studio while he recorded the drum parts, finally hearing the song complete. He had put the final piece to this weird rocking song with some great drum fills that fit perfectly with Justin's frantic out-of-breath verse melody and anthem chorus melody making this song a band favorite.”

Skin & Bones
Pierre: “The original idea for this song came while we were recording Even If It Kills Me. I had a few lines for verses and part of the chorus, but I wasn’t sure where it was going. There wasn’t enough time to explore it back then, so we saved it for this record. I had this strange image in my head of two people sitting on the roof of a house at night in the fall, shivering slightly and silently together; their only comfort each other. I see this song as a melancholy anthem for those of us who really wish we were more than just a science experiment, but fear that that’s probably not the case.”

The Weakends
Cain: “In November 2008, we had come up with a very slow, pretty idea while jamming in Flower Studios in Minneapolis. A few days later, we wrote this very dark, rocking part but had no idea where to go with it for a verse and chorus. We decided to take that slow, pretty idea and speed it up and see if the two ideas fit together. The parts worked well together, making it easy to write the chorus and bridge. We were a little bummed because we loved the slow, pretty idea so much and didn't want to throw that idea away. We tried it as an intro, and went back and forth about it without ever making a clear decision until we started pre-production with Mark, who said he liked it as the intro. Justin wrote some intense, sad and yet uplifting words–some of my favorite on the album–pulling this angry, dark rock song together.” alt