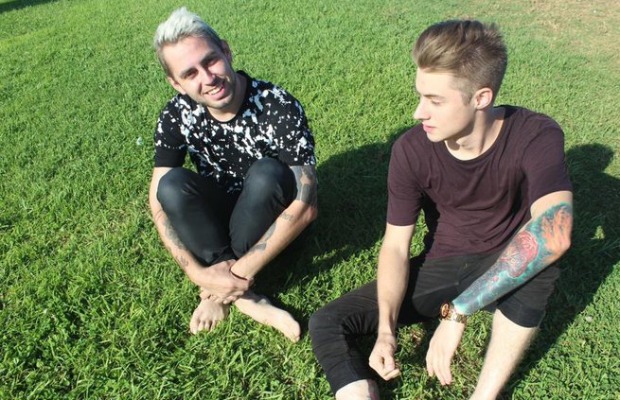 This morning, Tyler Carter (Issues) and Luke Holland (the Word Alive) revealed their cover of Paramore's “Ain't It Fun” with a new music video. In anticipation of Punk Goes Pop Vol. 6's release, we caught up with the pair yesterday to chat about how the cover came together, what their future plans are, and, uhm, the nature of Holland's relationship with Carter's mom (?).

Can you tell me the story behind this cover?
TYLER CARTER: Well, [Fearless Records] asked me to do it solo, since my bands have done the last couple Punk Goes [compilations]. I was super into it, but at the same time I just felt like “I don't really know how to make a punky-rocky-spunky version of it by myself.” Luke and I have been doing a lot of collaborations on YouTube and I just thought it was the perfect chance for us to get to do another one. We were just kind of working around each others clocks for a while.

You guys are always on tour with Issues and the Word Alive. When did you find time to knock this cover out?
LUKE HOLLAND: It was literally right after Warped Tour. I had a flight out to Tyler's place in Atlanta. Set up in a couple hours and ended up recording at like two in the morning. Tracked everything really, really quickly and just got it done.

CARTER: Yeah, it was pretty crazy. I had 36 hours off after Warped Tour and we spent that doing the cover. Then I flew to China [with Issues] and Luke flew to Korea to do some shit with the Seoul Drum Festival. We're nonstop with working. It was just another thing to do and another accomplishment.

So you got to record in the same place.
CARTER: Yeah, actually. We recorded together in my studio setup at my house. DW Drums, who sponsor Luke, had a kit delivered to my house, which was pretty awesome. We had Cameron Mizell at Chango Studios mix it, the turnaround's really smooth and we went out to LA to film it because we wanted a little more of a Venice Beach feel to it. We went out there after I got home from the Issues world tour and shot a video.

Did you have other options on the table or was Fearless Records like 'Hey Tyler, we want you to cover “Ain't It Fun?”'
CARTER: They had said that they wanted me to do something upbeat, but the first thing we talked about was trying to get them to clear Ariana Grande's “Almost Is Never Enough.” I was thinking about trying to do it with a girl from our scene; Maybe Jenna McDougall [Tonight Alive] or Tay Jardine [We Are The In Crowd], I don't really know. But then “Ain't It Fun” got added to the list at the last minute and I was like, 'Oh my god. I have to do “Ain't It Fun.”' That's such a contagious song at the moment. So I was like, 'Whatever, let's do it.' I thought we could definitely do our own rendition of it, because it's such a timeless song. How do you feel about that song, Luke?

HOLLAND: When you hit me up to do it, I was super-stoked because that song has a percussion-base, a really good feel to it. So I was excited. It's upbeat—that allowed for me to kind of experiment with it, too. I didn't have to just stay strictly with the beat. I got to have some fun with it.

Were you surprised when “Ain't It Fun” became such a pop-radio hit? I've heard it in the grocery store.
CARTER: Yeah, it's blowing up. I mean, obviously we can say Paramore came from our scene, but they're doing great things and have really broken out. I think it's cool how they're still pretty loyal to the AP scene, because they were raised in this scene, but it's awesome to hear it on the radio. I feel like it's the first opportunity that a band raised in our scene has had a smash single. It's pretty incredible.

Did you have any reservations about covering it?
HOLLAND: No.

CARTER: No, I don't think so. I mean, I chose it off the list, like I said, it's a contagious song. I've been stuck on it for a while, so I was excited for it and excited to do our own thing to it.

I guess the only reservation is a bunch of kids being like 'Paramore's not pop! They're punk!' or whatever. You know what I mean? Punk Goes Pop started as the idea of punk and metal bands covering pop songs, but I mean, it just rolls off the tongue. Punk Goes Pop—but it doesn't mean that it's super-categorized. There's a lot of different bands that go in and out of that.

Do you know if Paramore have heard your cover yet?
HOLLAND: I showed it to Aaron Gillespie, the ex-drummer of Underoath who now plays for Paramore, and he really enjoyed it. I wanna see if he's gonna show it to Hayley [Williams] or not.

CARTER: Yeah, I talked to their manager about it a little bit. He thinks it's really cool. Who knows, maybe they'll give it a shout out on Twitter or something. Not too bothered, I'm sure a lot of people do covers of that song. It's a really big song, you know?

What was your favorite cover on the latest Punk Goes Pop, besides yours?
CARTER: My favorite one is definitely Upon A Burning Body with Ice-T (“Turn Down For What”). There were some covers on the record that I thought were gonna be  better than they actually were—and I'm sure that's how some people feel about ours—but that band, that song was flawless. God, I see such a badass in it. Seriously, they couldn't have done a better song. The whole record's really good and everybody should go buy it.

Now that you've released the music video today, does that wrap up the project?
CARTER: Yeah! I think so. I mean, doing some press and stuff for it, but we're both on tour and we've been really busy. It was a fun cover, I just don't want people to think we're riding off of this, because we both still have our own bands and our own music. It's really fun to do covers sometimes [laughs], especially when you can't get a song out of your head! It's fun to be able to put it on paper in your own way.

What's next for you guys, and are there more collaborations coming?
CARTER: Actually, me and Luke, we're not even friends anymore. He banged my mom.

Can I put that in there? [laughs]
HOLLAND: I mean, I had sex with Tyler's mom, but that was a couple months ago.

Yeah, we're gonna do more covers together. We just gotta wait for the perfect song to come out. There's a lot of things we could do right now, especially like half the new Ed Sheeran record, but I think were just waiting for that one song to come out where we're both like 'Dude, let's cover this right now.' Hopefully the timing will be right with us and our tour schedules, as well.

HOLLAND: [The Word Alive] are about to do this headliner, the Get Real tour. Come check it out. Oh, and I'm doing drum lessons on it if anybody's interested in doing that.

CARTER: Come see our bands on these tours! My solo record is done, we're trying to setup a release plan for that. alt