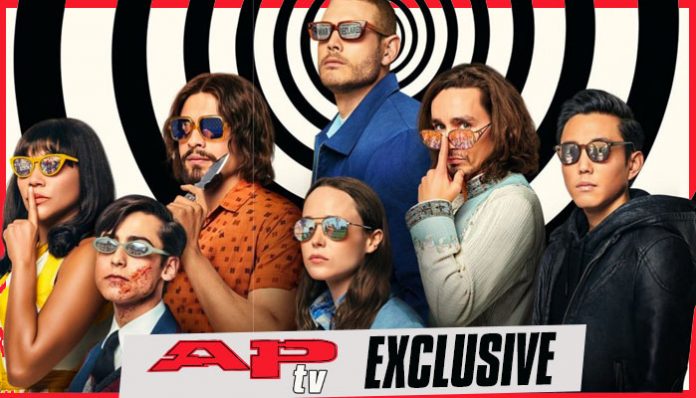 You’ve either never seen it or you’ve binge-watched it several times. The second season of The Umbrella Academy is the streaming event that beats back your pandemic angst. Gerard Way and Gabriel Bá’s story of the world’s mightiest, dysfunctional superhero family is filled with equal amounts action, hilarity and humanity. It’s fantastic escapism seasoned with uncorrected personality traits. Simply put, The Umbrella Academy works because it makes all of us feel like potential heroes.

No one can deny TUA’s amazing storylines, fascinating characters and the brilliant execution of it all. But the show wouldn’t have been given another season if the stans weren’t there for the signal boost. From the maddening symphony of Apocalypse Suite to the time-surfing wipeouts that mark Dallas, this series is a psychic buffet for hearts and minds the world over.

As cool, funny and abjectly terrifying as the show can be, there’s a great sense of humanity conveyed in each episode. Your typical Marvel movie franchise doesn’t allow for a whole lot of personal character development. (They need that time for all those fantastic CGI moments of explosions, wreckage and bad guys being violently eviscerated.) Showrunner/executive producer Steve Blackman made sure Way and Bá’s creations had that personal resonance. He wanted the Hargreeves clan to be more complicated than cartoony.

“I was inspired by Wes Anderson and how he creates dysfunctional family shows,” Blackman says. “I wanted to play into that with these characters. Their relationships were very real and very grounded but very faulty. They’re trying so hard to get it right, but they’re struggling. They had a bad relationship with their dad. It was really interesting to lean into the dynamics of this family coming together in season 1 and trying to be better than they were before. We’re all familiar with dysfunctionality. And that’s what [the Hargreeves family] are fighting against.

“In some ways, I’m trying to subvert expectation,” he continues. “I wanted this show to feel different. That dysfunctional people can be heroes. And that heroes can come in different forms. And sometimes, they fail spectacularly. At the end of season 1, they don’t save the world. Which is not really part of the trope of superheroes.”

Justin H. Min is philosophical about his role as the deceased brother Ben (Number Six). After aiding and abetting Klaus (Number Four) from the great beyond, Min carries the development of the character in a loving way.

“Sibling relationships are so interesting because it’s one of the few relationships where people get to see you from start to finish,” Min says. “Your parents unfortunately are older than you. They pass away before you get to adulthood. You meet your friends at different stages of your life. But siblings you get to see from the beginning and hopefully to the end. Because of that brother relationship, Ben does what he can to keep Klaus on track, as well as to just have some fun with him. I think Ben has way more fun with Klaus this season. After spending these three horrendous years together, Ben is fed up and is going to have some fun.”

Read more: Here’s the comic character who had to be in ‘Umbrella Academy’ season 2

The intersection of the TUA’s characters’ humility and their personalities really make viewers’ hearts sing. Watching a few episodes in one sitting, you want all of these characters to succeed. There’s no need for partisan cheerleading. (Spare us the hashtags of #TeamNine or whatever.) You want all the heroes to make it through and continue to kick ass, even if they stumble. We’re willing to bet you know somebody who goes through life like a Hargreeves. Maybe they’re quiet, sullen and introverted. Or maybe they function through flamboyance and humor. Like Robert Sheehan’s portrayal of Klaus, who wields pop-culture references like blades.

“I think [those references] were put in the series to make people laugh, to give reference points they could giggle at,” the actor says. “At the start of [Shakespeare’s] Richard III, [the actor] comes out to the audience directly and says, ‘Don’t tell anyone, but I’m going to become king by the end of this play.’ I think those reference points serve as a similar function. That means we, as an audience with Klaus, can all poke fun at [his] cult because they’re not in on the joke.”

David Castañeda sees his portrayal of the brooding antihero Diego (Number Two) as “extremely vulnerable, very chaotic and just aggressive to anyone who gives him the wrong look. Obviously, that’s very broad. But when you look at the more detailed relationship between him and his siblings, he starts carving himself out as a more simple and solid piece. All of those [characters] like Batman and Wolverine have those tropes. Because they’re very humanistic…”

The depth and nuance of the characters is key to the allure of The Umbrella Academy. And while the ensemble is completely stellar in their roles as the Hargreeves clan, they do appreciate the work as fans, as well. The castmates have often wondered which characters they’d try on for size away from their assigned roles. Not surprisingly, the motivations are both philosophical and flippant.

Min wouldn’t mind playing Pogo, the Hargreeves’ primate caretaker and wise oracle. (“Because I’ve always wanted to speak with a British accent. And it would be fun to wear those motion sensors and to get play around in that suit.”) Sheehan ponders a life of Five, but even then he has some reservations. “Five has got some mad, odd stuff to do. But that said, I’d still want to be cast as someone who doesn’t have to do that much fighting. That’s a lot of extra-curricular activity you’re taking on board there. Who else is a pacifist? Grace! I’ll just cook the eggs and do the coffee…”

Both Ellen Page (Vanya, Number Seven) and Emmy Raver-Lampman (Allison, Number Three) cite the rugged antihero Diego. “There’s a lot of action and a brooding quality. But also in the second season, we’re seeing a much more sensitive side,” Page says. Raver-Lampman likes that there is “so much meat to his storyline with his and Lila’s relationship. Having somebody be able to break all his walls down. She really gets in there and gets to him. It’s really enticing to watch.”

Read more: 15 items you need to enroll at ‘The Umbrella Academy’ before season 2

It hasn’t been officially announced that The Umbrella Academy will return for a third season on Netflix. But there are plenty of clues ricocheting across the net that make it lean toward done-deal status. For right now, though, these are the superheroes who make us feel like everything is going to be all right. If (or when) the Hargreeves check into Hotel Oblivion, there will be plenty of characters to mishandle (and possibly lose) their emotional baggage. With The Umbrella Academy, art certainly imitates life. Even if it’s in all of the painful details we won’t deny.

The new issue of Alternative Press takes you behind the scenes of The Umbrella Academy. We’re loaded with stories and details, from the music selection all the way to the tips of The Handler’s shoes. Get your copy below!