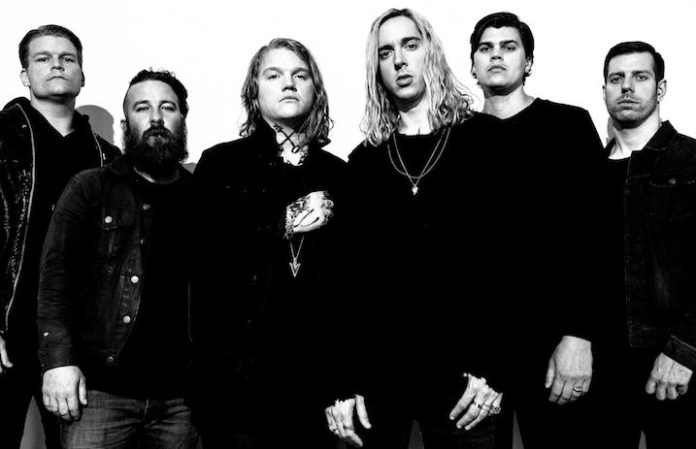 Describing the lead-up to Underoath’s new album as “controversial” is like saying detonating an atomic bomb in your front yard will kill your grass. Indeed, from the high-velocity acceleration of the first single, “On My Teeth,” to the metalcore progenitors’ attitude toward their art, their lives and each other, fans have been embracing or trying to fathom where the band are coming from on Erase Me. In the latest issue of AP, the band talk about everything from the stress fractures that had set in between them, all the way to their reunion tour and the music they’ve made to celebrate their reconvening.

READ MORE: Underoath push back at fans upset over swearing in new song

One thing some fans have been shaken by is the band’s current mindset. Once identifying as members of the Christian faith, the members of Underoath have chosen not to align themselves within any realm of the contemporary Christian music scene. Not only does vocalist Spencer Chamberlain drop a couple f-bombs across Erase Me’s 11 tracks, he no longer practices or identifies with Christianity. Drummer/vocalist Aaron Gillespie says he is spiritual but has no need for organized religion, while other members are still active in their community churches, without carrying the hardline attitudes attendant in some doxologies. Some fans are perceiving this as an affront or a betrayal, but the band aren’t going to be wearing corpse paint and getting upside-down cross tats anytime soon.

“I feel bad for people who wouldn’t listen to the new album simply because there’s no proclaiming of Jesus anymore,” guitarist James Smith says. “If that’s the reason you’re not listening, that’s just sad for me to hear. I think art is created by any and everyone. I think there was a time when [the Christian aspect] was a main focus for the band, and then it wasn’t, but we were still making art. I don’t think it was anything to get hung up on. I don’t feel like we have to be the band that we were in order to get [fans] to come back to us.”

During promotional interviews for the Chariot’s Long Live album, frontman Josh Scogin was impressed when this writer informed him that some fans of church-burning black metal loved the chaos the Chariot had captured on that album. The dichotomy of Scogin’s personal belief system against the ugly brutality of black metal meant that those people were engaging solely with the stuff coming out of the speakers. It’s a topic that resonates with Gillespie, who details his dealings with the business side of worship music in AP’s Underoath cover story, out now.

“From what I remember, Josh is a pretty conservative Christian,” Gillespie says. “It’s been a while since we’ve spoke. But I don’t think he drinks or uses swear words: I don’t know if that’s true, because you can’t trust hearsay. But how many Christians would look at the Chariot’s music and give them that same chance? None—or very few. And that’s the mold I want to crack. I wonder how many other people of faith have given other types of music the same chance they gave us. I just don’t think music should have a faith. The concept of ‘us and them’ is a term that can really fuck up rock ’n’ roll.”

“We’re all in a different spot in our faith,” keyboardist/programmer Chris Dudley says. “But the one thing that we can all agree on is the idea of ‘I don’t know, but…’ I’m excited to be able to explore that sort of topic with people individually.” He considers himself a Christian but stresses that his faith is different than where it was five or 10 years ago. “I think that when you tell people you’re Christian, you automatically get dumped into the evangelical group. Although I do not identify with that group, I would rather call myself a Christian and say that I identify with the teachings of Jesus as opposed to, ‘No, because these people have done harm to that name.’”

“One of our main focuses is being honest people,” Dudley continues. “If we continued to call ourselves a Christian band, that would be 100-percent not honest and we’d be faking it—and then what we were doing onstage would become an act. Over the years, people have really resonated with that. I think there’s a lot of truth to us discovering our band living in a conservative Christian culture and then, by being allowed to listen to us, having been discovered via Christianity. But I think there’s also something to be said about the growth that those people have gone through, as well. As you grow as a person—as a music lover, as a Christian—your eyes become open to a lot more. There are so many songs that deal with doubt and what it is you believe in and trying to find that answer. And I think everyone can relate to that.”