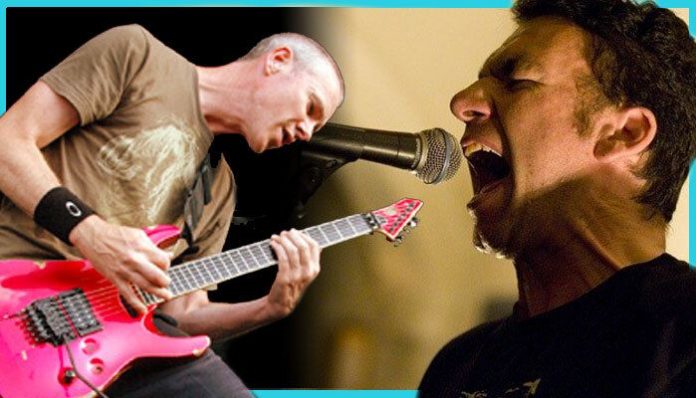 The 1990s started out with DS-1 distortion pedal grunge bands viciously stomping on the global spandex-wearing hair-metal movement from the decade before and ceremoniously ended with the rise of the baggy-pant rockers of nü metal and bleached-blond boy bands with chiseled faces, courtesy of TRL. However, some incredible acts and songs fell under the radar during this time. These 20 underrated ’90s bands should’ve gotten some Times Square love as well. Check them out below.

As blink-182 would say, pop punk wouldn’t exist at all without Descendents, and ALL are The Godfather Part II-esque quality sequel to themselves with a different singer but the same amount of power and grit. ALL would forever be mentioned in the same breath and compared to Descendents, and they released nine sonically consistent full-lengths that sold respectable amounts. But the band never truly climbed to the heights of their predecessor. It’s a shame, as ALL were a more than solid pop-punk group in their own right.

Two frontwomen who sing in perfect harmony? Check. The best punk-ska songs that you never heard? Check. The sad truth that Berkeley, California’s Dance Hall Crashers never got as big as ’90s ska superstars the Mighty Mighty Bosstones, Reel Big Fish and Less Than Jake is an abomination. Fun fact: The original version of DHC had ex-Operation Ivy guitarist Tim Armstrong and bassist Matt Freeman in it just before the two of them formed a band you never heard of called Downfall and a band you most certainly love called Rancid.

Stop what you’re doing right now and spend the next 41 minutes in total bliss while listening to Far’s now-classic fourth LP, Water & Solutions. The Sacramento quartet were the perfect combination of the beauty of Jimmy Eat World and the aggression of Deftones but released an emo classic a few years too early to be a part of the genre’s global boom taking place in the next century. We never underestimate the destructive power of change.

Searching for perfect ska-punk from the Midwest, specifically Kansas City, Missouri? Well, pick up the Gadjits’ 15-song sophomore album, At Ease, and marvel at the incredible musicianship of the uber-young band whose average age upon signing was 17 years old. Also, you can smile at the fact that they were a family band. Fun fact: At Ease was their debut release for the legendary Tim Armstrong of Rancid’s Epitaph Records subsidiary label Hellcat Records, which hit it big with Los Angeles’ the Interrupters.

Possibly the biggest band on this list, New York City’s alternative-metal rockers Helmet seemed to constantly be on the possible brink of a grunge-like movement. But sadly, it never happened for ’em. They definitely had the industry cred, as they were critical darlings for both journalists and fellow musicians, but it’s speculated that they may not have been metal enough for metalheads to truly embrace or were too metal for alternative kids to latch on to. Catch-22. Either way, you have four ’90s LPs (and four post-’90s albums) to keep you company in the meantime.

While frontman/guitarist Ariel Rechtshaid would eventually go on to be an A-list producer/songwriter for such acts as Adele, HAIM and Vampire Weekend, his ska-punk band the Hippos were superstars in their own right. Releasing their debut album, Forget The World, on formerly underground label Fueled By Ramen in 1997, the Los Angeles group almost hit the big time when they signed to Interscope Records in 1999. For their sole major-label outing, Heads Are Gonna Roll, they ditched many of their ska-punk influences for keyboards and released the minor hit single “Wasting My Life” only to break up in 2002.

Washington, D.C.’s Jawbox were unsung legends in their own right. The band had the distinct honor (or scorn, depending upon who’s talking) about being one of two Dischord Records groups (Shudder To Think were the other) to make the leap to a major label after fanfare on an indie and released two solid full-lengths for Atlantic Records before calling it quits in 1997. Thankfully, they’re playing Riot Fest next year.

Indie/emo supergroup Jets To Brazil (featuring members of Jawbreaker, Handsome and Texas Is The Reason) never climbed to the heights and lore of Jawbreaker but released three superb full-lengths before breaking up in 2003. Reunion show, pretty please? Until that event happens or doesn’t, we’ll always have the 11 beautifully verbose songs on late-’90s classic Orange Rhyming Dictionary to rock the fuck out to.

Here’s an extremely bold opening line: Sonically and artistically, Jellyfish are the ’90s’ answer to Queen. We said it. Sadly, the San Francisco group only lasted for five years, making two epic musically intoxicating albums that the band’s cult-like superfans cling to like their lives depend on it. And we have a super-special soft spot for lead singers who also drum like the prolific Andy Sturmer. So join the fan club, and all will be forgiven.

Say what you want about Maroon 5, but you can’t deny singer/guitarist Adam Levine’s talent and musicianship. Why do we bring up the ginormous pop act known as M5? Well, 100% of Kara’s Flowers is fourth-fifths of the original Maroon 5 lineup. What do the band sound like? Well, they signed a deal with Reprise Records before every member could legally drink and wrote songs in the youthful power-pop genre, easily fitting in with mainstream ’90s rock superstars such as Green Day, Weezer and Third Eye Blind.

If Helmet are in fact the biggest band on this list, then Nada Surf are likely the group with the biggest hit single listed here. “Popular” was a post-grunge tune that some would argue delved into novelty territory, but it completely and totally dominated MTV in 1996. Regardless of your take on the song (we love it), few ’90s fans could have foreseen that they would be around for eight more full-lengths and have an extremely ardent fanbase.

Washington, D.C. has no shortage of people fueled by booze, and ska-soul pioneers the Pietasters are no exception. Like they did with the Gadjits, Hellcat Records also hit the mark on this one. Motown certainly got a ’90s party and a resurrection on 1997’s Willis.

Rocket From The Crypt

Horns, but no ska! Just sweaty, greasy, good old fashioned rock ’n’ roll from San Diego’s finest and most legendary band, Rocket From The Crypt. RFTC seemed on the brink of radio success with “On A Rope,” but it just never got past 120 Minutes. Still, they have enough cult fans to justify free lifelong admission for those with RFTC tattoos on their body. Runner-up to this list: Drive Like Jehu (which also features RFTC frontman John Reis).

Southern California’s Sense Field released five powerful full-lengths and eight EPs over the course of their prolific 14-year career. During the ’90s, they experienced a lot of love from the emo underground with three perfect LPs, and the band eventually had a taste of mainstream pop-alternative success with 2001’s “Save Yourself.” Sadly, singer Jon Bunch passed away in 2016. What a voice.

Santa Barbara’s Snot released their funky and punky metal debut record, Get Some, in 1997, and it seemed like everyone in the Ozzfest circuit went crazy for the group. They were definitely on the verge of getting huge outside of the metal world, but tragically singer Lynn Strait and his iconic dog Dobbs (who lives on forever on the album cover for Get Some) were killed in a car accident when the band were working on their second album in late 1998. Snot then called it quits for 10 years after Strait’s death and reformed for two separate reunions, one of which featured future Bad Wolves vocalist Tommy Vext as the new frontman.

Less Than Jake have gone on record saying that they wouldn’t exist without Snuff. It’s hard not to hear their influence on the legendary Florida ska-punk band. If you take a listen to the British act, you will hear the sounds of a punk band getting into a drunken bar fight with an intense horn section, and the listeners are the true winners. Fat Wreck Chords ruled the ’90s with acts such as No Use For A Name, Lagwagon and Strung Out, but Snuff definitely fell under most Fat Wreck fans’ collective radars. Change that shit now.

And now we’re onto the smallest band on this list: Orange County’s Teen Heroes. If you’re from Orange County and you went to rock shows in the late ’90s, you likely saw this band at Anaheim’s Chain Reaction. And they weren’t ska in any way, shape or form. If you caught Reel Big Fish on tour with Zebrahead in 1999, you may have seen them outside of California. But they weren’t rap-rock in any way, shape or form, either. Honestly, they took more cues from Weezer and Elvis Costello than the Warped Tour world. If only they had more radio listeners.

Texas Is The Reason

Contrary to popular belief, New York City (not good old Texas) gave birth to Texas Is The Reason in 1994, and the five boroughs haven’t been the same since. The emo band broke up shortly after their first and only album, Do You Know Who You Are?, was released on Revelation Records, on the eve of signing a major-label deal with Capitol Records on tour in Germany in 1997.

The East Bay had no shortage of solid punk rock in the ’90s, and Tilt, with vocalist Cinder Block at the helm, were a welcome addition to the male-dominated scene. Fun fact: The band opened for Green Day from February-April on the 1994 Dookie tour. Fun opinion: Tilt should’ve been a lot bigger than they were, as they have a series of consistent LPs for your listening pleasure.

St. Louis, Missouri’s the Urge formed in 1987 while their members were still in high school. The band played their own original blend of funky metallic reggae ska and released three full-lengths for Immortal Records before splitting up for the first time in 2001. Thankfully, they reformed after another sabbatical and still play shows in the Midwest area. Jump right in.