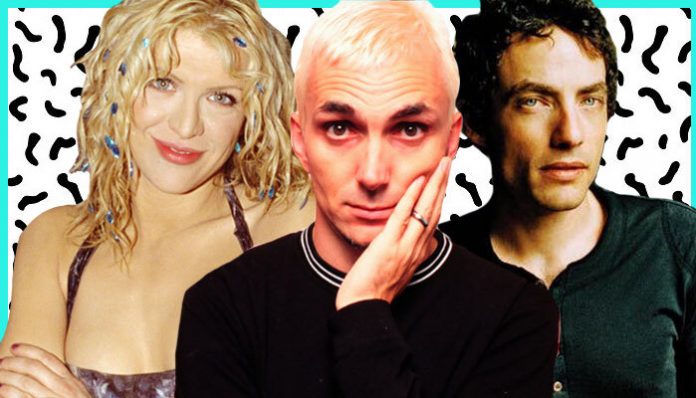 Nirvana. Pearl Jam. Green Day. These are three monster bands that people often name-drop when reliving the incredible and renowned legacy of ’90s music. Even if they don’t get mentioned in a reverential manner as much as many of their counterparts, some less “cool” bands end up defining a time period (and influence future decades) just as much as the trailblazers. What is hip doesn’t necessarily move units, and these 10 acts can sleep soundly knowing that they created pop-rock gems that will likely be heard at karaoke bars around the world forever.

Read more: These 10 unknown ’90s bands will make you wonder what else you missed

It’s nearly impossible to talk about Blind Melon’s history without mentioning the bumblebee girl from the self-titled album’s cover and the “you have to see it to believe it” music video for “No Rain.” Who would’ve thought that she would become a ’90s icon? Blind Melon brought the ’60s to the ’90s in a brilliant fashion and subsequently dominated radio. It’s a true tragedy that vocalist Shannon Hoon only had one more album left in him, as he unexpectedly passed away in 1995.

Is there truly a greater and more powerful bar anthem than 1997’s “Tubthumping”?  It’s definitely a difficult number to top. Chumbawamba ended up creating a more universally relatable song than pretty much every band who came before and after them. Naturally, this song would be heard at major athletic events, small and large parties and grimy pubs in perpetuity. Their label must have had a tough time sitting on this one.

There are certainly some hitmakers here, but none quite like Everclear. You may not realize it, but stop for a minute and marvel over their catalog: The band have so many popular singles, it’s hard to deny their influence on the decade. “Santa Monica”? Smash. “Father Of Mine”? Everywhere. “Everything To Everyone”? We could go on for much, much longer. Vocalist/guitarist Art Alexakis tapped into the global pulse and composed material that resonated with the mid-’90s rock crowd stronger than most other bands. As the century turned, he could certainly afford to buy anyone a new life.

Post-grunge is a thing, and Fuel perfectly hit the nail on the head with 1998’s megahit “Shimmer.” Their greatest achievement was being more than capable of composing beautifully tender ballads. Basically, there was truly something for unpretentious music fans from all walks of life with Fuel.

Just before Hole’s track (and album) “Celebrity Skin” came out, Courtney Love was one album into rock semi-stardom—and 7,000,000 theories into the general public discussing her involvement in the death of her husband, Kurt Cobain. Love became a powerhouse rock goddess as soon as this song hit the airwaves and MTV. The production was much more stacked on this than previous Hole records, and the band’s fashion choices were definitely amped into more of the “high fashion” demographic.

Not heavy enough for hardcore rockers and way too loud for the grocery store soundtrack demographic, Lit still found a way to have one gargantuan hit in “My Own Worst Enemy” and two minor ones in “Zip-Lock” and “Miserable.” Since then, the band showcased their mass appeal by playing at both the punk-as-fuck Warped Tour and the country-as-fuck Stagecoach Festival. Name another band who have done that, and then take your car out of our front yard.

Read more: Here are 10 bands from the ’90s you never heard and it’s a damned shame

While the Rentals are definitely the smallest act here, the band managed to influence so many other groups to combine Moog synthesizers and guitar distortion. The recipe just worked perfectly, and the band clearly foreshadowed Motion City Soundtrack and many other acts in the mid-’00s. Many would describe the Rentals’ sound as quite Weezer-y (which makes sense given that the frontman is former Weezer bassist Matt Sharp) alt-pop. Fun fact: SNL’s Maya Rudolph used to play in the band as well.

If you turned on MTV at some point during the early ’90s, this powerful music video seemed to be on repeat at least once an hour. And rightfully so, as “Runaway Train” was such a strong song with an important message. However, Soul Asylum were far from an overnight success: Their breakout hit “Runaway Train” was a single on the band’s sixth album, and it came out after the four-piece had already existed for 11 years.

Speaking of iconic music videos, “Bitter Sweet Symphony” certainly takes the cake (or at least one of them). Possibly the biggest song here, “Bitter Sweet Symphony” can certainly be credited as the single that got the Verve over in America for the first time. At that point in the ’90s, the band were already huge in the United Kingdom and quite unknown in the States. In addition, it’s responsible for bringing the Rolling Stones to a much younger audience, as the song sampled an orchestral version of “The Last Time.”

Hot take that will truly bring down the horse: The Wallflowers’ Jakob Dylan is a much, much better singer than his father, Bob. When it was originally released, “One Headlight” launched their career and caused a strong positive reaction with alternative and soft-rock fans in the ’90s. In addition, the track also found a way to update its audience with a rousing scene in Pete Davidson’s recent film The King Of Staten Island.