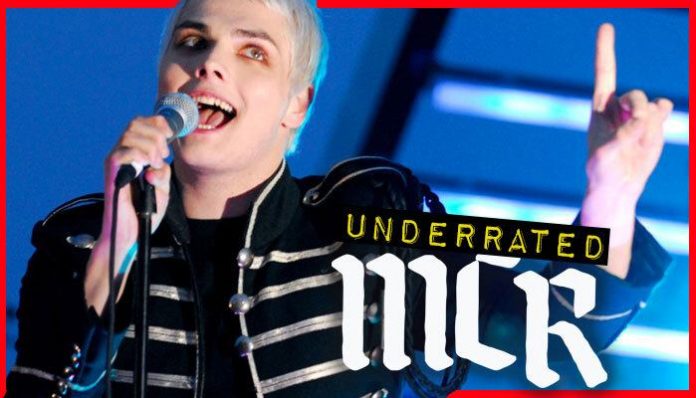 In a back catalog overflowing with radio-friendly hits and roof-raising singalongs, it’s easy for some monumental tracks to slip under the radar. Emo juggernauts My Chemical Romance are no exception, despite only having four albums’ worth of songs to define their career.

Delving into their discography with a magnifying glass, a laser gun and an open eye, we present the 10 most cruelly underappreciated efforts. Here’s everything from the B-sides that didn’t make the cut to the songs hidden in the shadows of hit singles.

Paying homage to their chaotic punk influences, “Save Yourself, I’ll Hold Them Back” emerged in the grand scheme of the Danger Days era as the ugly duckling. Outshone by vibrant radio hits and attention-hungry concepts, this fluid track got lost in the desolate post-apocalyptic scenery around it. Armed with neat singalongs and an infectious riff, “Save Yourself” should have been an adrenaline-fueled frontrunner of the Killjoys’ universe and a staple of MCR’s live show.

In keeping with Three Cheers For Sweet Revenge’s overarching theme of movie genres, banditry and Wild West capers arrived on the scene via “Hang ’Em High.” Taking its name from the 1968 Western movie starring Clint Eastwood, the unexpected gun-toting edition of MCR deserves a position among their greatest hits. And not only because of its sneaky guest spot from Keith Morris of Black Flag and Circle Jerks fame. With a blistering punk pace and a menacing story to tell, this track skillfully slipped Bullets-era hysteria into their 2004 effort but ended up blasted out of the water by the rest of that album’s iconic moments.

Conventional Weapons, the collection of MCR’s best-kept secrets, holds on tightly to the band’s most typical emo output. How “Surrender The Night” didn’t make the cut for any album remains a mystery. It brings a contagiously heart-wrenching singalong that warrants a place in history books. The penultimate track released before their hiatus in 2013, this slickly produced effort carried a sentiment of perseverance in the face of adversity. It left something for fans to hold onto after hearing the soul-crushing news of the band’s split.

“You can sleep in a coffin, but the past ain’t through with you,” “We all get together when we bury our friends” and “I was killing before killing was cool”—some of MCR’s most contagious existential reflections surfaced on a rare track that didn’t even make it onto a fully fledged album. An entire dramatic rock opera neatly packaged into one song, there simply wasn’t enough room on The Black Parade for the loaded sass of “Kill All Your Friends,” a move which unfortunately cost this 2009 B-side the love it sincerely deserved.

The gloomy addition to the I Brought You My Bullets, You Brought Me Your Love era, “Early Sunsets Over Monroeville” falls by the wayside when standing beside the rest of the album’s action-packed energy. Telling a sorrowful tale of lovers torn apart by a zombie apocalypse, this early ballad’s morose, swaying melody is an ode to Dawn Of The Dead. Even its name memorializes the Pennsylvania town used for filming the zombie movie’s mall scenes. This criminally underrated track produced Gerard Way’s most devastating, heartfelt performance of his career. Rumor has it, the band had to leave the studio after seeing him transform in the booth beyond recognition.

Read more: My Chemical Romance nods you missed in “A summoning…”

Masquerading as a neon rebellion to fit in with the saccharine Danger Days era, “F.T.W.W.W.” from 2010’s The Mad Gear And Missile Kid EP is quite simply the dirtiest song the My Chem boys ever plucked up the courage to write. The main album’s apocalyptic concept outgrew this unashamedly filthy effort, but it deserves to be memorialized as the one time MCR unleashed their down-and-dirty side to their fans. Let’s face it: There aren’t many times we get to hear Gerard utter these immortal lyrics: “She said, ‘Come on, come on, kiss my battery/Come on, come on and fuck this whole wide world.’”

Amidst such a complex, jam-packed concept record as The Black Parade, its B-sides didn’t stand much chance for success. Had “Heaven Help Us” belonged to the previous Revenge era, it would have knocked its peers out of the park. However, its relegation to the extras of an already astounding album made it a drop in the ocean. Making a heartfelt plea for divine intervention, this cry for help is as powerful as they come, even by My Chem’s standards, and this display of emotional depth needs to be heard.

Read more: My Chemical Romance reschedule US return tour for 2021

After delivering the likes of the morose “Helena” and the angst-ridden “I’m Not Okay (I Promise),” you’d be forgiven for thinking Three Cheers had worn itself out by the time its closing track arrived. The rapid-fire “I Never Told You What I Do For A Living” emerges as the most complex and unpredictable composition of My Chem’s entire career, closing off a memorable era in unforgiving style. From obscene implications to murderous intent, making a pitstop at sea-shanty vibes and the filthiest breakdown this side of death metal, this track refuses to shy away from a challenge.

The stirring single that soundtracked the trailer for the post-breakup greatest hits compilation May Death Never Stop You almost faded into obscurity amid the buzz over the band’s first output since their split a year earlier. A eulogy to MCR’s history that brought back vivid reminders of every emotional era, 2014’s “Fake Your Death” is the swan song fans needed. It was a fitting farewell that sadly missed the credit it deserved for closing the band’s chapter in the most tear-jerking manner they could muster.

Bullets was such a monumental introduction to a genre-defining band known as My Chemical Romance. The dramatic “Drowning Lessons” shouted into the echo chamber but never fully received its dues. An astounding performance from guitarist Ray Toro fronts their talents that predates the existential theatrics of Revenge, holding onto heart-wrenching lyrics and a show-stopping closing singalong that would work phenomenally live. That is, if they would play it.