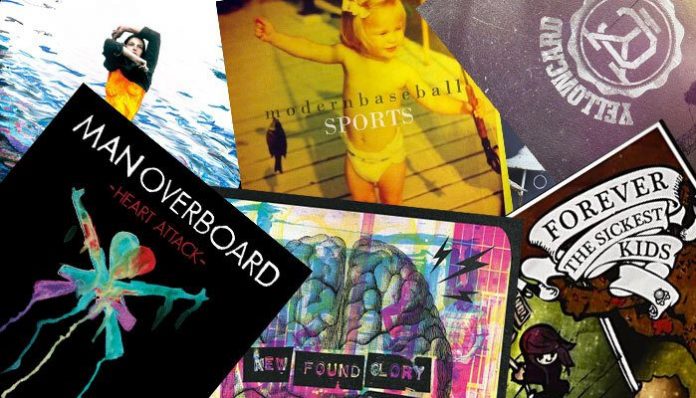 You probably abused the play button on your iPod, uh, we mean smartphone jamming to pop-punk gems in the 2010s. But maybe you missed a few or discarded an album that deserved more time.

Either way, we have you covered. Here are 20 pop-punk albums that warrant more respect from the 2010s.

Forever The Sickest Kids’ 2008 album, Underdog Alma Mater, shot new energy into the pop-punk scene. Then their self-titled encore in 2011 received mixed reviews. Yet, bangers such as “Keep On Bringing Me Down” and “Crossroads (I Guess You Can Say Things Are Getting Pretty Serious)” highlighted an album that was criminally underrated. Despite excelling on the Billboard 200, FTSK’s second major work struggled to expand the legacy of their first, maybe even spurring the band’s surprisingly swift disappearance. It deserves a better legacy than that.

Potentially the future flag bearers of pop punk, Hot Mulligan’s Pilot set the stage for their popular recent releases. The band blended the 2000s pop-punk sound with the “sad boi” style made popular in the decade’s earlier years. Pilot is a product of two generations of the genre. Maybe Hot Mulligan will set the tone for what pop punk sounds like in the 2020s.

Radiosurgery probably lives near the bottom of the New Found Glory discography. There’s the prime, early 2000s years and all the wonderful covers. Then there’s the popular partnership with Hayley Williams in “Vicious Love” followed by the mix-of-pace Coming Home. Finally, maybe we get to Radiosurgery lumped in with the 2017 release, Makes Me Sick. But the 2011 album is prime NFG, loaded with face-smacking tracks such as “Anthem For The Unwanted” and “Summer Fling, Don’t Mean A Thing.” It deserves to be in the regular rotation for fans of the band.

Dollar Signs deserve acknowledgment for everything they did over the past five years, not just This Will Haunt Me. They are an “everyman’s band,” a fun blend of emo, pop punk and ska. “Sadderday,” “Tears / Beers / Fears” and “Waste My Life Away” are all standout songs. Here’s hoping Dollar Signs continue building on their momentum and find a deservedly bigger audience in 2020.

Heart Attack got lost in the shuffle. The album came out as poppier bands such as All Time Low, the Ready Set and the “sad boi” corner of pop punk controlled the scene. While a key cog in the genre’s third wave, Man Overboard may not get the credit they deserve for their work in 2013.

Driveways’ first full-length flashed the band’s balance between post-hardcore and throwback pop punk. Night Terrors’ lead single “Drop Dead” is a great introduction to the Boston natives’ ability to change paces and keep their sound refreshing. “Blindfolds” is so old school, it hurts. “A Few Good Dreams” soars. Each of the songs stand out from one another, making this album as complete as one with only seven tracks can be.

“Sirens” is an anthemic, quick-paced and perfect opener. “Call Your Friends” is the quintessential party-punk zebrahead tune. The entire album oozes with fun. Maybe too much fun, with tracks such as “With Friends Like These Who Needs Herpes.” Nevertheless, it should have done more for zebrahead’s legacy.

Stand Atlantic were introduced to the scene with their 2018 debut, Skinning Dipping. The album’s opener, “Lavender Bones,” seems to be the band’s most popular tune, but there’s so much more to this record. Bonnie Fraser’s vocals soar in “Bullfrog,” “Speak Slow” has a serious kick to it and “Cigarette Kiss” is beautifully written. The Australian natives have been building off the album since and will surely surge in the 2020s.

Handguns get lost in the third wave of pop-punk bands. Everyone remembers groups such as the Wonder Years, State Champs and Real Friends. But Handguns’ 2012 album contributed to the scene’s comeback as much as anything else. “Stay With Me” was one of the better pop-punk songs of the decade. “Early Retirement” is quintessential early 2010s pop punk. The whole album is just perfect.

Ah, the last full-length including Tom DeLonge. Reviews were muddy, and some fans reviled the blink-182 comeback album that, expectedly, sounded like a love child between Angels & Airwaves and +44. Also, it doesn’t help the band cut the album from their live shows. But there’s plenty of greatness here—“Kaleidoscope,” “Natives,” “Wishing Well” and “Even If She Falls,” to name a few. The reunion album allowed fans to give the trio a proper goodbye before DeLonge followed his extraterrestrial instincts and the rest of the band altered course.

Read more: Trapt try to take on Danny Diablo after he sides with Ice-T in Twitter beef

Always a supporting act but rarely a headliner, Light Years toured across the world with pop punk’s biggest names. Yet, they were more talented and likeable than most. Light Years’ 2015 album reminded fans why this throwback bunch from Kent, Ohio, were probably the most overlooked pop-punk band of the 2010s.

Sports is another one of those albums that got lost in the shuffle in the early 2010s. The record isn’t too overbearing, avoiding the pop-punks tropes (whiny, contrived lyrics, etc.) at work at the time. Sports set the groundwork for Modern Baseball’s successful five-year run following its release. The band altered their sound, finding a more emo/indie tone with 2014’s popular release, You’re Gonna Miss It All.

What Matters Most features one of the best pop-punk songs of the decade in “Indebted.” It’s catchy, blends paces and features an irresistible hook. The rest of the album supports it well with tunes such as “August Is Home” and “Rather Be Dead Than Cool.” While never a band you’d see on the main stage at Warped Tour, Forever Came Calling were just as good as the legends they covered in their early years. What Matters Most is their best work.

The pop-punk darling’s first full-length catapulted them into the hearts of listeners everywhere. While the album is appreciated as a pop-punk success story, it’s massively underrated as a beautiful tribute to Illinois, the band’s home state. The genre giants cut their teeth traversing the Land of Lincoln, and this particular chapter in Real Friends’ history should be propped up on a pedestal.

Pop punk’s glimmer began to fade in the late 2000s. The “normies” returned to radio pop, hip-hop and country. Scene kids gravitated to emo and post-hardcore. That’s when pop-punk veterans Yellowcard galloped in Gandalf-like, glowing horses and all, reminding everyone that the genre wasn’t dead. Their comeback album didn’t have the bite of their previous work, but it did help reestablish a fanbase for younger pop-punk bands to grow from. When pop punk’s history is told, the album shouldn’t be forgotten.

Read more: UFOs are being spotted by Asking Alexandria, From First To Last and more

This 10-track album is full of gems. “Rumor Mill” slaps as an opener, acting as a driving tune with the band’s chemistry on full display. “On Your Own” is a standout track, and “Kiss Me Again,” featuring All Time Low’s Alex Gaskarth, still holds up. Best Intentions introduced the talented We Are The In Crowd to the world. But the album doesn’t seem to sit on a proper pop-punk mantle with its worthy peers.

Belmont’s self-titled album is tailored to lovers of both pop punk and easycore. “Hollowed Out” builds perfectly to a booming chorus. “Recluse” is unapologetically aggressive, and “Pushing Daisies” might be the best track on the album. Belmont’s rise to scene stardom has been slower than fellow Chicagoans Real Friends or Knuckle Puck but this album deserved to blow up.

This band deserve more downloads, period. “Eastbound & Down” and “Featherweight” are two of the best pop-punk songs of the decade, highlighting an album that flew under the radar in 2017. The band’s new song “Filthy” builds on their sound. Give WSTR a shot, people.

Old Bones was a bit of a scene hit. “Coffee Talk” reverberates on pop-punk playlists, while “Come & Go” just smashes. But “Storyteller” is the epitome of perfect pop punk in 2015, with a booming bridge, catchy chorus and nonstop energy. Broadside are effortlessly angsty yet maintain a clean sound that avoids overproduction. The band’s musicianship is second to none with excellent lyrics. Broadside’s Old Bones and subsequent Paradise (2017) should have elevated them to scene superstar status.

The American Dream felt like the second coming of Neck Deep’s massive 2015 album, Life’s Not Out To Get You. It has everything from the anthemic “More Like You” to the poppy “Friday Forever” and relatively toned down “Lavender Bay.” Of course, there’s the hit-worthy “You Can Count On Me.” For some reason, however, it didn’t latch on as tightly as it should have.