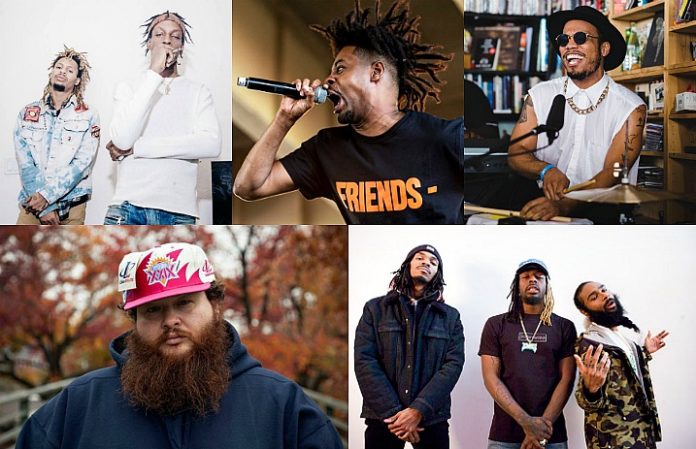 The rap and hip-hop industry is a highly competitive one. With constant clashes of ego and fame, it can be hard to distinguish the artistry from the hype. But take a glance outside the mainstream spectrum and you will see a thriving community of independent self-starters, instrumental connisseurs and lyrical vegabonds. Here are 10 shining artists who are making bigger and bigger waves in the alternative branches of the genre.

No one has served originality to the table the way the Flatbush Zombies have. They are a three-headed independent monster from Brooklyn, New York — with Erick The Architect producing both instumentals and rhymes, and Meechy Darko and Zombie Juice bringing their own bodacious flare that often provides for three very uniqe verses. Erick is precise, Meech is dark and Juice is bright; and this doesn't end with their music, as the trio also create their own videos, artwork and a whole bunch of limited-edition merch that's available on their website. Yet nothing's more impressive than their live performance, which showcases brilliant energy, stage-diving, mosh pits and some crazy visuals. Paying homage to a '90s icon, the Flatbush Zombies even feature “Smells Like Teen Spirit” once per set, making sure the crowd knows that it's time to move around. Remaining a completely unsigned group, the Zombies are one of the most impressive hip-hop artists on the rise in the last five years.

Hailing from the same borough of Flatbush in Brooklyn and childhood friends of the Zombies, the Underachievers deliver tracks ranging from “bangers” to those with a more conscious and spiritual vibe. AK The Savior, who is one half of the duo, orchestrates slick phrasing and quick flows, which pairs his style up nicely with his partner Issa Gold's swagger and punctuality. Both artists are able to blend their lyricism very heartily within the instrumentals, allowing most of their records to resemble a journey across many different types of beats. The Underachievers also know how to rile up a crowd, acting as two balls of fire on stage, while encouraging attendees to hop along in unison. Combining universal principles and their extremely diverse music tastes, this rapping duo have a positive future ahead of them.

Danny Brown is easily one of the most charismatic personalities in all of the industry. Whether it's his quirky smile or unmistakeable voice, the Detroit native brings a unique persona to the stage. Brown has risen from a past filled with adversity, but today, a song of his serves as the theme for ABC's Fresh Off The Boat, and another has appeared on HBO's Silicon Valley soundtrack. The 36-year-old MC also is known for his unconventional and sometimes lavish instrumentals, which also lead to some pretty crafty lyrical progression. Brown has also been featured alongside acts such as Kendrick Lamar and A$AP Rocky as well as performing at numerous large-scale festivals around the world. Although he may be an acquired taste, Danny Brown is offering a novel brand of avant-garde hip-hop that is only extending the genre's boundaries out further.

He's an emerging artist out of Long Beach, California that's been picking up steam for nearly three years now. Vince Staples initially gained recognition appearing alongside the likes of Odd Future and Mac Miller, but since the drop of his debut album Summertime '06 in 2014, he's experimented with everything from spoken word to heavily sampled instrumentals. Jumping around from dance-y club hits to that laid back west coast flow, it's no telling where Staples will take his career over the next decade. He's still blossoming at the young age of 24, and his exposure has already exploded into a brand new spot in a Sprite advertisement, which is a popular sponsor of many prominent hip-hop performers. Regardless if you're aware of his presence yet, it's no surprise that Staples has continued to surge into a variety of fresh listeners' ears thanks to his youthful approach on music.

This is the only artist on this list to have been nominated for a Grammy already — and that just came earlier this year! And even though Anderson .Paak didn't take home the hardware for Best Urban Contemporary Album, his latest record Malibu has catapulted him onto the scene with his diverse mix between traditional R&B and modern hip-hop. Earning critical reception, he found himself at the top of many year-end lists and opening for the prolific pop-star Bruno Mars, which came in large part due to his performances. Anderson .Paak and his touring mates, the Free Nationals, bring the full-band experience to the stage; and with full renditions of his songs done using guitars, keys and more, what makes the show even better is when .Paak himself hops on the drum kit and absolutely shreds it. Right now, he may be one of the most musically talented artists making a splash.