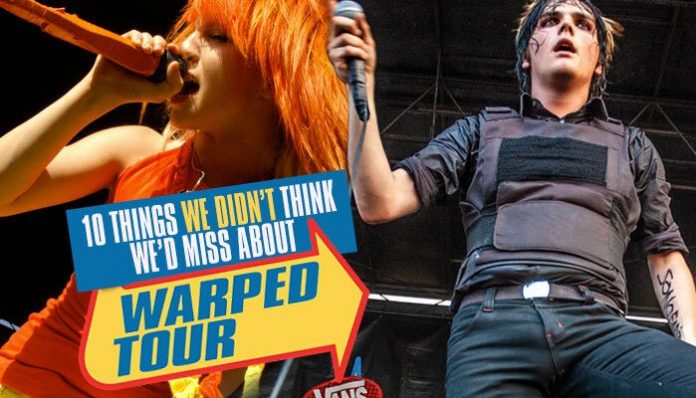 In 2018, Vans Warped Tour founder Kevin Lyman revealed that it would be the festival’s last cross-country run, ending a chapter in our scene’s history. Things officially came to a close after 2019’s short anniversary run, opening the door for new festivals such as Sad Summer.

While Lyman has hinted that something might be returning next summer, we’re currently left to reminisce on the tour’s magical 25-year run of incredible music and phenomenal nonprofit organizations. Discovering new music and catching your favorite bands live are some of the more obvious things we’re missing, but there are a few more Warped Tour experiences we never thought we’d miss until now.

Running on no sleep

Going hard at your favorite festival for hours on end in the scorching sun is a feat in itself. Add in little to no sleep, and it’s a wonder that more of us didn’t end up passed out on the pavement. Whether your lack of zzzs was due to pure excitement, anticipation or hard work narrowing down your long list of must-see bands, it was tough to be upset when you knew an incredible day filled with music and memories awaited you the next morning.

We’ve all gone to at least one show in our lives where we felt the need to arrive extra early to make it to the barrier. But even that doesn’t compare to getting in line for Warped Tour at the crack of dawn. As if attending on no sleep wasn’t hard enough, we then somehow convinced ourselves to get there before the sun came up just so we could be among the first in line. However, there’s something about the thrill of knowing you’ll be one of the first inside the venue that we can’t help but miss, and that alone makes up for the early rise.

Many festival attendees started off their day at Warped Tour by doing some good. Showing up with three canned goods, a $5 donation or a used cellphone for Feed Our Children NOW! allowed fans to skip the long lines that accumulated outside the venues. While carrying a bag full of these goodies across large parking lots was often a long trek, it was hard to beat the feeling of knowing you were helping out those in need.

Read more: Kevin Lyman hints that a Warped Tour replacement could be in the cards

We all suffered from the anticipation and anxiety of not knowing the schedule until the morning of. As fans raced from the venue gates to the giant inflatable schedule to start planning their day, many opted to fork over $3 to hold a paper schedule in their hands. It was thrilling to bust out pens and highlighters across the page, making sure you knew exactly where you needed to be and when—only to end up losing that precious piece of paper after your first run in the mosh pit. At the time, you felt like kicking yourself, but looking back on it, we can’t help but laugh.

Forking over $5 for water without a lid/cap

Unless you brought along your own bottle or found a way to cheat the system by bringing a handful of caps with you, chances are you were spending almost as much on drinks as you were on band merch. Dehydration is no joke, especially when you’re in direct sun all day long. While we all loved to complain about spending our money on overpriced water, you had to admit it was the best damn water you ever had. You simply can’t top the taste of that first glorious gulp after hours of moshing to your favorite bands.

Read more: That viral Warped Tour Reddit user will reveal themselves on one condition

Standing in the scorching sun, sometimes on the blacktop, for hours on end

It always felt like the hottest day of the year coincided with your Vans Warped Tour date. There’s nothing quite like standing in the blistering sun, sometimes on the scorching black pavement, trying not to pass out from heat exhaustion before you got to hear your favorite song. Considering today’s circumstances where many of us have been confined to our houses in quarantine, it gives us a whole new appreciation for being outside in hot temps while listening to phenomenal music.

Being torn between multiple bands

It was everyone’s Warped Tour nightmare. The two bands you were dying to see had overlapping set times on stages that were on opposite sides of the festival grounds. Who do you choose? Is there any way to catch both? Is it even possible to run across the venue in this heat without dying? At the time, this felt like one of the worst things that could happen at a music event, but now that we’re living in a world where live music events are currently not possible, we’d give anything to relive this “nightmare” again.

Read more: Here’s how you can relive your Warped Tour days in ‘Animal Crossing’

It never failed. You could lather on the highest SPF sunscreen possible and you’d still end up with the sunburn from hell. While constant application seemed to help a few people, there were some of us who were left feeling like we had just fallen into the sun. To make things worse, we thought it would be a brilliant idea to wear a shirt with a cute cut-out design, only to end up with the world’s most splotchy sunburn pattern. It was painful and sometimes miserable, but there’s still a small part of us that misses comparing Warped Tour battle wounds with our peers.

Lugging around a backpack full of merch all day

With the insanely high temperatures, long hours and extreme sunburn putting your limits to the test, the last thing you want to add in is a backpack full of merch. Go to the tables too early and you were stuck lugging around the extra baggage all day, but go too late and you risked the chance of missing out on a shirt in your size. Right now, we wish carrying around excessive amounts of band merch was our biggest problem.

The overwhelming smell of sweat

It’s undeniable that Warped Tour had a very specific, uh, smell. When you take hundreds of die-hard fans, add in blistering temperatures and a sprinkle of adrenaline, you’re left with a stench that even the world’s best deodorant can’t cover. It was overwhelming and sometimes foul, but there was something about the familiarity of it, knowing that the smell meant you were at one of the happiest places on Earth, that leaves us with a nostalgic hole in our hearts.