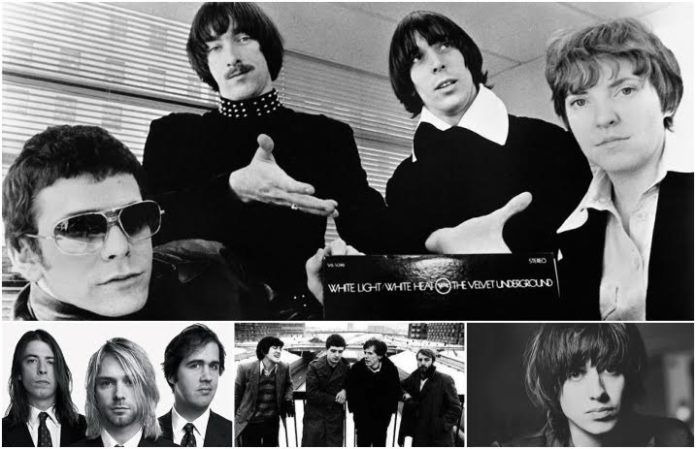 [Photo by: The Velvet Underground/Facebook]

“No one listened to it,” vocalist, guitarist and songwriter Lou Reed recalled of White Light to Rolling Stone in 2013, mere months before his death at 71. “But there it is forever—the quintessence of articulated punk. And no one goes near it.” Well, some people went near it: namely, forward-thinking bands such as Nirvana, Joy Division, Chapterhouse and others. Indeed, the Velvets’ diamond-in-the-rough classic of a sophomore effort made a big impression on the diverse rock acts of the ‘70s, ‘80s, ‘90s and beyond.

To celebrate the half-century milestone of the Velvet Underground’s White Light/White Heat, we’ve created a collection of cover versions spanning every song on the album. Check out the tunes below, and let us know your favorite in the comments. Just don’t mess the carpet.

The Strokes are no strangers to covering stellar album openers—just listen to their live take on Guided By Voices’ perennial drinking anthem “A Salty Salute” for confirmation—and frontman Julian Casablancas continues the tradition with this lively version of the VU’s album kickoff and title track, recorded for the short-lived HBO series Vinyl in 2016.

OK, we’ll admit it: It’s kind of hard to find covers of “The Gift,” the White Light track that’s essentially a short story by Reed recited by bassist and fellow VU founder John Cale, performed alongside a seemingly unrelated but fittingly reeling instrumental jam. That said, French experimental composer Rodolphe Burger’s loving rendition is a valiant entry if not for simply tackling the behemoth. (Burger’s 2012 album This Is A Velvet Underground Song That I'd Like To Sing is—surprise!—a full album of Velvet Underground covers.)

Chapterhouse displayed White Light’s profound effect on the early shoegaze scene with this swirling adaptation of “Lady Godiva’s Operation” from the ‘90s compilation series Heaven & Hell: A Tribute To The Velvet Underground, a string of reverent releases that featured other dream-pop and alt-rock heavy hitters such as Ride and Swervedriver. Life’s that much bolder with kaleidoscopic cover versions like this in the ether.

Perhaps the best-known Velvet Underground cover in the rock kingdom, Nirvana lent their rendition of White Light/White Heat’s most straightforward cut to a 1991 split single with the Melvins, the tune later being collected on 2004’s With The Lights Out box set and the 20th anniversary edition of Nevermind. More recently, Stranger Things actor Finn Wolfhard’s band Calpurnia tried their hand at the song…and, well, we give them an A for effort!

Yo La Tengo – “I Heard Her Call My Name”

For a song that was apparently never played live by its creators, indie stalwarts Yo La Tengo certainly give White Light’s squealing, bellicose elegy “I Heard Her Call My Name” a run for its money at this 2013 show. Performed as a tribute to Reed, the clip shows the trio doing a loose, exuberant version that suitably honors the character of the 1968 number.

Joy Division showed one way to earn a dollar when they unleashed this mesmerizing cover version of White Light’s closing track, the 17-minute avant-opus “Sister Ray,” at one of their final shows in April 1980. Sure, the live reading (which appears on the band’s compilation Still) clocks in at half the time of the original, but the Velvets’ subversive garage-rock spirit pokes through prominently in the interpretation from the late Ian Curtis and co. Play it on.