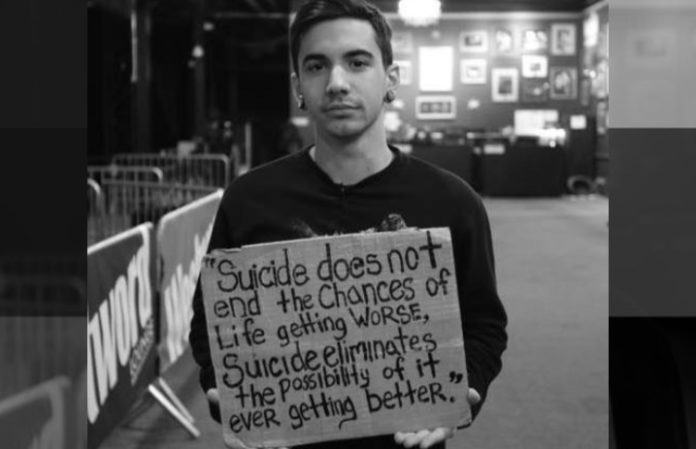 Rock four-piece, Vespera, are debuting a music video for “Paradise”—and it's an important one for the band: tackling addiction, depression and suicide.

“'Paradise' is a song I wrote about my own story,” says vocalist Jonathan Wolfe. “It’s a story that is far too common.”

The video is a joint effort between the band and The Jed Foundation, an organization that promotes emotional health and prevents suicide among teens and young adults. Wolfe went through intense training with The Jed Foundation to learn how to tackle said issues and communicate with his fans about them.

Wolfe is also sharing his own story and opening up about mental health, depression and his past thoughts of suicide with AP—in an effort to help people realize they aren't alone.

“I want people to have a safe place to talk about what goes on in their minds without being judged or ridiculed,” he says. “Maybe if we end the stigma, so many of us won't feel so isolated. I hope my story will help push the conversation of mental health in the right direction.”

When I first wrote “Paradise,” many of the conversations that have now opened up about mental health in the past few years had not yet begun. Of course, people have been having conversations about mental health for ages. But it hasn’t been enough. Just in the past year, we’ve watched helplessly as some of our greatest heroes have fallen victim to their mental health struggles. Yet, so much of the dialogue continues to be obstructed by a stigma that has made it unnecessarily difficult to confront these issues.

“Paradise” is a song I wrote about my own story. It’s a story that is far too common. But before I get into it, I want to say: I am extremely grateful that The JED Foundation [an organization that helps teens and young adults dealing with depression and thoughts of suicide] has helped guide me in opening up a proper conversation throughout this process. Though depression and suicide are difficult subjects to open up about, I want to start the conversation by putting my walls down and telling my own story in hopes to connect with those who have experienced something similar.

I remember the first time I thought about killing myself. I was sick and tired of the world, and I just wanted to escape all of the problems that surrounded me. I was 8 years old at the time. Throughout my teenage years, I always felt ostracized. I felt like a stranger who tagged along but never quite fit in. I became content just being a fly on the wall, merely existing in a world I felt I had no place in. As I grew older, these thoughts and problems only got worse, and my longing to belong made me feel more isolated than ever.

I moved away from my hometown at the peak of my first major wave of depression, chasing an opportunity to create a new world for myself in Los Angeles. I thought that living in a city with more like-minded individuals would finally put me in a better mental state. However, with time, I’d realize I had become further ostracized in my new city than ever before. People based my worth on my accolades and not on my character. Friendships became extremely fair-weather, and solitude had a special sting to it this time around. I felt expendable to not only my industry, but also to my peers, and that’s what hurt the most.

I remember the first time someone close to me died by suicide. My heart sank when I found out one of the only people I could talk to about mental health decided to take their own life. I felt like I had failed them. I thought that all of the time we spent talking might help change their perspective, but it seemed as if their mind had already been made up long before I ever came around. It made me question the validity of my own depression, and I began to spiral downward. I felt as if my own sadness had lost its validity because I didn’t have the willpower to end my own life. What some called having strength or perseverance began to reshape itself into feelings of cowardice and self-loathing. But this was only the start. As time went on, I continued to lose more and more friends to suicide, overdoses and addiction.

I remember the day something in me finally broke. For 18 months, I fought between keeping myself numb and having the courage to just end my life. Once again, I moved to a new city where I didn’t know anyone. I hit rock bottom, and my problems were only getting worse. I was convinced I no longer wanted to live. I felt beyond trapped. For months, I’d make continuous attempts to end my life and fail. I kept it all a secret by constantly staying inebriated. I hid under the guise of being a party animal, because I was afraid of what people would think if they knew the truth about me. I was a hypocrite; I proudly held a sign once that said, “Suicide does not end the chances of life getting worse. Suicide eliminates the possibility of it ever getting better.” Now, here I was trying to end it all because I felt I had hit a dead end.

I didn’t want to overwhelm people and scare them away. I’d answer my front door some days, minutes after vomiting a handful of pills or hiding a noose under my bed. I’d pretend everything was fine. I felt lost, and I didn’t want to impose a burden on anyone’s life. I would’ve felt terrible unloading all of my baggage onto people who I barely knew. Instead, I decided to self-medicate and live in the apex of my vices, destroying my health, my sanity and spiraling into such deep depression and self-doubt that I couldn’t imagine my life any other way. I began living as recklessly as the people I used to judge in my sobriety, and I became really good at pretending.

Eventually, things began to shift, and I found purpose in my life again. I strove to be better than before. Instead of focusing on what I had lost, I began to focus on what I still had left. I began to rebuild myself into a new person. Somehow, I mustered the courage to just be honest with myself and others about who I used to be. That’s when I realized I wasn’t alone. I learned to stop living in fear and shame. I began to open up about my life to people, and they would share their own experiences in return. My friendships grew stronger, and I felt a sense of belonging for the first time in my life.

However, that doesn’t mean that I’ve entered a world of sunshine and rainbows. The thoughts of suicide and depression still linger like an old coat in my closet. But rather than running to put it back on whenever I feel the chilling thoughts come around, I’ve found a new test of strength by keeping my distance and finding the courage to seek help when I need it most. Some days are better, and others are worse.

“Paradise” is the accumulation of everyone’s stories. So many of us suffer through our addictions and our depression in silence and shame. I just want people to realize that they aren’t alone. Many of us go through similar struggles, and it’s about time we put our walls down and begin connecting with each other. I want people to have a safe place to talk about what goes on in their minds without being judged or ridiculed. I want people to be better educated in understanding and dealing with mental health. If we end the stigma surrounding these issues and help educate each other, we allow those in need to come out of the shadows and find help. I hope my story will help push the conversation of mental health in the right direction and help people who are hurting feel less alone.

I highly recommend exploring The JED Foundation website: jedfoundation.org. The JED Foundation is a nonprofit organization that works to break the stigma by facilitating mental health programs in high schools and colleges. The JED Foundation recognizes that we need to open the conversation at an early age to equip teens and young adults with the skills and knowledge to help themselves and each other. Their goal is to make sure “mental health is recognized as part of general health and wellness and is not associated with shame, secrecy or prejudice.”

Many of us hurt the same way. We have to stop pretending it doesn’t affect us all. Together, we have the power to open and encourage discussions regarding these issues. Together, we can find help, connect with others and create a world in which our mental health struggles receive the attention they so desperately need.