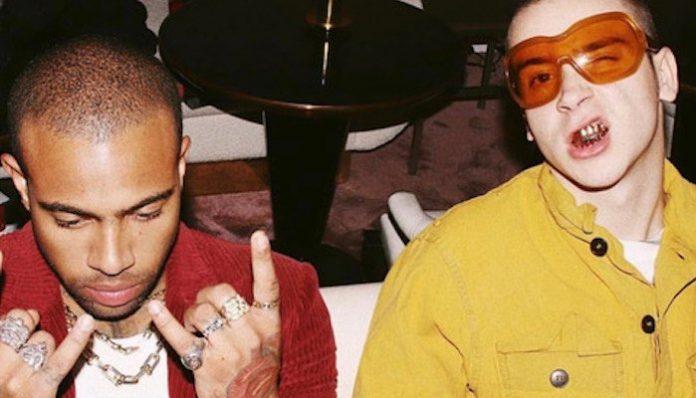 Vic Mensa isn’t just recently stepping into the punk-rock world; he’s been a resident for years. With 93PUNX, the name of both his punk project and fashion line, Mensa is dragging the community back where it started, and that’s far past the realm of music.

Mensa recognizes punk in its true form, as an extension of a lifestyle. You can spout copious levels of venom at the establishment onstage all you want, but if you aren’t living those words, is there any point? When it comes to his beliefs, the rocker is brandishing them on his back, literally.

Read more: Misfits trivia that only a super-fan will be able to ace

Before dropping two singles, “Camp America” and “3 Years Sober,” along with pointed imagery for the underground-inspired project, 93PUNX was focused on bringing gritty fashion sense to the forefront. This wasn’t anything new for Mensa, though. He had been dressing to dissent since he was a teen.

“I started changing stylistically when I was about 17,” he recalls. “Around when I got really into the Clash. That’s when I started to embrace aspects of that culture—that really inspired me stylistically with everything from the music to the politics to the fashion.”

The era that bred the Clash has been the driving culture behind Mensa’s custom fashion endeavors. The same forces that pushed the punk icons to meteoric success have been adopted by Mensa, whose attraction to patchwork threads come from the major players of “the ’77 scene.”

When shifting the conversation to the helms that steered punk regalia clear across the world, his voice quickens. The names burned into his brain weave into dialogue like a history professor looking back on cultural epochs.

“[The Clash] always would transition their style and had so many iterations and rebirths, and their manager Bernard Rhodes was always instrumental in a lot of that,” he says. “It all tied in with Vivienne Westwood and Malcolm McLaren, and that whole stylistic era is largely influential to me.”

He isn’t simply listing off names he skimmed over in a Wikipedia article, by the way. Mensa knows his material. Even more intriguing than his fascination with the people behind the fashion is the tailoring of the clothes themselves and the history faded leather can recall.

“I really love the approach of making clothing with a story and a life behind it,” he explains. “We make primarily items that are created from recycled items, from vintage pieces. You take things like a leather jacket from the ’50s that has 70 years of history behind it already, but then we add our own life to it.

“We add new stories on top of the stories that already exist,” he continues. “Cracked leather tells a story. Then we paint it, or we patch it, or you stud it, or you cut it. It’s adding a new story.”

Shifting back to his hip-hop complexion, Mensa ties together the numerous worlds that he finds himself jumping between. For him, making clothes has the same skeleton as producing rap music.

“It’s like sampling,” Mensa explains. “Hip-hop is based on sampling, and I feel, in essence, hip-hop is punk. They’re very hand in hand in their true form.”

Enveloped in the world of Joe Strummer and frayed attire, Mensa tied his love for punk culture with a neighboring fandom, skateboarding. While it’s usually function over fashion for skaters, the aspiring artist found a spark in the attire from his favorite member of the Baker skate team.

“Dustin Dollin. He was always so fresh to me,” Mensa remembers. “He would be skating in button-downs that were kind of ripped up and dress pants. Maybe with some suspenders or something like that. I really gravitated toward that.”

Mensa’s adventure isn’t just a designer cashing in on a trending subculture, either. As DIY as the patron saints of the underground he worships, 93PUNX products are as authentic as the attire they’re based on.

Cultivating an ever-expanding community of collectors, designers and flea marketers, 93PUNX is getting their material straight from the source. Sometimes through basements, sometimes through swap meets, but either way each of Mensa’s articles has its own origin story.

“Shit, out here in L.A. there’s just a lot of ill vintage,” he says. “You go to these flea markets or swap meets every week or every few weeks and you start to build relationships with the people that set up there every day. People get their hands dirty digging through old basements of 1950s clothing stores with helmets with lights on them, breathing in toxic fumes.”

Above his extensive network of collaborative suppliers sits Conrad Muscarella, Mensa’s key creative partner and 93PUNX co-founder.  What started as a two-person tailoring relationship rapidly expanded, leading to the pair sewing threads for others as well.

“We started off with Rad just making clothes for me to wear for shows, reconstructed jackets and pants that said ‘Burn Down The White House,'” Mensa recalls. “That was in 2015, mind you. People would always ask who made the clothes, so Rad and I decided to make it it’s own entity.”

Embarking into the catacombs of clothing’s past can seem like an archaeological endeavor. Rather than an expedition, though, Mensa’s journey is a nosedive into the wild and weird history of punk rock.

One of the singer’s premier pieces, a jacket decorated like a well-worn wall in the bad part of town, is a striking illustration of the culture behind the attire.

Read more: Top 10 artists proving genres are a thing of the past

“We just printed out all these tiny multicolor flyers basically and wheat-pasted them onto the jacket, a process similar to wheat-pasting and tore them. You know a wall that’s been wheat-pasted on so many times, and you tear something down, and there’s this collage of color from all the papers that have been on it? That’s what the jacket looked like.”

The shock value is obviously making an impression. Between punk-rock royalty and the commanders of the mainstream, it seems that everyone wants to rep 93PUNX.

With Travis Barker, Halsey and Lil Uzi Vert among the first to rock Mensa’s creations, one would think he’s starting a movement. With names such as Kid Cudi, Jaden Smith and Juice WRLD on the waiting list, that movement seems to have already begun.

gg allin: war in my head

Despite the soaring expectations around the brand, this is just Vic Mensa doing what he wants to do.

“Obviously, I’ve been doing music for a long time, and I’m way newer to doing clothes, but I really have just met so many people and known so many people in music for a long time that it’s not difficult to get clothes to them, because relationships already exist,” he says. “It’s cool because it’s coming from a different angle. I really like making clothes for artists and seeing them wear them. It’s fun.”