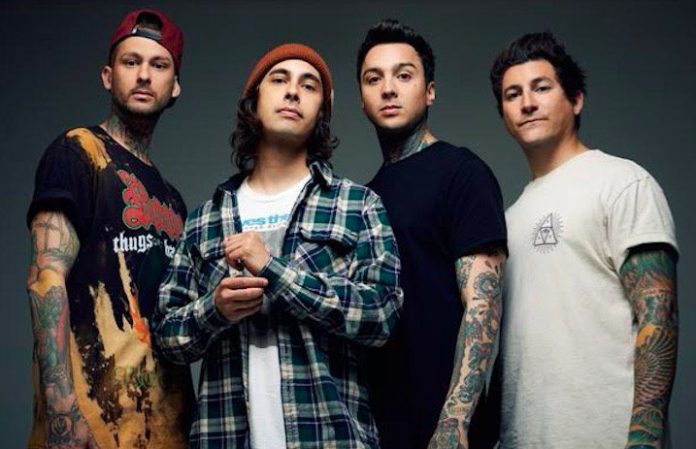 It’s been nearly four years since Pierce The Veil released Collide With The Sky, outselling their contemporaries thanks in large part to the gold-certified single “King For A Day” and their relentless world touring. Given that many of those same peers regularly release albums in half the time, the wait for the San Diego band’s fourth album has felt like an eternity to the PTV faithful. But given the four years-plus waits for new studio albums from Metallica, Radiohead and Depeche Mode, PTV are certainly in good company when they, as Dr. Dre once put it, “take [their] time to perfect a beat.” Vic Fuentes (vocals/guitar), Tony Perry (guitar), Jaime Preciado (bass) and Mike Fuentes (drums) realize it’s good to be so wanted and with the new album finally on the schedule, they’ve proven they’ve “still got love for the streets.” AP caught up with the band’s frontman about the long journey to Pierce The Veil’s Misadventures.

Our new Pierce The Veil Issue is available now!

Where did you first start writing Misadventures?

VIC FUENTES: I rented a house in South Park in San Diego; some of the main riffs for “Sambuka” and “Song For Isabelle” [were written] in the living room. I wrote this jazzy riff for “Bedless” there. The first time my mom heard it, she said, “That’s a hit!” [Laughs.]. After that, I got a cabin in Big Bear [Mountain, California]. I lived up there for one or two months. It was fun. But I would spend five or six days there and then kind of freak out [because] I wasn’t living around anybody and come home. Or I would have my best friend, Curtis Peoples, come up and write with me. We wrote the music and some vocal melodies for “Today I Saw The Whole World” there. Afterward, we watched Aladdin on VHS, because it was the only movie in the cabin. It still holds up! I wrote the main riff for “The Divine Zero” [in the cabin]. I remember walking around the kitchen feeling very happy with the heavy bridge riff.

You finished that song with the drummer of Third Eye Blind, Brad Hargreaves.

It was one of the biggest highlights of the album for me! I used this riff as a jumping-off point to write the song with Curtis and Brad  from Third Eye Blind. It was a surreal experience. Curtis and I went over to Brad’s house and wrote the music and structure for “The Divine Zero” with him. After that, Curtis and I wrote with our friend Steven Miller, at the LA studio owned by David Hodges, who used to be in Evanescence. The structure, music and most of the melodies to “Circles” were written there and never changed. We scrapped two songs during preproduction and wrote “Sambuka” and “Song For Isabelle” in the studio, based around riffs I really loved but never used. They came in handy just when we needed them.

How many lyrics did you have when you went into the studio?

I don't think I had any lyrics written when we went in. I thought to myself, “Hey, just dive in and we'll just do it all there.” We just ended up spending so much time working on the music itself, it was so hard to throw words into the songs out of nowhere when everyone was like, “Okay, it’s your turn, go!” I tried [writing in the studio]. I did finish some songs, but they didn’t feel right to me. They didn’t have enough meaning. They had really pretty words people would have probably been able to appreciate, but I didn’t feel anything from them. So I actually went back to the ones I didn’t feel right about and redid them.

After two months in Long Island, the other guys returned home.

I stayed and finished a lot of guitars. Dan [Korneff, producer] and I did a lot of work to get a lot of unique tones. That part is the most fun for me: things no one would really care about, but we have a great time doing. No one is going to know the little things that we did, but overall, it'll be a feeling you get when you listen to the album, it just sounds different than the other albums. I think that's what is going to set it apart.

Why did you decide to stop working and go back on tour?

I was there for another few months and I just didn’t feel right. I was trying to keep my relationship with my girlfriend; thank God for FaceTime! She was probably the only one that actually knew what I was going through trying to make it. I think that's when it got to a point where we were like, “Alright, get him out of there. We're sending him home and we're going to go on tour and we're going to break this up instead.” We probably should have made the call way earlier. I needed a breather. I needed some air. It had to be done. Between the rentals, the cabin and the studio, it was too much isolation. There was no other choice than to see the band, see my friends, see the fans and play some shows. That was a lifesaver, for sure. I’ve heard some bands actually plan it that way: they’ll take a break to play some shows during the middle of recording, either to try the new songs, or just remind themselves why they do what they do and ground themselves as a band again. It was good for us. We did the World Tour with Sleeping With Sirens. We ended up cutting that tour short to get back to making the record, but it was one of the best tours we’ve ever done; super-fun, super-successful, a really great time.

Were you able to write any lyrics on The World Tour?

I wrote some for “Phantom Power And Ludicrous Speed.” I have trouble writing on tour because of the lack of time and privacy.

Where was the next writing destination after the tour?

I rented an Airbnb in Santa Barbara, California for a month. It was this modern rustic little house. It was the kind of place meant to walk around naked in. There’s a lot of privacy but the house itself had all glass doors and the shower door opened up into the yard. You can take a bath outside in the yard. I wrote the lyrics for “The Divine Zero” there.

I drove home to our studio at my parents’ house and recorded the vocals using the custom pre-amp/compressor Dan had built for me. We felt pretty good about that song. We really needed to have that song for Warped Tour. That song was far along enough to where we could finish, it was reachable. I'm really glad we got it out. I think that was an important, but small step. I continued to write lyrics throughout Warped. I began writing the lyrics for “Floral & Fading.” [After Warped Tour], I worked at a lockout practice space in Burbank but I had a lot of trouble writing there, because of the noise from other musicians in the neighboring rooms. I finished the lyrics to “Bedless” in Marina Del Rey, pacing around an Airbnb one night at like 3 a.m.

Concord Music’s acquisition of Fearless gave you the opportunity to work at one of LA’s most historic studios.

Concord has a small room [at The Village studio] that they permanently own. Everyday there were really well-known artists coming in. Stevie Nicks stopped by to do some vocals for something. Busta Rhymes, Ben Harper, Ziggy Marley, the Griswolds; when Snoop Dogg was there, they had to get fans and air out the whole building for, like, a day. [Laughs.] The staff was so cool and supportive. I got a lot of stuff done there. At some point they had somebody else [booked for my spot].

I had a few more songs to finish and Curt was like, “You love Seattle. You’ve always talked about writing there, why don't you go up there for a week?” I got a room at [Hotel Max]. They had pictures of Nirvana and Pearl Jam on the doors and stuff. One of the floors was dedicated to Sub Pop Records. It was rad. It was like the perfect vibe for me to stay in. I spent about a week or so up there and that's where I finished the last of the record and ended up flying through three songs that were really giving me trouble for a while. That's where I found the last bit of inspiration that I needed to finish it up.

As soon as I got back from that, everything flew into gear. Flew back to Long Island, recorded all the vocals and then we mixed. There’s something from every place on the record. Whether it's a guitar or a vocal or a sample, or a keyboard part. The more we do records the more I naturally get better at doing my own production. The more that I realize that if something sounds cool then it's going to go on the record. It doesn't have to be done in a million-dollar studio.

What would you like to say to your fans that have so eagerly anticipated the release of Misadventures around the world?

We're thankful to have fans who are relentless and who are always there for us as we do our thing. They give us the opportunity to do this and to have that opportunity to make the music exactly how we want it and to be there for us along the way. It’s super-important for us. I think that's what keeps us on track, knowing that when we're finished with [the album], we're going to come out and play these shows and see everybody again. They definitely help with that. ALT