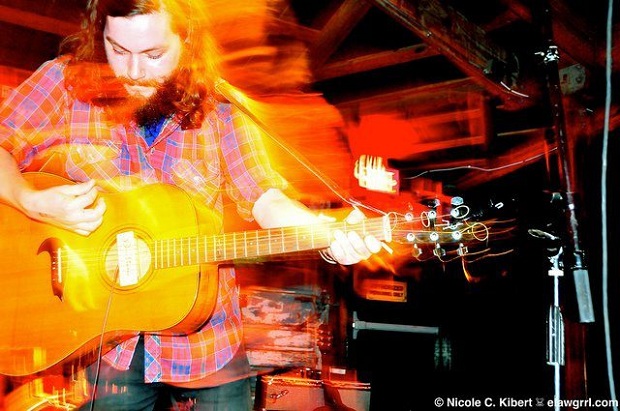 Check out this premiere of PJ Bond's new video for “Nevermind.” Over the past three weeks, we've premiered videos and songs from PJ, as well as published his thoughts and lyrics for each. “Nevermind” is the third and final installment. The first and second pieces—”I'm In A Bad Way” and “Reasons”—can be seen here and here, respectively.

“Nevermind”
You know, when I started this off, I thought it was over. My future was uncertain, but I guess that's how it always is. I hoped that I could make it alone, I knew that I would have to be reborn. I'm breaking rusty old chains and habits, forming new ones. My family got scattered about, so I went to find them. I made new friends in the north and the east along the way.  So if you are with me tonight, I hope that you'll be with me until we die. If not, I've fucked up, so nevermind. I want to give it all, i want to give it all, at least a little bit. Maybe we can have it all, we can have it, but what if it's not enough? So, now we have to question, have to face the facts, always have to question, “are you going to crack?”  I hope you know the answer you can't take it back, or they won't like it, they won't like your style. I slipped my way across the great icy west and I slid by. I watched as the snow blew across my face, and it spun me wild. I thought that I could make it alone, I hoped that I would stay alive until the coast. I wish someone looked after me but they nevermind.

“Nevermind” was a song that didn't quite make sense with the majority of the other tunes I'd been working on, and that became even more obvious when my friends and I recorded it. This version of the song is a bit more “rock” than some of my other music, which I really like about it, but I couldn't figure out how to bridge the gap when trying to include it on a “proper” record. So, the obvious choice was to not force it and just release it as its own thing. For a while I'd wanted to compile a bunch of tour videos I'd captured, but wasn't sure how I wanted to go about it. Between batteries dying, forgetting the camera in the car, laziness and a whole host of other things, I had large chunks of great stuff that were perhaps a bit disjunct, due to missing footage. This video was a good way to put this song and all these snippets together.

Bond is currently on an extensive European tour. Check out the remaining dates below.