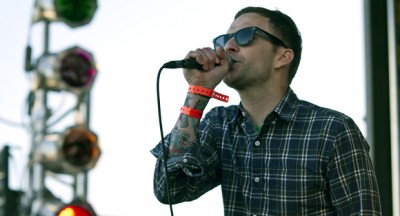 “That’s where my heart is, and what every bone in my body is telling me: ‘Do this last Movielife show.’” — Vinnie Caruana makes his intentions clear.

August 26, 2011. Mark the date, punk-rock historians, because that’s the night Long Island, New York, pop-punk legends THE MOVIELIFE will perform their last show. Although the unit reconvened this past May at the Bamboozle in front of an incredibly passionate crowd, the band will cease to exist following their one-night stand at NYC’s Best Buy Theater. Lead singer VINNIE CARUANA talked with Jason Pettigrew about readying the new record from his band I Am The Avalanche, managing the expectations of the fan-artist relationship—and how making a clean break with the past is the only way to let the future do its thing.

Let’s talk about right now: What’s the status of I Am The Avalanche?
The status of I Am The Avalanche is I’m finishing tracking my vocals tonight. The record will be completely done being tracked [and then we’ll] do gang vocals, which is party night. Everyone drinks lots of beer and yells into a microphone together. Gang vocals are definitely the most fun part of recording.

Who’s helping you crack open a few?
It always happens last minute: “Oh shit, we need a gang if we’re going to have gang vocals.” We’re going to have all the guys in the band, some close friends. I’m actually waiting to see who’s coming. We’ll probably have some of our friends from Brooklyn. We’re trying to get a few girls in the mix. I think that always adds a nice touch to gang vocals, just so it doesn’t end up sounding like a Hatebreed-type gang vocal. I’ll share that production tip with bands who can’t quite seem to get their gang vocals sounding right. But we get done, we send it out to mix and then we start to set up our record.

Are you putting it out yourselves?
No, we’re going to have a new label putting it out and that hasn’t been announced yet either, because that ink is not dry. It’s a little tough right now for specifics for you, because we haven’t signed it yet. It’s going to be coming out on a new label, and then we are going out on tour in October and November in the U.S.

Avalanche did four shows after the Movielife played Bamboozle this past spring. What was the response to that? Did the Bamboozle appearance do anything to affect what you’re doing in I Am The Avalanche, in terms of perception?
Well, it’s funny: I Am The Avalanche have become a lot more popular since we went away for a bit. It kind of makes sense, actually. I saw it happen with Hot Water Music, I saw it happen with Lifetime, I saw it happen with the Movielife, you know? We’re really lucky there’s still a fire and that people really care. We’re lucky because we put out a record so long ago [2005’s I Am The Avalanche] and people are still interested and excited. We had our first sold-out show this year. It’s very strange: We played at Webster Hall in New York City and [the promoters] were like, “Yeah, it’s sold out.” We were like, “Wait, has that ever happened?” People are behind us, for sure.

Describe the new Avalanche record.
It’s super-energetic, really aggressive, very urgent and very anthemic. We’ve been looking at the sequencing and trying to put all the songs in the correct order—it’s pretty relentless. If it’s not amazing and incredible, a 10-out-of-10 kind of record, we didn’t achieve our goal. We just feel like that’s what’s owed to the people that care about our band. It needs to be perfect in our eyes.

In this scene, the people that support these bands get what they want. They see a band four or five times a year if they want to, because that’s what bands do: They just go out and they tour and they go nuts. The reality for I Am The Avalanche [was] different. We were in a little bit of a spot where we couldn’t quite release a record yet. We were living in New York City: It’s very expensive, we all needed to get back to work. It wasn’t really a hiatus because we continued to play shows—but unless you lived in the Northeast or [near] the odd show that we would show up playing, we were kind of on a hiatus to a lot of the people that weren’t seeing us.  Once we’re standing in front of you, then you feel like, “Okay, they’re here. They’re alive.” I think it’s a thing where you get taken for granted and then once you’re gone people… It’s like when you fall in love, when you realize how much you love that girl that you took for granted and she bounces and she’s out of your life. Then you spend the next year of your life with the shades drawn, wearing a cape and scribbling poems about how you love her with charcoal on the walls, you know what I mean? [Laughs.]

Sometimes you’re just forgotten, but there’s something about I Am The Avalanche that stays with people, and I’m glad, because they’re about to be rewarded. “Why aren’t you coming here?” that’s always the question. “Why aren’t you guys here? Why haven’t you come here? Why haven’t you toured?” [Fans] have to understand that we can’t just go out there out of nowhere, after years of touring, without having a new record.

Why did it take so long to jumpstart Avalanche in the first place?
Basically, I Am The Avalanche pretty much found ourselves in a state of hibernation and a little bit of complacency, being home, working, being around our families and friends and writing a record slowly. Touring became a thing where we just kind of knew that until we were ready and until we recorded a record, until we had someone to release it we really just need to stick to the home life. That’s what we’re doing now.

Were the members feeling a little too casual about the band?
No, I mean everyone is still hungry as they’ve ever been to do this. We recorded this entire record and produced it on our own. Well, that’s not true: Our drummer, the Ratt [aka Brett Romnes]—who is an extraordinary producer and engineer—has been handling this entire record. And you know, making this record, we announced, “Oh yeah, we’re going to drums.” And then kids are like, “Oh, cool. So, when’s the record going to be out, in a few weeks?” And it’s like, “No, no. We’re doing drums this month; we’re doing guitars next month.”

I think a lot of music fans think the process of making a record happens overnight.
Every record I’ve ever made, you go for a month and you make the record. That’s all you do for like 16, 17 hours a day. You wake up, you do it again and within a month, you’re done. That’s not the way we did this record. We started this record like four or five months ago, slowly recording it because we all have jobs, lives and responsibilities. We made this at our own pace: You can’t live in New York City, go somewhere else for a month and take off work because you’re going to have to find a new place to live. It’s very hard to survive here, but this is where we live. So the way it worked for us was we would write, we would practice when we could and we would play shows when we could. You know, as a band it becomes really hard when what you’re doing starts getting dictated by what people want you to do. But everything’s going to go really fast now, trust me. As soon as this mix is done and the record is delivered, that’s when I’m going to kick back and sit on the beach for a month. Because I know I’m not going to get the chance to do that for a while.