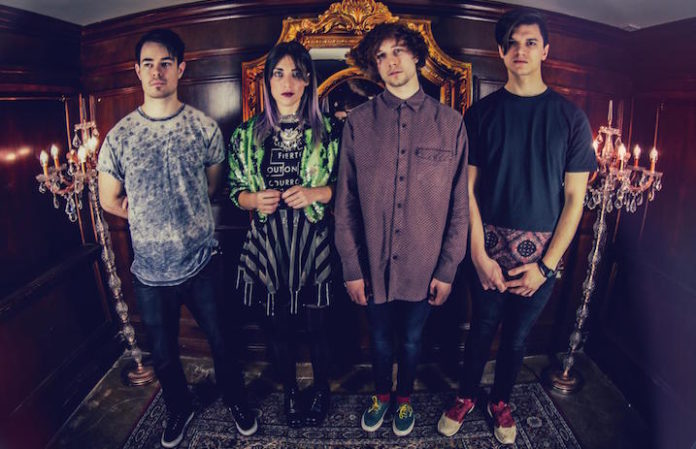 Earlier this year, colorful Scottish pop-punkers Vukovi decided to put a spotlight on victimization and the cultural impact of bullying, in particular cyberbullying, with one of their music videos, “Weirdo.”

With the constant increase of smartphone applications, most of us have access to a never-ending list of communication channels, which means that cyberbullies can target their victims at any time, from anywhere in the world, often anonymously. You’ve probably heard the term “troll” before, a general term for a cyberbully. Law enforcement across the globe are doing as much as they can to make cyberbullying a hate crime and prosecute the perpetrators, but there’s a lot of work to be done, given the volume of abuse that is dispensed thoughtlessly with one brutal click around the clock.

We met up with Vukovi frontwoman Janine Shilstone at Reading Festival in the U.K. this past weekend to understand her experience of bullying and to get her take on the band’s intentions with the music video.

“I got bullied at school,” Shilstone says. “We had MSN Messenger back then. I was getting brought into a lot of MSN chat groups, and you wouldn’t have a choice to join or not. At the time, you couldn’t say “yes” or “no,” so I’d get groups named after me, really horrible things. Nowadays, you’re so accessible to people, and it’s easy to get away with it, especially with Snapchat. I was into music and doing creative things, so that passion overrode the grief I was getting.

“When I left school, I came I into my own, because you go on to further education, you do things that you want to do, you meet like-minded people—people who are actually on your level—and then you think, ‘Do you know what? I’m actually quite cool!’”

The vocalist explains that the girls who star in the “Weirdo” video are around 14 and 15 years old  and some have even been hospitalized because of severe bullying and/or cyberbullying. They have been victims of it at an extreme level.

“I went to school with this girl, and I met her younger sister Brogan and her mum at a Bring Me The Horizon show,” Shilstone says, “and her mum told me everything that was going on for Brogan, and it was horrific. So that sparked the concept for the ‘Weirdo’ music video because, when I saw her, she was a shell of herself. I know how hard it must have been for her to do the video, and afterward, she went to the hairdresser’s and got all of her hair chopped off. She wants to experiment with her style, and she likes the androgynous look. She marched into school and was like, ‘Fuck you, I don’t care.’ Seeing that confidence!”

Although Shilstone has managed to survive years of bullying, she tells us that the band are regularly targeted by trolls though social media and has this advice for any young people experiencing what she went through:

“At school, you’ve got to look at the bigger picture: If you have a passion for whatever you’re doing, it will beat any asshole online. I know everyone says ‘ignore it,’ but these bullies must have really pathetic, sad lives. They must have it pretty shit if they need to feed off of that. Put your head down at school, get your grades, and then you can fuck off and do whatever you want to do. These clowns, they’re probably never going to leave the town that they were brought up in.

“Keep doing what you’re doing, and if all else fails tell them: ‘Suck my dick!’”

For resources and more information on bullying and cyberbullying, you can visit Bullying.co.uk, Childline.org and InternetMatters.org.