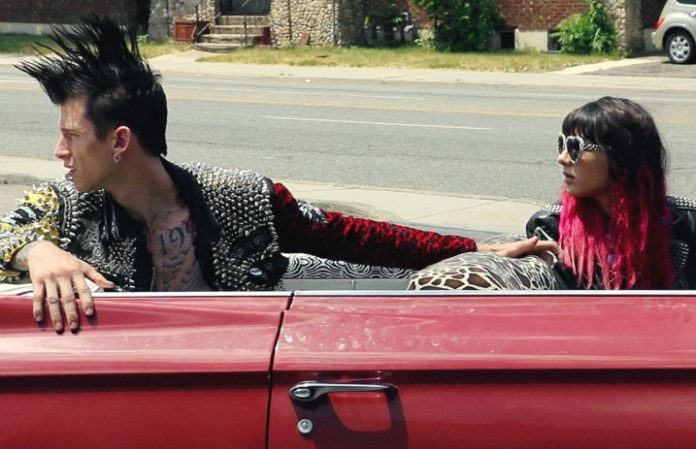 If you find yourself needing to explain what type of punk someone is, let this scene from Punk’s Dead: SLC Punk 2 serve as your guide.

Check it out and see what other original characters you can spot.

Merendino says the first punk movie he remembers seeing was a documentary called The Decline of Western Civilization. “It showed me a world that I had no idea existed, but that I completely related to as an outsider in Salt Lake City,” he shares. “I was so intrigued by [Germs singer] Darby Crash who was so completely over the top—unable to remember his lyrics, smashing beer bottles over his head—and so soft spoken during interviews.”

Merendino says SLC Punk! is an unusual movie because it is about punk fans—not musicians or bands—so many will be able to identify with the characters.

“The movies are for anybody who has ever felt like an outsider or ever got their heart broken,” he shares. “Punk's Dead has a strong nostalgic theme and is, in a way, helping the audience grieve Bob, who died in SLC Punk!, and what punk rock used to be in the early days.”

The sequel will be available for early download Feb. 16 and on home video March 8 from Cinedigm.

Punk’s Dead: SLC Punk 2 will be available exclusively Feb. 11-15 via Tugg screenings in theaters across the country.

We asked Merendino to share some of his favorite punk films, and here’s what he came up with. Tell us your favorite punk movies in the comments below!

“It's an awesome movie, it doesn't make any sense, totally absurd, has aliens. Emilio Estevez is playing a punk rocker named Otto who becomes a repo man and it's just completely crazy. It's anarchy and chaos and ALIENS!!!”

“It’s a very authentic movie about street punks with a great live performance from T.S.O.L. I can relate to the guy who leaves his suburban home to join a bunch of street punks.”

We Are The Best!

“These three punk rock girls are just amazing. As soon as I started watching it, I was hooked. It’s a Swedish movie, and if you have not watched it, you should.”

“This movie is so hardcore and chaotic. It's like it's really happening.  The film quality is cheap, yet the filmmaking is genius. And there are absolutely no rules. Which makes it extra terrifying.”