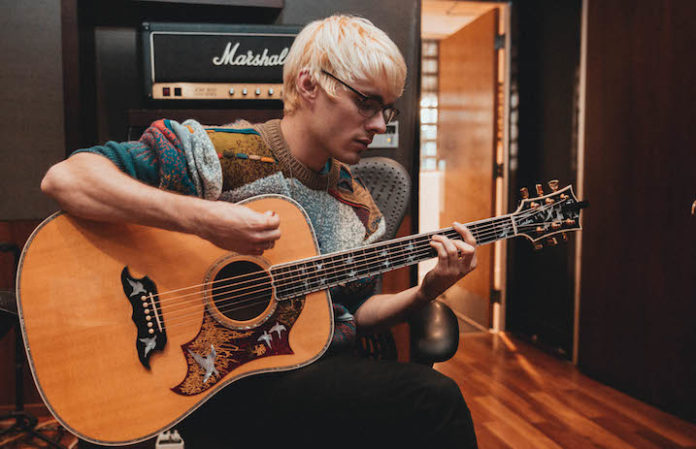 Awsten Knight, despite the front he presents on Twitter, is not a raging egomaniac. So the lead singer of Waterparks chooses his words carefully as he stands in a parking lot in “the middle of nowhere,” England. “In the least cocky way possible, I know I’m good at music, otherwise I wouldn’t be doing it for a living,” he says when asked about expectations for his band’s new album. Despite their debut full-length Double Dare coming out less than a year ago, the Texas three-piece, rounded out by guitarist Geoff Wigington and drummer Otto Wood, recently finished recording their next chapter to the pop-rock universe. Even though Knight is eager to describe the process as “easy and relaxed,” we dove deeper into the Gloom Boys’ latest effort.

Read more: Waterparks announce headlining massive tour with As It Is, Chapel and Sleep On It

What was your biggest goal on the new album?
AWSTEN KNIGHT: I never, ever, wanted to make the same thing twice. I’ve showed friends demos and everyone’s like, “This is such a next step.” There’s a very clear growth.

You’ve said before that you’re a chronic over-writer, writing more than 40 songs for Double Dare. Was that true with this album, as well?
Yeah—not as many because we’ve been touring for almost two years straight. More than half of Double Dare was written before we did the first tour, before [our first EP] Cluster came out. Every release so far has been written in my bedroom in Texas.

Do you write on the road?
I’m always doing voice memos, I always have a guitar with me. Yesterday I think I wrote two songs with lyrics. I just don’t consider a song written until it’s demoed. If we’re talking about just “being written,” then yeah, hundreds and hundreds of songs were written for this. But this time around, I think 22 of them got demoed.

How do you pare it down then?
This one hurt. There are certain friends I show all of my completed stuff to, and when I showed them the final tracklisting, everyone was like, “Fuck, seriously?! What about this [song]?” It was funny because out of maybe the 10 people I show everything to, they all were equally upset but about different songs. [Laughs.] We did this album with Courtney [Ballard, producer] and Benji [Madden, Good Charlotte] again—just like Double Dare, just like Cluster. It works so well, and it’s so easy, that I don’t feel the need to mix it up. It feels like a winning combination.

So working with them now on three full projects, what is your favorite aspect of working together?
They let me do what I want! It’s a serious thing: Before, when they didn’t know much about us, we had some co-writing sessions lined up—which is something everyone does, I had no idea—but when they heard [our demos] they were like, “Yo, if you don’t want to do the sessions, you don’t have to,” and I was like, “Thank God!” [Laughs.] With this album: no co-writes. It was easy, I brought everything from my room and was like, “Here are the songs.” We went through, polished them up, made minor changes, and, again, they just believe that what we’re doing is sick. Benji has told me before, “If the songs aren’t there, I’m not going to lie to you.” He’ll be like, “Yo, let’s sit down and try to work out some other stuff.” But he says that has yet to happen, so just keep doing it. [Laughs.]

The only way it was hard—and this is gonna sound so lame—but there are certain songs about shit that I don’t like, or difficult times or things to deal with, and digging back at those. You have to put yourself in that spot again or it’s not going to be a genuine performance. So on days where songs like that were done, even though I’ve moved past a lot of the events, it’s still a weird mood. It took a while to snap out of it.

Is it hard to go back to some of those old feelings and relationships?
What’s fun is there are no songs about other relationships, other than the one I’m currently in. In the beginning, [the relationship] had a lot of weird points, so a lot of things were written at that time. There’s one song where we actually kept all of the demo vocals in it—the ones I did in my room. I wrote them and did them that day, and it was literally one of the shittiest days I’ve ever had. The thing that’s going to be heard is exactly what was being felt at that time; it makes it feel really genuine.

How did you balance all of the excitement and expectations built up after Double Dare?
I don’t like showing a lot of people things. I waited until the last minute to show the label demos, stuff like that. I don’t like having people watch what I do. When we were recording the album, I had to stop looking at Twitter—after a while, expectations do build up. I don’t think that’s a good thing for an artistic process. If there’s a lot of pressure on you, you wanna be like, “Oh, we needs hits and hits and hits!” When, if you just chill and do what you’re good at, it’ll happen.