If there’s one thing you can’t accuse George Watsky of, it’s not being honest. Since gaining momentum back in 2012 after his “Pale Kid Raps Fast” video went viral, he’s been littering elements of his life, laying them bare for all to see. Whether it’s those fast raps that first gained him notoriety or the essays detailing his inner workings, it’s all tied together as a pure representation of Watsky.

For his fifth full-length outing, COMPLAINT, Watsky delved into part of his life which has previously served as a background character, appearing occasionally, if at all, across his past releases. “It was hard to write in a way,” he begins, recounting what went into the album.

“It was me trying to share more of myself,” he says. “I haven’t written a lot of love songs over the years. I’ve had a few; I’ve had ‘Sloppy Seconds’ and ‘2013.’ Here and there I’ve written a love song, but this is a much more personal album than a lot of my previous ones.

“This one is more so saying, ‘Why am I afraid to write about certain aspects of myself?’” he confesses. “I think for years I’ve been afraid to go negative because I believe kindness is such an important quality to carry through the world. But I went to therapy this past year, and one of the themes of my therapy sessions was that every human has a light and a dark side, and that doesn’t make you a bad person.

“Diplomacy is not always nice because it’s not always honest,” Watsky continues. “And I’m trying to tap into the shadow side of myself that doesn’t necessarily make you a bad person but is just that other side of being a full person. I was writing a lot about relationship stuff with this project. I was in a really intense relationship, and it was really hard. I felt like it was important for me to share that with people.”

Giving even more weight to his newfound perspective, he says feeling bad carries its own importance.

“If you don’t feel bad, you never really understand what it’s like to feel good. If you have joy all the time, if you have positivity 100 percent of the time, it means nothing. There’s no context to it.”

It might be a first for Watsky to open himself up to both his pitfalls and those of love.  However, also marks another milestone in that it’s an album without any features.

You would think someone who’s already an open book—quite literally with a diverse list of poetry and essays—wouldn’t have an issue gaining confidence within his voice. However, it required a secluded apartment to test his vocal limits comfortably and take things to the next level.

“I could just make a ton of noise!” he exclaims, remembering the process. “In the past, when I’ve lived in places where people could hear me, and I could hear them, I would get self-conscious about practicing and singing badly, and singing badly loudly, like screaming—I would shriek a little bit.

“If you’re a vocalist and you’re not able to throw yourself completely into the thing you’re singing, you’re censoring yourself emotionally a little bit; it’s hard for you to get a good performance and emote fully. So it was cool to live in a place where I didn’t have the anxiety of ‘Oh I’m bothering the person upstairs,’ or ‘They’re hearing me sing like a dying cat right now’—I just didn’t give a fuck! It allowed me to lean into things and to perform a little bit harder, and put some more emotion behind it and learn how to manipulate my voice that way.”

Cementing these two elements—personal development and romantic shortcomings—leaves COMPLAINT as another stepping stone for both Watsky and his fans in trying to understand the man himself and the world he resides within.

In totality, COMPLAINT might seem like Watsky reaching a point in his life where looking back is as much of a necessity as looking forward—and with the development of his literal voice, setting himself up for an even stronger future. But fear not: This doesn’t mean he’s reaching a point of peace where everything falls to being “expected.”

“I never want to find equilibrium because I want to be challenging myself and making my music different constantly,” he explains. “It’s an artist’s job to experiment constantly. I feel like that’s one thing people who listen to me can expect from me. If they like something that I did in the past, they’ll probably never get it again, because I’m just going to try to change and do new stuff, because that’s what I was doing the first time I made the thing they liked.

“I don’t believe that everyone always knows what they want,” he concludes. “If I just did it again, first of all, it wouldn’t hit them the same way it did the first time, and then people would get bored with it. One of the cool things about creating the expectation about change is that I’m not handcuffed by doing the same thing because if the thing that people expect from you is variety, then it’s not a complete shock.” 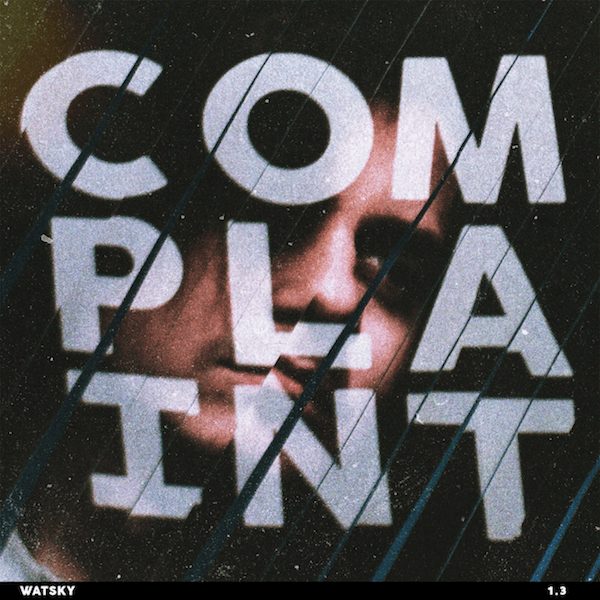 Watsky’s COMPLAINT is out today, Jan. 11, and you can check it out here. He’ll also hit the road at the end of the month with dates below and tickets and VIP packages available here.