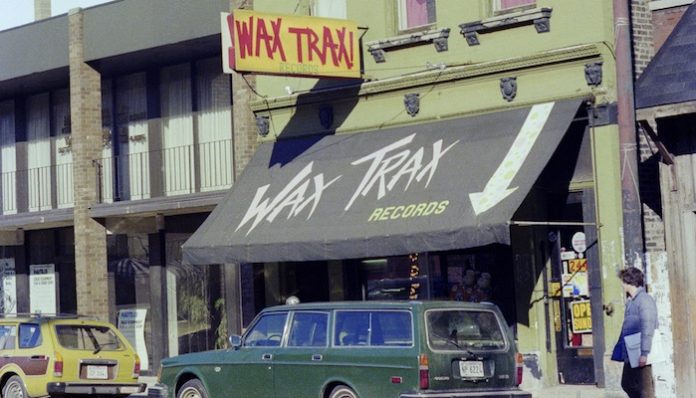 Starting with a special event on Record Store Day (April 13) at the House Of Vans in the label’s hometown of Chicago, this first of six dates combines a viewing of the documentary with live sets by electronic post-punks Cold Cave and label charter member Ministry, who will be performing songs from the group’s Wax Trax! era.

Industrial Accident chronicles the founding, rise and eventual collapse of the influential Wax Trax! label. It’s a story of two individuals—Jim Nash and Dannie Flesher—who inadvertently caught lightning in a bottle, building something so explosive, game-changing and enduring, it could never happen again in a similar fashion.

For counterculture enthusiasts of the time, both the Wax Trax! label and storefront were not only the vanguard of the emerging industrial-rock genre, but for almost any act who were too risky to be played on the radio. Nash and Flesher’s spirit of fearlessness and the bands’ desire to push boundaries helped break industrial rock and the precursors of contemporary EDM to the surface for others to discover and build upon.

There are the obvious cases, such as Nine Inch Nails (Trent Reznor cited the label’s roster as one of his major influences), the shock-rock theatrics and grim humor of Marilyn Manson and the programming-meets-metal fury of Rob Zombie and Rammstein. However, the mechanical rhythms and militaristic cadence of Grimes’ current hit “We Appreciate Power” calls back to the electronics-as-aggression ethos of WT! artists Front 242’s “Funkhadafi” and Ministry’s “The Land Of Rape And Honey.”

Likewise, practically any EDM festival or four-on-the-floor techno hack owes a creative debt to Psychic TV’s pioneering efforts in the acid house scene of the early-to-mid ’80s. Finally, the at times abstract workings of the KLF, Autechre and Underworld laid the groundwork that contemporary EDM auteurs deadmau5 and Burial would further expand upon decades later.

Prior to Ministry avatar Al Jourgensen’s storied history as a revered figure in the modern metal scene, Wax Trax! foisted him into the underground back in 1981 with the electronic post-punk single “I’m Falling.” Despite signing to Sire/Warner Bros. in 1985, Jourgensen continued to release music from his various side projects (Revolting Cocks, 1000 Homo DJs, Pailhead, PTP) on Wax Trax!

This limited-date tour will find Jourgensen and co. focusing on their late-’80s/early-’90s Wax Trax! output. Cold Cave founder Wes Eisold has frequently cited the label as an influence, and his band’s participation on this tour is a tacit acknowledgment of the electronics-based label’s continuing significance.

Industrial Accident director Julia Nash, daughter of label co-founder Jim, says the documentary had a number of purposes, such as preserving the musical and subcultural legacy her father and his partner/co-founder left behind (Nash passed away in 1995; Flesher succumbed in 2010). The discovery of a cache of label goods and memorabilia inside an unkempt Arkansas barn acted as a catalyst for the documentary. That stockpile included unsold albums and merchandise, one-off promotional pieces, label correspondence and personal effects, all stored in boxes that were neglected and unaccounted for years.

“It was the middle of summer, so it was already 100 degrees, and there were chickens and feral cats living inside the barn with just boxes and boxes of stuff,” she remembers. “It’s not the way my dad or Dannie would have wanted to leave them. They took care of everything. It was a mixed bag of emotions, for sure.”

As the film shows, both Nash and Flesher fostered an environment that encouraged its bands to take their ideas as far as they possibly could, limitations be damned. When asked to describe the Wax Trax! experience in a single sentence, longtime label associate/musician Chris Connelly summed it up as “to exist and cohabit with others as willfully unreasonable and eccentric as yourself.” Although somewhat harsh sounding, Connelly worked closely with the label as his Wax Trax! releases include three solo albums, as well as his time in the Jourgensen-led Revolting Cocks.

“I think it’s like any work situation but with a lot of unchecked eccentricities and a lot of surprises,” Connelly says. “You are still humans who have to work together toward a specific aim, and along the way toward that ‘aim,’ there will be numerous bewildering events and opinions that may either accelerate the process or bring it to a grinding halt. But everyone has a specific function, and not everyone is deluded and insane all the time, and because it’s a creative force, generally it will be steered toward the finish line at some point.”

Touching on Nash and Flesher’s passionate support for the bands on the roster, Connelly recalled what he felt was his defining moment with the label. “For me personally, it was delivering [his second solo album] Shipwreck to Jim and Dannie, and how much they loved it,” he says. “It proved how accepting they were of something that went against what the Wax Trax! audience may have expected.”

That point is worth noting. While Wax Trax! was known for its deep catalog of industrial-rock releases, the label brought genres such as electronica (replaced in modern vernacular by “EDM”) singer-songwriter fare (Connelly’s solo releases) and absurdist humor set to music (To this day, Braindead Sound Machine’s Come Down From The Hills And Make My Baby remains the musical equivalent of a Monty Python sketch gone wrong).

Julia echoed Connelly’s sentiments about promoting a sense of inclusiveness for both the artists at the label and the customers at the storefront. “I grew up in a conservative, midwestern town,” she says. “I would visit my dad at the office and the store, and you’d have a businessman in a suit going through records alongside a guy with a mohawk. It was like a mecca of weirdness, all these bizarre people together in one place, your misfits, your weirdos and your normal guys. For me, that was so comforting as I felt like I found a home.”

To this day, Julia still gets messages from strangers and distant acquaintances about how important the label and its musical output was to their own lives, whether it inspired them to create something themselves or how a 12-inch Ministry single helped get someone through a bad spot in life. “When you were so close to what was happening at the time, you aren’t aware of how this impacts others. None of us did at the time,” she says. “To this day, I am still floored by someone approaching me and saying how important the music was to them. I guess the documentary is my way of saying thank you.”

“Inclusion, community and support,” Connelly adds. “No matter how dysfunctional!”

DVDs of Industrial Accident, its soundtrack and related bundles are available through Wax Trax! Films. Information regarding the film showings around the Ministry/Cold Cave dates may be found at the Vans site.