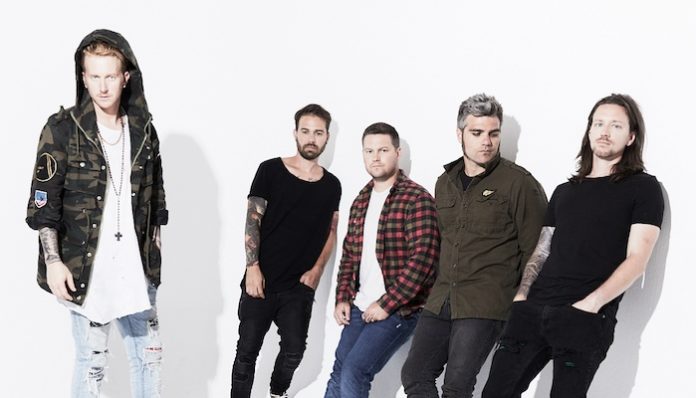 Just weeks after We The Kings dropped their pre-quarantine-reminiscent single “These Nights,” Travis Clark has reimagined the song in a new acoustic video, which you can exclusively see first on Alternative Press.

In a stunning display of his branching musical talents, Clark performs the track with a piano and acoustic guitar. The resulting “unplugged” version completely transforms the song from seemingly hopeful reflections to something much more sorrowful and raw.

Clark also participated in a cover of the Beatles’ “I Want To Hold Your Hand” this summer alongside members of Mayday Parade, the Maine, Knuckle Puck and Grayscale. However, “These Nights” marks We The Kings’ first release of 2020 and reflects Clark’s longing for touring, live shows and the “simplicity” of life before the COVID-19 pandemic. Despite the challenges, though, the vocalist recognizes a silver lining in increased opportunities for creativity. One prominent example includes the production of We The Kings’ upcoming EP, SAGA.

In an exclusive premiere of the “These Nights” unplugged video, Clark spoke to Alternative Press regarding the inspiration behind the rendition, coping with life off the road and the importance of reflection.

You released “These Nights” in September. What prompted you to follow it up with an unplugged version? Was there anything you were able to convey differently in the acoustic version that you hope fans take away after listening to it?

It’s actually started to become something that our fans look forward to hearing at some point. Now more than ever we want to release as much music as possible since we have the time and ability to do it. I think the acoustic version of “These Nights” has a more gut-wrenching take on the lyrics. Almost like the full-band version has a hopeful, “let’s get back to what we had” [vibe] and the stripped-down version gives off a “sad because everything is gone” vibe.

You’ve spoken on how the track leans into your feelings on not being able to tour. Did doing an acoustic take on it extend the meaning at all for you? How else have you been coping creatively with not being able to be on the road?

The track definitely speaks to me personally of missing the road and playing shows, but it also hits me at a deeper level outside of music. I miss the simplicity of seeing people smile and being in a restaurant or bar with a bunch of my friends and laughing about anything. It makes me feel like I really took advantage of those simpler times. There is a massive silver lining to being home, and that is [getting] the chance to see my creativity through on different projects that I start and don’t always have time to finish right away. I’ve written and recorded more music than I ever have, and I’ve also expressed my creativity through other types of art.

Read more: These are the 25 most influential songs of pop punk

A lot of artists have adapted to unique ways to create videos amid the pandemic. What went into the process and inspiration for this one? How did it all come together?

I actually hear all the time about how Brendon Urie and Patrick Stump play a thousand different instruments, and since I’m a fan and I admire them, I decided to join that group and show off a bit. Not that it’s anything crazy, but a lot of people just see me as a lead singer even though I started playing piano, guitar, bass, drums, cello and saxophone long before I ever sang a note. The track came together really easily. I just made a click track, which keeps me on time, and played the entire song through one time on each instrument and [vocals]. I wanted fans who are missing going to shows to hear what it might be like if we were able to show up to their living room and put on an unplugged concert.

How do you feel this song represents the overall sound and themes of your upcoming SAGA EP? How have the current circumstances of the world influenced your creative process and the growth of the band?

SAGA is really a widespread record, and since the album speaks to the journey of We The Kings, it actually makes sense that you can hear bits of inspiration from each of our previous six albums. I felt like that was the best way to move forward in the world. Ironically, by looking back and reflecting.

We’ve really had an amazing career as a band. We couldn’t have ever expected our lives to unfold the way that they have, and it really just makes me incredibly grateful for all the fans for connecting with us and supporting us year after year. A lot of artists forget that the fans are the biggest reason we can keep doing this. It’s nice to be able to be true to yourself and just do whatever you want, but sometimes it’s more important to listen to the fans of your music and let them motivate you.

Read more: Here are 12 pop-punk songs that align perfectly with your zodiac sign

The world’s circumstances have really halted our progress as a band. We had tours we planned on doing, videos we were filming, radio stations we were meant to visit and fans we were meant to meet. It feels like there is a giant piece missing in my life, and I can say the same for the rest of the band members. We are so passionate about what we do that when you take it away from us, it really affects us. With all that said, we are resilient as a band and will continue to find new ways to play shows, make videos, meet fans, record music and promote our name… We The Kings will live on!