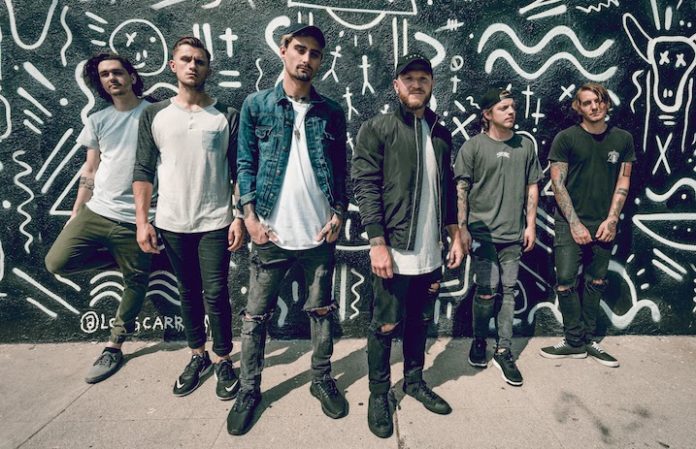 We Came As Romans’ self-titled album was not what they thought it would be. The 2015 release attempted to take the band in a more radio-rock direction, and with outside pressures from management and other industry advisors, WCAR ended up losing sight of who they really were.

And with their new record Cold Like War, they are not ashamed to admit it.

“I think on the fourth record,” says guitarist Josh Moore, “we kind of got pulled apart. I’m still proud of the work that I put in on it, and I did work as hard as I could; but at the end of the day, to me, it still just sounds like 10 songs that got thrown together instead of a complete album. There’s no cohesiveness, there’s no overall theme. I’m not 100 percent pleased with the lyrics I was able to write for it. There were a lot of things I wrote that got turned down. Overall, there was a lot of negativity in my mind associated with that record and so I’m glad we’ve moved on.”

WCAR bassist Andy Glass reflects on the self-titled record even more bluntly. “We failed on our last record,” he says. “Nothing went the way we wanted it to go. We were not in tune with what we needed to be. [So] we took a step back and endured some silence and did some soul-searching.”

“We took a step back and endured some silence and did some soul-searching.”

Their collective dissatisfaction with their last release resulted in an album that they would all come to feel is the truest reflection of WCAR. This time around, everything in the music-making process was up to them. “There’s no hiding,” bassist Glass asserts. “You can’t go anywhere. So being yourself is the only option we had. You can’t be something you’re not. People see right through.” The desire to come out with new material that’s as sincere and authentic as possible drove the band to make aggressive, yet vulnerable, songs about some of their worst moments these past couple of years. Their new single, “Foreign Fire,” is perhaps the most devastating track of all.

“You can’t be something you’re not. People see right through.”

“[“Foreign Fire”] is actually my favorite track,” Moore remarks. “It’s probably the most connected I’ve felt to a song in a really, really long time. Writing the lyrics to that song was therapeutic but was really hard. The idea behind it is us being gone so much and for so long. We’ve been doing the band for 12 years now. There’s a lot that we miss out on at home with our family, with our friends, with our girlfriends… Frankly, it sucks. It’s not one of the more rewarding things you get for being in a band. Sometimes I feel like at the end of the day we’re the story of the ones that our family loves. I’m the story of my mom’s son or the story of ‘Uncle Josh,’ but I’m not actually there to make those memories anymore because I’m out doing this.”

The song specifically refers to a series of deaths that the band members suffered through. Moore lost his grandfather at the start of WCAR’s first tour of southeast Asia. Glass lost several family members and friends, and vocalist Dave Stephens’ cousin committed suicide. Because of their extensive touring, they weren’t able to make it home for funerals or family gatherings. “That was pretty devastating, to be honest,” says Stephens. “Doing what we do requires a lot of sacrifice. You lose relationships over it. You miss things like weddings, funerals, birthday parties, holidays… For me, it was one of the saddest moments in my career.”

Coming off a subpar record and having to deal with the cruel realities of life almost destroyed the band. “It was really scary, to be honest,” Stephens admits. “We were kind of having an identity crisis. We didn’t know what we were supposed to sound like, what direction we were supposed to go, or if people even really cared anymore. Going into [the new record], we had this mindset [of] do or die. Our backs were kind of against the wall, and we had to make the best record of our career.” Glass adds, “We were all terrified. It’s like the feeling of being terrified to be yourself, which should never be an issue.” But despite all of the insecurities and doubts, WCAR pulled through and worked harder than ever on Cold Like War.

“We were all terrified. It’s like the feeling of being terrified to be yourself, which should never be an issue.”

And while “Foreign Fire” and many other songs on the record deal with heavy subjects, it’s not all tears. “We really wanted to acknowledge that there is this negativity that exists and just be forthright and very forward about it,” Moore says. “But at the same time, it would be a disservice to not acknowledge all the good that is pulling us through as well.”

After the grueling 11-month task of making the new record, the band have finally arrived at a sense of positivity and togetherness. “I’ve never seen my band so happy on the road,” Stephens says of their current tour with I Prevail, Escape The Fate and the Word Alive. “It almost has re-sparked the band. There’s a new kind of passion, almost a youthfulness to everything we’re doing. Everything feels exciting. We find ourselves just enjoying the moment more.” Given the record’s theme of struggle and learning from past mistakes, it is clear the band are fully aware that pure happiness doesn’t always last. Rather, it’s about striking a balance. But right now, WCAR couldn’t be more proud of this new single and their fifth full-length.

Cold Like War releases Oct. 20; you can pre-order here. Check out the tour dates below: