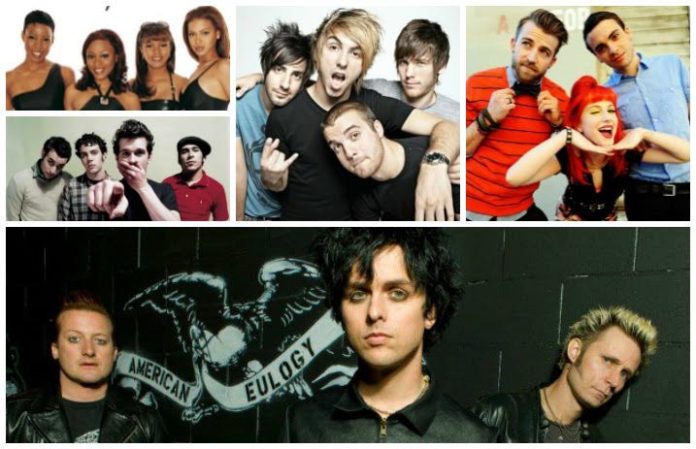 Around the AP office, it would be a supreme understatement to say our tastes “vary.” From the heaviest metal to the poppiest superstars, we all would love to design some strange tours—cue a million promoters’ nightmares. We asked members of our staff to put together their in-a-perfect-world concerts and got some pretty bizarre answers…

THE IT MAKES SENSE IF YOU THINK ABOUT IT ENOUGH TOUR

Co-headliners:  Brand New and Paramore
Support: Knuckle Puck, Tiny Moving Parts, A Lot Like Birds
A Lot Like Birds, Tiny Moving Parts and Knuckle Puck would be on the stage at the same time playing songs back and forth, battle style. Then Brand New would play every song they have ever written, in order. Paramore would do the same. (This is a very long event.) It would involve a lot of crying and the holding of each other. #emoforlyfe —Amber Funk, Merchandise Manager

THE EVERY DAY IS HALLOWEEN TOUR

Headliner: Slipknot
Support: Marilyn Manson, Ghost, Gwar, In This Moment, New Years Day
I think we can all agree that one day of Halloween is simply not enough. In the spirit of Halloween, I'd like to think all the bands would take their imagery to a whole new level, competing amongst each other for who can be the most over the top. A true spectacle for the eyes and ears. —Stevie James, APTV Correspondent

Headliner: Destiny’s Child
Support: Aaliyah, Tinashe
Opens with Aaliyah singing an acoustic, slow version of “More Than A Woman”—cuts to a montage video of Destiny’s Child video mash ups with the three queens coming up from the stage. Highlight: All the ladies joining together in a phenomenally choreographed rendition of Beyonce’s “Run The World (Girls).” —Joe Scarpelli, General Manager

THE THIS MUST BE MY DREAM TOUR

Headliner: The 1975
Support: PVRIS, Bad Suns, LANY
The show would be an alt-rock dream team. The 1975 would play their self-titled album in full, closing every night with “Heart Out” because it’s such a banger. Plus, Lynn Gunn would join them to perform “Robbers,” because a Matty Healy/Lynn Gunn duet would be everything I never knew I needed (until now). Let's just say, I love this lineup so bad. —Maggie Dickman, News Writer

THE NO BACKTRACKS, NO BULLSHIT TOUR

Headliner: Brand New
Support: Alexisonfire, Thrice, Balance And Composure
The bands are slated to play the most dynamic songs in their respective arsenals, from whisper quiet to raging guitar-driven rock. The most fun part about this tour is it would be played in venues under 300 capacity, bringing out the dynamic range of all these bands. After the bands finish, Daft Punk will remix London Calling as it plays live. Then I die in a corner, happy and full of PBR. —Nick Wagner, Office Manager

THE STILL IN TRANSIT TOUR

Headliner: Green Day
Support: Sum 41, NOFX
All three of these bands are dropping albums on Oct. 7. Did Christmas come early? Punk rock and political and social awareness. What more could you ask for? —Rabab Al-Sharif, Digital Content Editor

THE SO WRONG, IT'S STILL WRONG TOUR

Headliner: All Time Low
Support: Waterparks, With Confidence
For the first half of their set, All Time Low play So Wrong, It's Right in its entirety. Then, both openers join the band onstage for “Dear Maria, Count Me In.” Current and past me would crumble into dust and blow away on the wind. —Mackenzie Hall, Managing Editor

THE SO HIP, YOU’LL HOP TOUR

Headliners: The Dillinger Escape Plan, Head Wound City
Support: Old Wounds, Prurient
Prurient’s Dominick Fernow plays an hour-long noise set by repeatedly smashing an amplified platinum serving tray into the hooded faces of people who organize for Citizens United. Dillinger Escape Plan guitarist Ben Weinman stands on top of an amp stack holding a new custom guitar that releases a bayonet at the top of the headstock. He swan dives into the crowd and things get interesting. —Jason Pettigrew, Editor In Chief