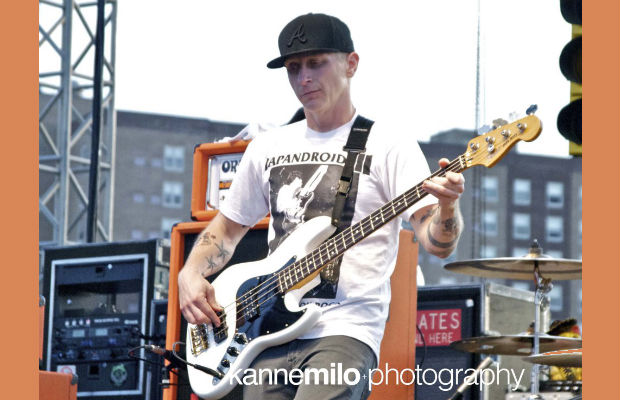 In late 2005, beard punks the world over mourned the end of Hot Water Music, the long-running post-hardcore band who were hugely influential yet never broke through commercially. But just as quickly as HWM dissolved, THE DRAFT—featuring every member of Hot Water Music minus vocalist/guitarist Chuck Ragan, who was replaced by Todd Rockhill—came together, immediately jumping back into the game with extensive touring and recording. Maybe too immediately: The band released a killer full-length, In A Million Pieces, as well as a handful of 7-inches, but quickly disappeared in late 2007—just in time for Hot Water Music to announce their reunion. HWM made a triumphant return to a punk scene desperately missing them, playing the biggest venues and selling the most records of their career. Of course, now Hot Water Music are taking a short break this summer, which means the Draft are being dusted off for a quick tour, which kicked off July 17 in Washington, D.C., and running through July 28 in St. Louis (plus an appearance at the Fest in October.) Confused yet? So are we, so we turned to JASON BLACK, bassist for both bands, to set us straight.

Was there any discussion in the past couple of years about reviving the Draft for a show or two?
Not really, honestly. It wasn’t anything any of us had really considered. Phil [Battiato, booking agent] had brought it up at some point and the email sat in my inbox forever and ever. When we got back from our last Hot Water [Music] tour, we figured out that we would have a lot of time off. I was just like, “Do you guys want me to see what this is all about?” Everyone was just like, “Why not? Lets do something short together and see if it looks like it’s worth checking out.” It’s a very informal situation.

Given the fact it’s that kind of relaxed way of coming about, are there expectations that you have for this upcoming tour? Are there goals?
I’m just going to sit back and let it happen. I mean, hopefully it goes well, obviously. Nobody likes playing shows that aren’t awesome in one way or another. Whether it’s a ton of people or a lot of excited people, I think for us, everyone has put a very small amount of pressure on it. It’s not like things went amazingly well when we toured when the record was new. Now, it’s like six years old I don’t know if it’s going to improve or not. [Laughs.]

You could easily point to the fact that Hot Water got biggerduring their hiatus. The last time I saw Hot Water headline before the hiatus was at the Grog Shop in 2004 with 200 people and then in 2008 at the Metro in Chicago, which sold out.
Yeah, totally. I mean, hopefully that vibe continues for us. It’s just a different beat. I think the tour has been booked appropriately. The venues are the right size and nothing is too crazy or too weird. I would like to think that it will be successful on the mild set of expectations that we have for the whole thing.

The Draft’s catalog is roughly about 18 songs based on all the 7-inches and whatnot?
Yeah, something like that.

Are you going to be going through song one to song 18 or cherry-picking the catalog for your sets?
I wouldn’t say we’re cherry-picking it as much as we definitely don’t want to play a couple songs, so we’re not playing those and everything else is up for being included. Just to actually play a full set, we kind of have to play everything. [Laughs.] That’s pretty much where we’re at.

What songs do you just want to avoid no matter what?
We’re not playing “Longshot” off the record, and there are a couple 7-inch songs that are not in the mix at this point but could maybe get in there by the end of the tour. Other than that, it’s pretty much everything. We don’t really have a choice. [Laughs.]

It’s crazy to think that In A Million Pieces came out literally seven years ago. It doesn’t feel like it’s that old. Now that you’ve had this second wind of Hot Water between that and the Draft coming back again, where does that Draft album sit in your mind? What are some memories you associate with that or feelings you associate with it?
I mean, it’s got the similar feelings this time around where we’re like, “Well, we have no idea what’s going on with Hot Water so I guess we’ll play some shows with the Draft.”

It’s very much like a Descendents/ALL situation where when Milo wasn’t available, the other guys got somebody else.
Yeah, kind of. We don’t really have anything planned besides this tour and that’s one thing we’ve talked about. We maybe didn’t do it correctly the first time around when [we] jumped in with both feet as far as the Draft goes. I feel like we bit off a little more than we should have with the touring cycle, the record and how involved we got. We will definitely be taking it easy this time around. I guess that aside from this tour and the shows at the Fest, it’s literally all we have planned. I don’t know; that might be all that happens, ya know? We’ve talked about whether or not we want to do more stuff, but we haven’t come to any kind of conclusion.