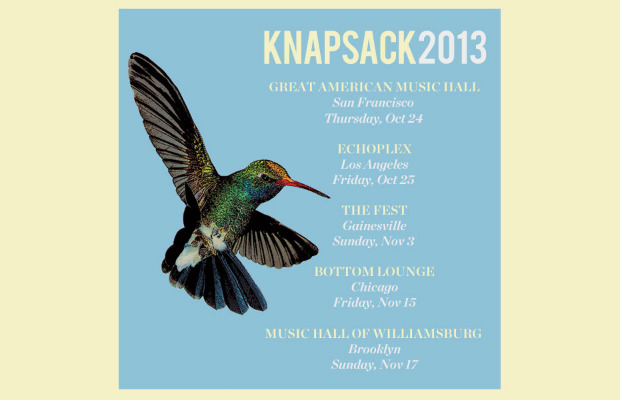 Throughout the '90s, California's Knapsack released three full-length albums and toured extensively with bands like Pavement and Jawbox. In 1999, the band played what were to be their final shows, and with each member pursuing new projects (the Jealous Sound, Samiam) after the split, it seemed the band were truly done for good. Fast forward nearly 15 years and Knapsack are heading out for a handful of shows across the U.S. While this return may not be everlasting, it will give longtime fans and post-breakup listeners the opportunity to see Knapsack one last time.

Frontman Blair Shehan and drummer Colby Mancasola, spoke with AP about the reunion.

Take us back to Knapsack in 2000. Why did the band decide to split?
COLBY MANCASOLA: We did our last full tour in the fall of ‘98. I think Blair and I had a conversation about what was going to happen after we got home from that tour. Then we scheduled three shows in January of ‘99, knowing they were the last three.
BLAIR SHEHAN: I had moved down to Los Angeles from Northern California, Colby was up in San Francisco and he had gotten a good job offer, and Sergie [Loobkoff, guitarist] had kind of signed on to play with Knapsack but he was getting split between that and Samiam. Samiam had kind of come back to life. We didn’t really have a bass player, and it just became fractured and difficult. We had just decided that if it were to continue, it would have had to have been just me at that point probably, and that’s why I started doing the Jealous Sound. It was like, okay, well if it’s just me I may as well start something new. We sort of had this agreement that I didn’t really want to keep the name and go around with a whole new group of dudes. It just reached its logical end, and that was that.

Speaking of the Jealous Sound, how is this affecting the current state of that band?
SHEHAN: We’re playing a grand total of six shows so it really doesn’t affect anything. The Jealous Sound are kind of on a hiatus right now. We did a lot of touring, put out that last record. We’ve kind of been laying low. Whether we did Knapsack or not, we’d still probably be laying low.

So this isn’t a permanent reunion? No new songs or albums?
SHEHAN: Exactly. We’re not going full-tilt boogie on it. This is just for fun. It made sense for us at this point of our lives to do it. It’s a couple of weekends, a kick in the pants, a lot of fun.

What fueled this reunion, and how long have you guys been preparing for it?
MANCASOLA: I live in San Francisco. Blair would come through town­–we grew up in the same town and have been friends since high school–so when we’d see each other over the holidays it would come up in a half-joke kind of way. Blair would tell me about some kid who told him a Knapsack story on the East Coast or whatever. After a certain amount of time, the band would come up and we’d say, “Oh what if?” or “Wouldn’t that be funny?” If we had stayed on that trajectory, we would still probably be having that conversation every time we got together for the next 20 years. Then Tom [Ackerman], who is an old friend of ours and the manager of the Jealous Sound, was the one who kind of took it on as a project, like, “I’m going to see if I can make this happen and I’m going to push you guys,” and it got far enough along to where Blair and I had to jump on the phone and say, “Are we really going to do this? Because this is progressing in a way as if we are, so let’s figure out how we’d like to do it if we did it.” We structured it in a way where it doesn’t affect the Jealous Sound and no one’s quitting their job. It was all about getting to hang out as friends and trying to keep it super-positive. You know, Knapsack were like a bit of a jinxed band. [We had] a bit of an ongoing joke about having a little bit of a curse. We talked a little about how we need to stay positive no matter what sort of crazy shit goes wrong. The Fest was the first thing we signed up to do, and after that we decided to do a handful of shows, play in some cities that make sense, then all of a sudden it was like, “Well shit, we’re doing this.”
SHEHAN: Sergie got on board too; he wanted to do it. Then Tom, the manager, he’s pretty persuasive and once he gets something in his mind he starts pushing so it was like, “Why am I fighting this? Why not just do this? It would be fun.” So that’s how it went down.

Does the band have the same lineup as it did before it broke up?
SHEHAN: It’s me, Colby and Sergie. I sing and play guitar, Sergie plays guitar, Colby plays drums. We had lost our bass player on the last tour so we had a fill in and we have a fill-in now: Ed Breckenridge from Thrice is playing bass.

You just played a show in San Diego. How was it to be back onstage playing as Knapsack?
SHEHAN: It was super-fun! I’ve been on the stage playing ever since Knapsack so the getting onstage thing is kind of the same thing for me, but it was really fun to play the songs, and everyone was pumped, so, in turn, we were pumped. It’s a different energy than the Jealous Sound. I had a great time.
MANCASOLA: I had a blast! It felt like everything we wanted. We wanted a super-tiny place with a room full of people that were really interested but would also be forgiving of any mistakes that may happen, and it all ended up being super-fun. We felt good about the way we played; there were no major fuck-ups. I’m the one person involved who has not really continued to play music since Knapsack broke up. I play drums about once a year so I felt good about the way I played. Ed nailed his shit, and it was all good.

What have you been up to since the band split?
MANCASOLA: I worked around music for about five years after Knapsack broke up, and I’d go out and see live music all the time. It’s not like I swore against it or whatever. I live in San Francisco; my drums are in the closet. It’s not like I’m in the suburbs where I can just head out to the garage and bash shit out, ya know?

Rancid and Transplants are both fronted by Tim Armstrong, and the bands recently toured together. Although it doesn’t sound like Knapsack will be around after these few shows, could you ever see them touring with the Jealous Sound?
SHEHAN: That would be sweet, but I don’t know if I could take 30 songs back-to-back, screaming my head off. I don’t think I could make it. It would just be odd and too punishing for me.

Are you going to be re-releasing any of your stuff? Will CDs be available at shows? New merch?
SHEHAN: Our hands are kind of tied on that. We can’t really get access to that stuff. We tried to get our hands on that stuff because we really wanted to do it but the answer to that question is no.

Anything else you want to say to your fans?
SHEHAN: Come on out! Just show up. If you show up, we’ll show up. We’re showing up regardless. Whether you come out or not.
MANCASOLA: We didn’t expect to be doing this 15 years later. It’s a little bit crazy and cool how it’s taken on somewhat of a life of its own. It’s shocking and a nice pleasant surprise that we get to hang out together this fall. ALT