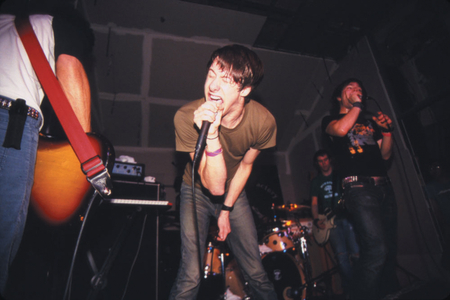 Back in 2003, SoCal post-hardcore heavyweights THRICE were poised for a major breakout. After issuing two full-lengths on the indie imprint Hopeless/Sub City, the band had just signed a deal with major label Island Records, and right out of the gate dropped arguably one of their finest efforts, The Artist In The Ambulance. Crammed with unforgettable hooks, pummeling riffs and a sound perfectly in sync with the moment, the album was like a loaded rocket launcher capable of destroying entire city blocks–if fired by a competent marksman. Well, it turns out that was a pretty big “if.”

The first single off that release, “All That’s Left,” had listeners primed, but when it came time to deliver a knockout punch with a follow-up, the band and label were at an impasse. Thrice decided that the title track from the album should be the next single, but the label was pulling for a safer bet instead with “Stare At The Sun.” Guess who won that debate?

“We were soliciting treatments for a video [for “Artist In The Ambulance”],” says Thrice drummer Riley Breckenridge. “We were actually days away from a video shoot for the song when the label and a prominent radio station’s program director made an 11th-hour decision to suggest ‘Stare At The Sun’ because the title track didn’t have a ‘hook.’ We butted heads for a few days before we finally caved, scrapped the treatment and the shoot and went ahead with ‘Stare’ as the second single. The song ended up flopping at radio, the video had a short-lived stay on Fuse and MTV2, and five years later, ‘The Artist In The Ambulance’ is probably the most popular, most downloaded and best-received song we’ve written to date.”

If you’ve been keeping score at home throughout the years, you know that the above story is just a taste of the age-old conundrum that plagues artists and labels. On one hand, you have creators–musicians, producers, etc.–and on the other, there are the label folk. Artists–in this scene, at least–are generally interested in creating what they want to create and hopefully making some cash while at it. For labels, however, the dollars often must come first, especially in 2010. That setting lends itself to a host of potential disputes that can and do arise between bands and their labels, whether it’s about a group’s sound, look, aesthetic or approach to marketing. All too often in these debates, the label emerges the victor, even if it ends up hurting profits in the long run. “I think one of the most difficult things for bands to deal with is when labels are reluctant to stray from their business model for different bands with different goals,” says Breckenridge. “At times, it seems like there’s a ‘rock band publicity and marketing template’ that bands can be shoved into if they aren’t careful. I think a large part of our experience with that type of thinking when we were on Island was rooted in the lack of job security within the industry. Nobody’s going to take a chance straying from the model when failure could end up costing them their job.”

Thrice’s relationship with Island grew even further strained over time, largely exacerbated by industry politics and the band’s evolution away from the mainstream. Who would’ve thought a major label wouldn’t be interested in a thematic rendering of the four elements like Thrice’s series of EPs, The Alchemy Index? (Read: sarcasm.) “[That album] was the nail in the coffin in our relationship with Island,” says Breckenridge. “We recorded all of it knowing that the chances of them liking it or knowing how to market it were pretty slim. We were pretty surprised that they signed off on the double-album concept record at all. I think they were hoping that there would be at least one solid radio single in the batch of 24 songs we’d written, for which I think there were a few possibilities, but they ultimately didn’t think they had anything to work with. The point of contention ended up being an old demo for a 25th song that we’d scrapped. They insisted that it appear on the record, either replacing one of the existing 24, or as an extra song. We didn’t want to do either for a variety of reasons, and in the end, it was the argument that led to the ‘Maybe we should just end this relationship’ phone call. I’m pretty sure it was less about the song and more about our inability to sell boatloads of records and their confusion with how to market a band like us. Luckily, they let us keep the records, and we ended the relationship amicably.”

A recent example of labels and artists possessing differing views on the future of the band and the industry in general is the feud OK GO are embroiled in with their label, EMI. The crux of the dispute centers around EMI’s restriction on the embedding of videos–in this case, the embedding of music videos hosted on YouTube and streamed onto other sites and blogs. That very pop-culture process single-handedly catapulted the band to their current level of notoriety. Perhaps it worked a little too well. Some time ago, labels got wise to online video embedding and forced YouTube to pay them royalties for views. But it was decided that those royalties would only be for views directly on YouTube; embedded videos wouldn’t apply. When EMI decided to block the embedding of the band’s videos, thereby pushing internet surfers exclusively to YouTube if they want to see OK Go videos, thus generating royalties.

OK Go from the “Here It Goes Again” video

OK Go frontman Damian Kulash recently contributed an op ed to The New York Times on the subject, calling out EMI and outright disagreeing with their plan. Kulash wrote, “The numbers are shocking: When EMI disabled the embedding feature, views of our [“Here It Goes Again”] dropped 90 percent, from about 10,000 per day to just over 1,000. Our last royalty statement from the label, which covered six months of streams, shows a whopping $27.77 credit to our account.” Kulash went onto analyze the dollars and cents of the decision not only for his band, but for the label, too. “Clearly the embedding restriction is bad news for our band, but is it worth it for EMI? The terms of YouTube’s deals with record companies aren’t public, but news reports say that the labels receive $.004 to $.008 per stream, so the most EMI could have grossed for the streams in question is a little over $5,400. It’s decisions like these that have earned record companies a reputation for being greedy and shortsighted. And by and large they deserve it.”

In other instances, labels have rejected artists’ ideas right out of the gate. NEW FOUND GLORY have a dedicated following, multiple gold records and a great reputation within the industry. Yet business folks in charge of running the mid-to-recent part of NFG’s career were dead-set against many of the things that made the band the pop-punk household name-things like their covers EP, 2000’s From The Screen To Your Stereo. For years, NFG petitioned MCA/Geffen/Interscope to let them release a sequel, but they couldn’t get label support. So when NFG were finally free from their contract, they re-teamed with their former label, Drive-Thru Records, in 2007 for the release. It was a win-win for all involved. “We’d been talking about doing [From The Screen To Your Stereo Part II] for a couple of years,” says NFG drummer Cyrus Bolooki. “The first [Screen] did really well–it sold 250,000 to 300,000 copies on Drive-Thru, which is nuts, and people were always asking when we were coming out with another one. [But] every time we mentioned it to MCA, they’d be like, ‘Well, it’s a good idea, but we’d rather have you come out with an original record.’”

The band’s former corporate affiliate also missed the boat on NFG’s surprisingly well-received hardcore covers EP, Tip Of The Iceberg. Indie label Bridge 9 handled the release, enabling NFG to continue with their key objective: getting new music out to fans. The label’s owner, Chris Wrenn, told us, “[Iceberg] did really, really well. It was our first Billboard Top 200 release, and it was a huge seller for us. The cool thing was right afterward, we put out a Have Heart’s [2008 full-length Songs To Scream At The Sun] and that broke into the Top 200, too. So a lot of the New Found Glory fans came over and checked out all this other stuff that we were doing at the time.” NFG’s success outside of the major label system opened their eyes a little to what they could accomplish with an indie label, which was probably a factor when the band signed to mega-indie Epitaph in late 2008. “It was awesome to finally do whatever the fuck we pleased,” says NFG vocalist Jordan Pundik. “Before, being on Geffen, it was like, ‘If you wanna put out a 7-inch on the label, you gotta go through all the motions, jump through all the hoops. Now it’s like, ‘We want to record a 7-inch with Ian [Grushka, bass] recording his farts? Sure, put it out.’”

The bottom line is that times are tough. The economy is still struggling, record sales have been in the toilet even longer and there’s no end in sight. Label business concerns are unquestionably valid and while EMI do employ the services of OK Go, they also have plenty of other people on the payroll-from upper management to mailroom. Few bands are naïve enough to think that they can sign to a record label and not be subject to some form of guidance from said label, especially since the label is often the only one with upfront coin at stake. At the same time, artists generally don’t respond well to outside urging. So where is the line drawn?

Thrice’s Riley Breckenridge says it all comes down to using good judgment. “[If I worked for a label,] I would hope that I wouldn’t sign a band unless I had a very strong grasp on what they wanted to accomplish as musicians and songwriters,” he says. “Aside from a band doing a complete 180 or falling into a gaping vortex of suck, I can’t see a situation where I’d need to shelve a project. I’d encourage them to keep writing in the hopes that they’d write something I felt better about, but that’s almost like trying to squeeze water out of a rock.” alt