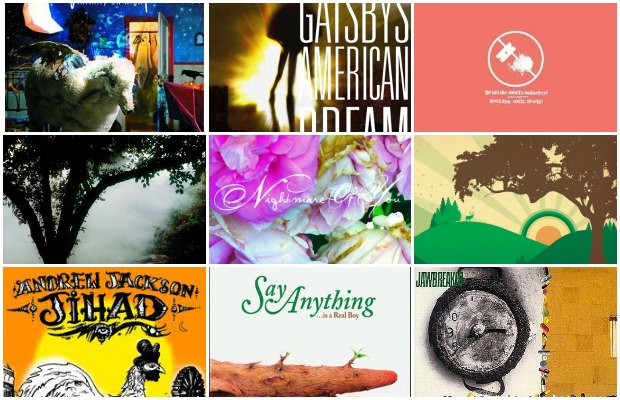 “Everyone’s a critic,” they say, but the artists-turned-sneering cynics in this playlist are not only critical, they’re self-aware—and they want you to know it. Jawbreaker once so eloquently put it in a song title: “Bad Scene, Everyone’s Fault.” However, these songs are doing their part to call out the bullshit and force improvement—or are they just filled with self-deprecation and the words of jaded grouches? You decide.

Andrew Jackson Jihad verbalized every person’s biggest fear in the first line of “Scenesters”: “Oh my god, there’s hipsters everywhere.” [Yes, I know it should be "there are,” but don’t shoot the music writer who’s just quoting the lyrics —copy ed.] Don’t start feeling too smug though: The folk-punk outfit also call out hardcore kids (“How do they look so good while their convictions remain so strong?”) and those nailed to the X (“so fucking straight-edge getting high off of self-righteousness”). As for the rest of us music fans who don’t fall under either of the former categories, Andrew Jackson Jihad has a place for us, too: “Oh my god, there's assholes everywhere/Pretentious fucking assholes everywhere.” [B[BM]b>

BOMB THE MUSIC INDUSTRY! –“My Response To An Article In Alternative Press”

This is actually the first Bomb The Music Industry! song I ever heard, and it's kind of obvious why. When someone writes a song partially about your place of employment, you sort of owe it to them to listen, right? It's a pretty vicious ska-punk number that was inspired by a 2006 article in AP about REDACTED [Although if you want a clue, here's one: It's one of the bands in this very playlist —pot-stirring ed.]with potent lines like, “Here's the thing about the music business/The trick is playing trend-rock right before the trend hits” and “Get up, stand up, line up with the rest of them/S-A-F-E, you play it safe!” Sadly, BTMI! are winding down as a band this year whereas it appears the trend-rockers they were aiming at, after taking some time off, seem to be becoming more active again. No justice, no peace. [S[SH]b>

THE ACADEMY IS… – “Black Mamba”

The sect of the music industry at which this song points a finger hits a little close to home. I mean, well, it actually kind of sucker-punches the media in the stomach. (“Oh, Mr. Magazine/I never wrote one single thing for you/Or your so-called ‘music scene’/You both mean shit to me.”) But, we don’t take offense because we agree with Mr. Beckett’s point: Often artists are too afraid to take risks and create what they truly want to, and those who do are often quickly dismissed for taking a different approach. It’s a vicious cycle. [C[CW]b>

When Fall Out Boy released the first single from Infinity On High, many fans were left scratching their heads. On the surface, it looks like a glossy radio-ready pop anthem, but FOB were in on the joke. From the tongue-in-cheek lyrics (“Bandwagon's full, please catch another”) to the music video that’s a four-minute satire on the life of an unknown band turned major-label sellout, the song was representative of everything FOB were dealing with. By 2007, they had become kings of their scene, but were deemed “sellouts” at every turn by fans who just wanted Take This To Your Grave Part Two. FOB may have lost a few fans with Infinity On High, but they also gained thousands more, and along the way proved to the naysayers that they weren’t content with playing it safe. Turns out Fall Out Boy got the last laugh. [B[BM]b>

Off-beat Seattle-based rockers Gatsbys American Dream took many jabs at the scene in their heyday, but “Badd Beat” from their self-titled album is a front-to-back assault. They do it in classic Gatsbys fashion, though, burying their message in coats of high-pitched vocal sugar and bouncy, inoffensive pop guitars. A tuned-in listen will reveal singer Nic Newsham’s detailed criticism of greedy booking agents and package-tour politics circa 2006. It’s the kind of exposé many of their peers agreed with (“It would be too easy making 10 percent off the tours we book for you/So we figure we'll take as much as we can/Because it's not up to you”), but none would dare express in their songs (“Nobody has the guts to speak out/Because they're afraid/That they won't get the tours at the end of the day”)—another reason Gatsbys will go down as innovators. [B[BK]b>

If there is a greater, more succinct musical response to all of the implied snobbery and in-fighting in today's overarching loud-music-played-quickly-on-guitars scene, well, I've never heard it. Blake Schwarzenbach sets down the line of demarcation immediately with the oft-quoted but never-paralleled couplet, “You're not punk and I'm telling everyone/Save your breath, I never was one.” The original album this track was on, 24 Hour Revenge Therapy, was released nearly 20 years ago, yet this eternal battle-of-who-could-care-less that Jawbreaker deflated in less than two minutes still rages on message boards and snarky social media comments. When Schwarzenbach asks, “One, two, three, four/Who's punk, what's the score,” he doesn't want an answer as much as he wants everyone to link arms and dance. Because being at a club in a bad part of town with your buds is waaaay cooler than paying $30 to park at the Enormo-Dome to see Nickelback. [J[JP]b>

NIGHTMARE OF YOU – “Dear Scene, I Wish I Were Deaf”

Long before making fun of hipsters was a meme, Nightmare Of You were all over it in the hyper-fed-up second verse of this song. (Excuse the extended quote; it’s all necessary for optimum burn value.): “Start a band/Or throw a brick/You lazy hipsters make me sick/Don’t clap your hands/Don’t start to dance/Don’t let them know that you’re a fan/You’re living in Manhattan/Where are you really from?/Have you forgotten?/’Cause you may be playing your music loud/But it’s drowned out by your mouth.” Zing! [C[CW]b>

It’s hard to tell if Owen’s “Bad News” is introspective and self-deprecating or just a string of observations collected from more than a decade of touring. Either way, it’s a striking commentary on being a marginally successful musician in need of a reality check. Atmospheric orchestration and sampled percussion splash in and out, part of At Home With Owen's well-received production leap, but project mastermind Mike Kinsella’s acoustic guitar and frank delivery remains the focus. And that’s how it’s supposed to be: with Kinsella and his no-filter thoughts in the foreground, asserting his position on making it (“Free beer/And basement shows/Don’t mean you’ve made it”), ego-tripping (“You don't mean anything to anyone but me/And even I think/That you're blinded by conceit”) and perceived legacies versus what's actually real (“You’re a has-been/That never was/Or will be”). [B[BK]b>

Admit it: This is the first song that came to mind when you read the concept of this playlist, and with good reason—it's a master class in how to take down an entire scene. Throughout the course of six minutes (that hardly feels half that long), Max Bemis manages to insult hipster culture (“When you walk by a group of quote-unquote 'normal people,' you chuckle to yourself, patting yourself on the back as you scoff/It's the same superiority complex shared by the high school jocks who made your life a living hell”) as well as shoot a few arrows in his own direction (“I am shamelessly self-involved/I spend hours in front of the mirror, making my hair elegantly disheveled”). By the end, the one thing we all learn is that we're all kind of shitty people at times, and even though it might be fun as shit to judge others in the short run, it will always come back on you. [S[SH]b>