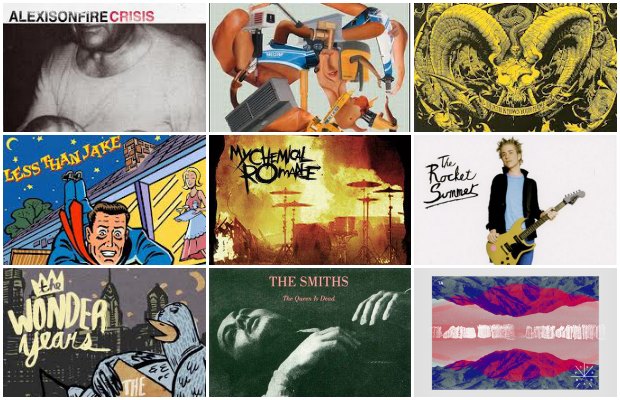 We’ve all felt that familiar itch to just run and never return. Whether it’s because we’ve felt alienated by our surroundings, that our dreams were bigger than our hometown or that we were no longer welcome sometimes, the flight instinct calls. Because that’s a feeling that often resonates with artists, it’s no surprise that we were in great supply of choices for this list. Here are some of the AP editors’ favorite tracks about that urge to GTFO.

ALEXISONFIRE – “This Could Be Anywhere In The World”

The town in Alexisonfire’s “This Could Be Anywhere In The World” is not merely borin—it’s murderous, hopeless and inescapable.When vocalist Dallas Green cries out for the “ghosts from broken homes” that haunt its binding streets, it’s hard not to imagine a particularly rough neighborhood in your vicinity, making the title ring particularly true. This heartbreaking portrait of orphans, decay and aching hearts might bum you out more than motivate you to get out. [CW]

This downright commercial-sounding track (well, by Dillinger standards, anyway) isn’t necessarily about getting out of town, but it does pose a similar sentiment. Frontman Greg Puciato belts out metaphors of suburban desolation (“Wood-paneled wagon/Carpool dragons killing me again;” “Is the can half-diseased or is the disease half-canned/And is the man half-machine or is the machine half-man?”) that might go through the minds of people who are hating their “normal” existence. While there is a sense of nobility in the acquiring of spouses, real estate, 2.2 children and a minivan to haul them to soccer practice, there’s a nagging feeling that this kind of American Dream™ isn’t what it’s cracked up to be. Moral: Sometimes you can stay home—it’s your situation that needs the change of scenery. [JP]

THE HOPE CONSPIRACY – “Deadtown Nothing”

Dissonant groove-monsters the Hope Conspiracy are consistently pissed off about something, and “Deadtown Nothing” is their ode to hating home. Taking a four year break between albums, 2006’s Death Knows Your Name proved the band had not gone soft in any way during their downtime. Kevin Baker’s burly woodsman-worthy delivery touches on the abandonment of watching people move on (“The best of friends/Are gone and dead”) to the doomed desolation of a place with nothing left (“We live in an empty shell/A dead town nothing/Going straight to hell”). [BK]

LESS THAN JAKE – “History Of A Boring Town”

Okay, so if you're at all familiar with Less Than Jake, you know that roughly 71 percent of their catalog could fall into the “gotta get out of this city” category lyrically. (Sometimes you have to wonder just what Vinnie Fiorello sees in Gainesville, Florida, considering he still lives there after all these years.) But there is no LTJ song more potent than this peppy ska sing-along from 1998's awesome Hello Rockview. “That same old crowd that drags me down/Another day in a boring town/That same old crowd that drags me down/A boring life in a boring town” is a sentiment this editor can certainly relate to in regards to his hometown, and I'm sure I'm not alone. [SH]

MY CHEMICAL ROMANCE – “Kill All Your Friends”

I recently visited some old friends who took me to see “the best band from our hometown, without fail.” Said band were patently awful, and I would rather slit my throat in front of a mirror and watch myself slowly die than move back home and worship mediocrity because there’s nothing else to exalt. On this B-side from The Black Parade era, My Chemical Romance perfectly capture the sentiment from the other side, with the dullard locals bragging how hard they are, while making fun of Gerard Way’s highfalutin desire to get out of town. (“You’ll never take me alive/Do what it takes to survive/’cause I’m still here.”) But then the reality of the situation becomes evident with lines like, “It's been nine bitter years since I've been seeing your face/And you're walking away and I will die in this place.” Way started his band after being shocked out of complacency by the tragedy of 9/11: Do you really need an excuse that large to jumpstart your life? [JP]

Leave it to Bryce Avary to write an upbeat, piano-driven pop song with an underlying message about being bored in your hometown. Don’t let the beat fool you; his point is clear from the beginning: “For about four years I've hated this town/There's so much I just want to get out/Since graduation was long ago/Please, somebody get me out of this hole.” Even the chorus, which sounds like a rousing summer anthem, is really a rallying cry to bust out of your town: “Cause this ain't where it's at/My friends will second that.” Hometown restlessness never sounded so damn catchy. [BM]

THE SMITHS – “There Is A Light That Never Goes Out”

A couple summers ago, I found myself jumping at every opportunity to flee. I would drive the long way everywhere, listening to this on repeat, just searching—not for anything actual, but seeking comfort in a very uncomfortable life. The only place I could find it was anywhere but the place where I was, so the solution was just to keep moving. This song perfectly bottles that essence of feeling lost when that welcoming light of home does seem to go out. Morrissey eloquently delivers many a desperate feeling, but the very specific feeling of losing one’s sense of belonging I pull from this song personally (Moz has been quoted explaining this song is about the inexplicable hope that convinces us to fight through life) and that pleading, “Oh, take me anywhere/I don’t care/I don’t care/I don’t care” just stab. Repeatedly. And make you want not to run away, but to completely disappear. [CW]

TOUCHE AMORE – “Home Away From Here”

On Parting The Sea Between Brightness And Me, their most poignant record to date, Touche Amore’s Jeremy Bolm expands on the love/hate for Los Angeles he’s written about before in “Honest Sleep.” The urgency of “Home Away From Here” is introduced in spastic upward bends, seeking an escape, while the verses don’t find any peace either, racing around anxiously. “It’s just that I have this problem/Where I want to be everywhere I’m not,” Bolm insists. Feeling over your hometown but stuck there at the same time is the struggle of the song. Coupled with a fear of losing years of familiarity and comfort to risk a new and untested environment. The song is highly relatable to anyone who’s ever felt the itch to pack up their life and leave. “It’s become clear/That what keeps me here/Is the sense of failure/And other nightmares.” [BK]

THE WONDER YEARS – “All My Friends Are In Bar Bands”

Is there another current pop-punk band who have written as many songs about their hometown as the Wonder Years have—and done it as well? Hometown pride (and disdain) are recurrent themes in the Philadelphia six-piece’s music. In this year’s Most Anticipated issue (AP 295), frontman Dan “Soupy” Campbell told AP the band’s fourth album is the third part in a trilogy about growing up, so chances are TWY aren’t finished waxing poetic about their town. “All My Friends Are In Bar Bands” is an anthem about growing up and aching to get out of your hometown, even when those around you are staying put. The song is a stark reminder that you’ll never get anywhere if you don’t go out there. [BM]