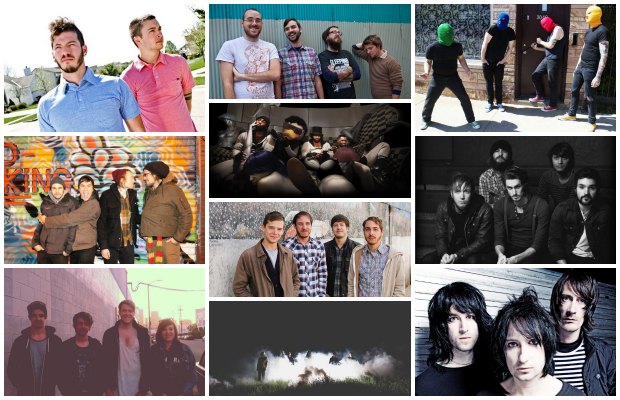 Not to play favorites, but—oh, who are we kidding? We’re definitely playing favorites in this week’s playlist as we delve into our 2013 “100 Bands You Need To Know” special and champion the bands we look forward to hearing from the most this year. Below is just one-tenth of the musical selection you can find in AP 297, which is out now!

Subscribe to this playlist on Rdio. Who are your favorite artists in the issue? Tell us in the comments!

ANNABEL – “The Age Of Possibilities”

It seems like only yesterday (or three years ago) that my best friend and I were interviewing Annabel for our college radio show, “Pregaming With Brittany and Whitney.” Seeing as Annabel are from Kent, Ohio—which is less than an hour southeast of the AP offices—it’s no surprise they’re a staff favorite. They may hail from a college town, but don’t even try to lump them in with those bands of bro dudes chugging beers and covering O.A.R. The quartet craft uplifting indie rock that delves into themes of growing up in a decidedly un-freshman way. Now don’t you wish you could say you went to school with these guys? [BM]

Gainesville, Florida’s Dikembe embrace play-pause rhythms paired with wound-up leads—the kind descended from Algernon Cadwallader, the Starting Line (ca. Based On A True Story) and Counterfit. That’s some good company to be in, and with all those acts either dead or dormant, Dikembe’s 2012 debut LP Broad Shoulders was an oasis to fans of the aforementioned. With most of the material hanging around the three-minute mark, your only complaint may be how fast it’s all finished. “I Just Don’t Understand What All These Kids Dig About Him” will give you a worthy orientation: catchy chords and their subsequent crashes, chilled-out emo vibes and vocals that sound like Kenny Vasoli by way of a basement show PA system. [BK]

One of my all-time favorite albums is Engine Down's brilliant 2002 release Demure. Produced by Brian McTernan, the album is an incredible master class in polyrhythmic post-hardcore that is downright hypnotic, with eerie, swirling vocals and well disciplined aggression. Fast-forward 11 years and North Carolina's HRVRD have made an almost identical record in terms of sonics (produced by Brian McTernan, even). But it's not mere idol worship or cheap rip-offs; the sound has been updated with a modern edge that is downright riveting. From The Bird's Cage is currently my favorite album of 2013, and I'm early anticipating seeing the band play our free 100 Bands party at SXSW on March 16. [SH]

LOSTALONE – “Do You Get What You Pray For?”
(song stream unavailable; enjoy the video.)
Oh, LostAlone, you had me at “Prozac eyes/Engulf our leaders.” Seriously, though. This band are stupendous, and though “Do You Get What You Pray For?” doesn’t highlight their signature three-part harmonies—a combined power they use to challenge boy bands to a cappella death matches—as well as other picks like “Paradox On Earth” or “Creatures,” its frantic, Muse-esque apocalyptic ferocity makes it impossible not to repeat, repeat, repeat. Though, the same could be said of any of the songs on the band’s latest album I’m A UFO In This City, which will see its U.S. release April 2. [CW]

LUTHER – “A Quiet Stretch Of Weather”

Philadelphia’s Luther are one of the Fest scene’s best-kept secrets. I had seen the name tossed around online for months but assumed the music would be as generic as the moniker (sorry, guys.) Don’t make the same mistake, no matter how tough the band made themselves to Google. They’re not as rough around the edges as you would expect a Fest-associated act to be—actually, they aren’t rough at all. Luther would fit in just as well on the summery soundtrack of a coming-of-age flick circa 1999. Maybe that feel-good timelessness is the secret to their appeal. “A Quiet Stretch Of Weather” is one of many alt-meets-punk cuts from the band’s breakout album, Let’s Get You Somewhere Else. Standout sing-along line: “I hope I don't die when I'm 40!” [BK]

MASKED INTRUDER – “How Do I Get To You”

As someone who is an unabashed pro wrestling fan, there's nothing better in my eyes than a good gimmick. Masked Intruder's gimmick—that they're a quartet of recently paroled (or is it escaped?) ex-cons planning on stealing your heart and your wallet through campy, lovelorn pop-punk songs—is brilliant, and a huge breath of fresh air to the traditional three-chord formula. I can't wait for their next album, and the one after that, and the one after that—and their eventual Live At Folsom Prison release, too. [SH]

Vessel, the major-label debut of Columbus, Ohio, ricochet-pop duo twenty | one | pilots, is filled with plenty of synth-driven pop songs worthy of rotation at raves the size of forests. But the piano-driven track “The Run And Go” is closer to Ben Folds and the AM-radio pop of the ’70s (ask your parents about Leo Sayer. Or Google him yourself. Or pretend Scissor Sisters are so positively “innovative”) than today’s typical club fodder. But because we’re talking about Tyler Joseph and Josh Dun, the song isn’t necessarily a breezy listen. Joseph is telling someone (his girlfriend, his parents, Dun, a fat, balding, middle-aged rock critic) he’s just killed a man and he could really use a friend right now. Whether the victim is a person or a metaphor for something else doesn’t really matter: The bouncy “dit-do” chorus sticks in your head like sonic polymer and by the song’s end, you’ll want to go on a cheerful tri-state crime spree. But you won’t: Because depending on the severity of your actions, you might not be allowed to have a copy of Vessel (and something to play it on) in your cell. And that’s a real crime. [JP]

I didn’t start getting into hardcore music until I began working at AP, so when I find a band I like, I feel like doing cartwheels in my office. When I first played Vales’ Clarity EP, I was probably doing something like checking my email as the opening Brand New-esque instrumental strains of “Standing Alone (Isolation)” came on. Then, vocalist Chlo Edwards let out a throat-wrenching hardcore scream, shattering every outdated notion that women are somehow less hardcore than their male equivalents. When she wails, “Why are we still standing?” feel free to get off your ass and slamdance your heart out. Or, you know, do cartwheels if that’s your thing. [BM]

THE VENETIA FAIR – “I: We Used To Worship The Moon”

I discovered this group of maniacs in 2009 and have latched, leech-like, onto their asylum-cabaret since. Recently, they released fury with their sophomore full-length, Every Sick, Disgusting Thought We’ve Got In Our Brain, which takes their “Panic! At The Disco just lost their shit and went on a killing spree”-sound and fills it out for maximum madness. “I: We Used To Worship The Moon” starts with singer Benny Santoro’s tremulous vocals pleading—as if to a second personality—“get a fucking grip, here” and builds into a full, massive chorus that demonstrates that while these guys may be up to their same tricks in some respects, the Venetia Fair have grown and will continue to. Here’s to a sick, disgusting 2013 for this band. [CW]

There are two seemingly overarching philosophies regarding the state of music today. The one frequently run up the flagpole by jaded hipsters and long-in-the-tooth music writers is that everything’s been done before and better, so there’s no real need to engage with anything current because, hey, it’s going to be replaced by some other living, breathing copy machine. The second philosophy is that while everything might have been done, you can measure artists’ vision by how well they stamp their personalities on established music genres. Which brings us to Atlanta contingent WatchTheDuck, whose amalgam of moody hip-hop throb, dubstep squelch and Jesse Rankins’ soulful, commanding vocals (somewhere between the late James Brown and hip-hop fulcrum Chuck D) has arrived to school all of those genres’ various bitches. “Poppin’ Off” is what you get when a bunch of fearless dudes take the best parts of musical idioms, drop the science on unsuspecting heads, and leave the party with your girlfriend. And you’re okay with it, because you’re too busy playing the track over and over again to care. [JP]