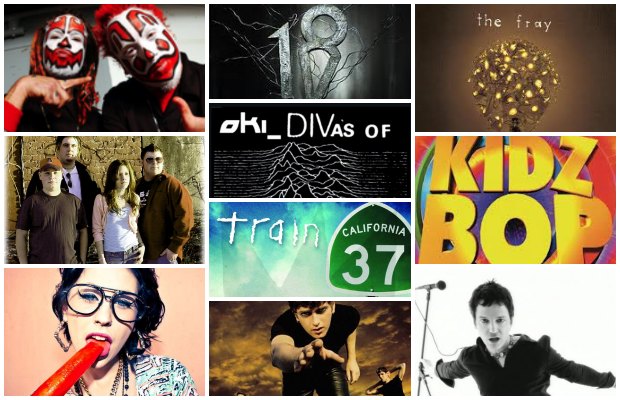 Because sometimes editors sit in a room, look through each others’ music libraries and exclaim, “Wow! That’s a lot of Nelly.” Because I heard our editor in chief singing “Brown Eyes” by Lady Gaga last week, and because sometimes we need taken down about five notches on the arrogance scale, last week, we scoured each other’s iTunes libraries and picked the most ridiculous or unexpected things we could find and said, “Explain this. Publicly.”

So, here we are, exposing our deepest, darkest music secrets. What’s the most ridiculous thing on your iPod? Tell us in the comments!

I witnessed Eighteen Visions a few times in my teens. I still remember calling my father mid-set so I could get whisked away from the vomit-inducing light show of the fashioncore freakshow laid before me. Either I've regressed or I finally “get it,” because a decade later, the 18V discography speaks to me. Even the self-titled LP, the one I often describe to people as “a more legit Papa Roach.” Never once has that been accepted as a good thing. They opened their final show in 2007 with “Black And Bruised,” a semi-deep cut from it. This is brutal bar rock that Scott Weiland would be proud of. Sample lyric: “You hang ’round me/Like a fuckin’ disease.” As a born-again fan, a reunion would be most welcome in 2013. [BK]

When it comes to my iTunes library, I’ll pretty much defend anything. Ke$ha? Sure. Four Jewel albums? No problem. My Disney playlist? To the death. But the Fray? I’m not even sure I can defend this band. I fell onto the Fray bandwagon after their wholesome brand of piano-pop was pushed onto the airwaves and into my ear canals in 2005. Eight years, two albums and one concert later, and I still can’t name another song off either of the Fray albums I own, besides “Over My Head (Cable Car)” and “How To Save A Life.” I quickly realized the Fray fell into the category of bands who, while able to write a catchy radio single, make music that’s boring and generic as fuck. Several years ago, I was listening to the radio and the DJ was announcing the next song, which happened to be by the Fray. He prefaced it with (and I’m paraphrasing): “I know everyone loves the Fray, but this band sucks.” I took it as a sign from the music gods telling me to turn the station. [BM]

Ah, a song from one of the many compilations I was suckered into buying at Warped Tour as a youngster. Tracks from All-Girl Stage Crew Vol. 2 reside on my iPod, many of them never having met my ears. Such was the case of Hydraulic Sandwich’s “Jenny And Jonny” until called out by an editor who glimpsed the ridiculous name (slang for beer, says Urban Dictionary) and told me it couldn’t be a real band. I listened to this song all the way through for the first time last Thursday and decided I really need to scrub my iPod of all compilations. You don’t have to listen, but imagine a not-so-great version of Candy Hearts echoing from the confines of a rusty can, telling the cheesy tale of a “rocker” who becomes a “stalker.” Oh, dear. [CW]

I once had the good fortune to hang out with Shaggy 2Dope and Violent J somewhere in the outlying suburbs of Detroit. That comment is neither ironic nor sarcastic or otherwise meant to be disparaging in any way. The Clowns’ attitude toward their craft, the business (fug it) and celebrity culture (fug dat, too) was far more down to Earth than most of the nü-metal dullards that brought down AP’s collective morale in the late ’90s and early ’00s. This little number from Bizaar is a charming little ditty about how the Clowns have to prove their loyalty to a friend by telling him the truth about something that went down. (“Let me make this quick/I gave your mother this dick.”) Yes, from the description of Mom’s posterior to the technique that leaves the Clowns weak, this song is puerile, misogynist and cringe-inducing. But the real punchline is who they’re supposedly “apologizing” to in the first place. Sure, the track is decades old, but I’ll be damned if I’m gonna pick at any scar tissue that might jumpstart any kind of Motor City hip-hop war. [JP]

THE KIDZ BOP KIDS – “Float On”

I've always been a sucker for novelty records. It's the reason I own a copy of Jack Brickhouse Presents Great Moments In Chicago Cubs Baseball, Jesse “The Body” Ventura’s 12-inch picture disc and even a 7-inch shaped like the Star Of David. But fewer things scream, “NOVELTY!!!!!!” more than a group of pre-pubescents covering Modest Mouse's “Float On.” It is hilariously creepy or creepily hilarious; take your pick. If this were pressed for Record Store Day, I'd buy two. [SH]

Essentially an ode to coked-out hipsters, this song has enough ridiculousness to fill my irony quota for years. We shouldn’t feel guilty or ashamed of things we like, and this song is hilarious. So yes—snorting-sound samples and all—I like it. I mean, c’mon: “Her boyfriend’s in an indie band and got a moustache/The music’s fuckin’ lame/He’s lookin’ like a muskrat.” You know that guy. Also, Kreayshawn’s mom was in a garage-punk band called the Trashwomen, so she was born with more cred than you. “Hustle hard since Fisher-Price,” yo! If it’s any redemption, I would have never noticed Kreayshawn if I hadn’t seen James Dewees making fun of her on Twitter a couple years ago. [CW]

When Jason told me he was going to make me write about my beloved Matchbox Twenty, I defended them with, “But I only have their old stuff!” (As if I was talking about the fucking Ramones.) Regardless, I have nothing but love for my Matchbox Twenty collection (three full-lengths and an EP, natch). Being a child of the mid ’90s/early 2000s, Matchbox Twenty were a constant on the radio, and as you can tell from my previous embarrassing song choice, I’m kind of a sucker for Top 40 radio. But unlike the Fray, I don’t just like two songs by Matchbox Twenty—I like most of their songs, and will keep defending them for years to come. So judge away, readers. I’ll keep rockin’ out to “Real World” and “3 A.M.” and “If You’re Gone.” Feel free to sing along. (Don’t worry. I won’t tell anyone.) [BM]

OKI vs. PARAMORE – “Love Will Crush Us Apart”

I thought Cassie Whitt’s brain was going to splatter against the back wall of Heaven when she heard this mash-up of Paramore’s “CrushCrushCrush” and Joy Division’s somber pop masterpiece “Love Will Tear Us Apart.” Upon hearing it, she made a face that looked like someone’s mom trying to see herself through a funhouse mirror without her glasses. And rightfully so: This track is part of a ’net-only download LP called DIVas Of Joy Division which slaps assorted female pop acts (Katy Perry, Cher, Beyonce and Missy Elliot among others) alongside underground rock’s most depressing band. I defend the track (and the whole project) because a) producer Oki’s choice of source material and his deftness with the mix is genius, b) the concept is completely perverse and c) the track has the innate capability to rankle pop-fed youngsters and elderly alt-rock brontosauri alike. Kill your idols: If they’re already dead, desecrate the memory. [JP]

It might be hard for some of you youngins to come to grips with this, but there used to be a time when liking Third Eye Blind was definitely the kind of thing you kept secret from your friends. (That time, for the record, was “any day pre-2007.”) But a few years back, a ton of AP-centric bands started singing the praises of Stephan Jenkins & Co., including members of Panic! At The Disco, Pierce The Veil, All Time Low and Of Mice & Men, so now I'm a little more comfortable admitting I like this band—although I will say I walked out of their show at SXSW a few years ago because it was unbearably awful, and this song isn't much more than Jenkins trying to write his version of “We Didn't Start The Fire.” It kinda sucks, but that's okay, because I'm comfortable enough in my musical taste to admit it. [SH]

When they’re not merchandising wine products, Train (still) write some of the best radio hits around. “This'll Be My Year” is a catchy and informational recap of the United States’ and Train’s history with lead singer Patrick Monahan's rocky personal anecdotes sprinkled on top. You could say it's the “We Didn't Start The Fire” of the mom-rock generation. Sure, the overdose of pop-culture references on California 37 come off as corny and slightly weird coming from a 44-year-old father of four (“Even Bieber ain’t forever!”), but rarely do you hear a mainstream act reference their humble beginnings (“Train leaves San Francisco in a $1,000 van”) and admit to randomly finding love again on the road (“2004 began in May/On tour when I met you”). [BK]