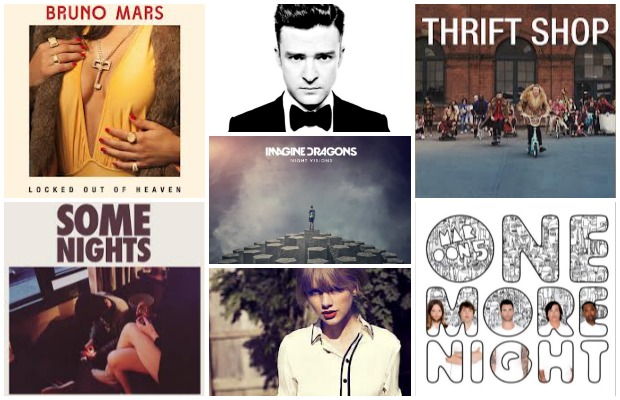 Now, don’t go getting all high and mighty on us. Even those of us who refuse to turn on the radio end up exposed in varying doses to Top 40 pop. Admittedly, most of it is abhorrent, but for those desperate occasions when you find yourself with a dead iPod and a case of CDs too far out of reach to put in, here are some tolerable (and some downright good) radio hits to survive your drive and save you from your local butt-rock station.

The thought of doing this list made editor in chief Jason Pettigrew physically ill and he opted out, promising he would repay us in pizza for his absence.

The rambunctious title track to fun.'s Grammy winning album could have easily been the lead single and led the band up the same slope of success. It simply defies dating, making just as much sense today as it would if it had debuted at the Live Aid mega-concert in 1985. The opening a cappella layers are a modern day “Carry On My Wayward Son,” with Nate Ruess theatrically owning it until he's joined by some triumphant tribal percussion, like a happy part of the Lion King. Pop radio is better for “Some Nights.” [BK]

I first heard this song repeatedly on a road trip to see Taking Back Sunday last fall. I think the catchy little riff that mirrors the vocal melody of We The Kings’ “Check Yes Juliet” and the hand-clapped beat embedded themselves in my subconscious as I slept on the way back home. This band is relatively gigantic, and they came to little ol’ us to do a Friday Fives not that long ago. The band convey a “stay true” sentiment with “It’s Time” in a melodically pleasing and catchy way, and—most importantly—it feels sincere. [CW]

It may be a bit on the silly side, but that doesn’t make it any less addictin. Macklemore is probably the only rapper to rap about saving money, and do it with the perfect amount of cheek. (“Savin' my money and I'm hella happy that's a bargain, bitch.”) You could argue that “Thrift Shop” is either the smartest song of the year offering a critical look at our economy and spending habits, or it’s a frivolous would-be club anthem and nothing more. But who really cares? Either way, it’s a hella good jam. [BM]

Funky pop titans Maroon 5 have dug their mainstream trench deeper with each album. At present day, they're pumping out club bangers like “One More Night,” which caught my ear a few weeks ago in a dollar store. I froze in the corner under a ceiling speaker almost as if to catch up with an old friend (2007’s It Won't Be Soon Before Long). It seemed the band had pulled the classic girl next door move—becoming even sexier while I paid them no mind. The topic of balls-versus-brain is turned into a life-or-death dilemma, backed by chirping reggae riffs and manufactured FM radio beats. “Trying to tell you no/But my body keeps on telling you yes/Trying to tell you stop/But your lipstick got me so out of breath/I'd be waking up in the morning/Probably hating myself,” admits vascular frontman Adam Levine with arms-up, finger-pointing inflection. Play on, player! [BK]

BRUNO MARS – “Locked Out Of Heaven”

I didn't pay much attention to Bruno Mars before this song, although I thought “Grenade” was pretty catchy (and the video for “The Lazy Song” was a good time). But seeing him perform this song on SNL, the Grammys, et al made me fall in love with it, and I plunked down a whopping $1.99 to buy Unorthodox Jukebox. (Thanks for the deal, Amazon MP3!) It's definitely the best song on the record, but there are some other solid moments, too. And sure, this song sounds an awful lot like the Police, but who cares? I'd rather have the entirety of the Top 40 sounding like that band than the awful dance-pop garbage most of it currently is. [SH]

TAYLOR SWIFT – “I Knew You Were Trouble”
Does T. Swift make me want to punch a hole through my wall? Often. Do I get the fascination with her? Absolutely not. Never. No. However, the electronics-laden chorus of this song is just dramatic enough that I gave the song a voluntary second, then third, listen. As for the rest of the song: Please grow up, Taylor. Release yourself from this pre-teen, bouncy, love-angst rut. This song would be great—not to mention more cohesive—if the verses matched the energy and tone of its wonderful chorus. [CW]

I’m just gonna make a wild assumption and say the majority of adults age 18-25 got a little (or a lot) excited when Justin Timberlake announced his return to music January 10. We all have our guilty pop pleasures, and Timberlake is definitely among the least guiltiest, way above Ke$ha and LMFAO, who will be long forgotten 10 years from now. It took a few listens for “Suit & Tie” to grow on me, and even now it’s not my favorite JT song, but I still find myself singing along to it whenever I’m in my car and it comes on the radio (i.e. every 15 minutes). Because it’s Justin. And I’m so glad he’s back to shake up pop music once again. [BM]