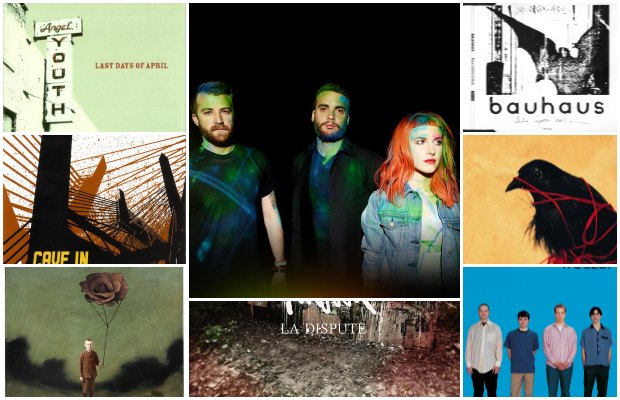 In January, we posted a playlist of 9 songs under 90 seconds and received a suggestion to compile the opposite of that list. Ask and ye shall receive (a few months later). Here are the editorial staff’s top songs that are 360 seconds or longer.

Producers of ambient spooky sounds should have just quit in ’79 when Bauhaus unleashed “Bela Lugosi’s Dead,” a spectral composition that verges on ten minutes. It features creaking sounds, tapping percussion and ominous bass tones with a whopping three echo-y minutes of Peter Murphy’s vocals, which mumble-creep, wail and moan through vampiric imagery name-checking Dracula actor Bela Lugosi. It’s better known as the “undead, undead, undead” song by some and as “Stop! You’re scaring the piss out of me!” by my upstairs neighbors in my old, haunted apartment building. [CW]

Chalking it up to major-label woes, poor reception and the disapproval of diehard fans, Cave In covered up the existence of Antenna like a sex scandal. They famously snubbed the songs live, even while still on the record cycle, which is a damn shame: It holds up a decade later as a less vanilla version of Foo Fighters. Music videos were made, singles were sent to rock radio, but ultimately it proved too progressive for the mainstream and their metalcore-hungry followers alike. “Seafrost” is a true deep cut, an anomaly, exceedingly long at nine minutes, serving as throwback to Antenna’s drug-addict older brother still crashing in mom’s basement, Jupiter. Guitars wash out over a starry sustain, but it’s the booming fuzzed-out bass tone that actually takes the wheel, vocals also sitting in the backseat. When Stephen Brodsky sings, “I'm freezing,” his chilling falsetto could send shivers down Walt Disney's cryogenically preserved spine. [BK]

The title track from Death Cab For Cutie’s fourth full-length doesn’t see the band doing anything new. Frontman Ben Gibbard’s heartbreaking, poignant lyrics are set to somber piano music. The song may be just shy of eight minutes, but structurally, it’s fairly simple. (There are only 12 lines of lyrics, followed by the ending round of “I need you so much closer/So come on; come on.”) It’s not the most well-known song on the album, stuck somewhere in the middle between standouts “The Sound Of Settling” and “We Looked Like Giants.” However, it does exactly what a title track should do: It brings the album together. “The Atlantic was born today, and I'll tell you how,” Gibbard sings as the song opens. You’d be wise to continue listening. [BM]

HIDDEN IN PLAIN VIEW – “THE INNOCENT ONES”

It was a younger, more miserable time when I repeatedly wallowed in this six-and-a-half-minute weeper about being fed up with self-sacrifice at someone else’s hands. Circa the four-minute mark, the song fades from repetitive pleas (“And so let's be honest, because I am through holding my breath as my lungs breathe for you”) into an instrumental, employing swelling strings for optimum painful reflection. And, though the song seems to point to breaking chains and escaping a destructive situation, there’s really not much in the way of an auditory cue representing hope in the end. Keeping it real(ly sad), HIPV. [CW]

This 16-minute song has been ripped off countless times (Midtown's “So Long As We Keep Our Bodies Numb We're Safe” and Cartel's “A” immediately come to mind, but there are many more), and for good reason—it's perfect. I used to frequent a club in Chicago that had a jukebox stacked with awesome CDs, and you'd get two plays for a dollar. I always picked this track, because hey, might as well get my money's worth, right? [SH]

“Another shooting on the southeast side.” So begins “King Park,” a song that retraces a drive-by shooting that took place in the band’s hometown of Grand Rapids, Michigan. An anonymous narrator offers insight on the incident (“The target a rival but they didn't hit the target this time/They hit a kid we think had nothing to do with it”), the community’s reaction (“Everybody gossiping, ‘Whose kid got hit? Where'd it hit him? And who could've fired it?’”) and the shooter (“Only 20 years old, they called him ‘Grandpa’/He was older than the others by a year/Maybe two.”) It’s a tense, powerful song that concludes with the shooter taking his own life, as lead singer Jordan Dreyer pleads, “Can I still get into heaven if I kill myself?” It’s the quickest six-minute-and-55-second song you’ll ever hear, but you won’t forget the story behind it. [BM]

LAST DAYS OF APRIL – “THE DAYS I RECALL BEING WONDERFUL”

How did this band never get huge? Location, location, location, as they say. Last Days Of April have piled up a decade-plus discography, but their Swedish roots and inability to tour stateside have rendered them one of the best-kept secrets in emo history. Craig Owens knows what's up—he's paid tribute by covering the passive-aggressive “Aspirins And Alcohol” off 2000's Angel Youth, where we also find “The Days I Recall Being Wonderful,” a beautiful six-and-a-half minute bloomer. It doesn't feel that long, thanks to the almost trance-like loop put in place, something ripe to score a teary-eyed movie flashback. Bleeding-heart vocals own the space, but not all the songs are so fragile. LDOA's crawl into the light from album-to-album is what makes them essential listening. [BK]

From Dead Kennedys’ “Short Songs” to Descendents’ Milo Goes To College, history has showed us that one-two-fuck-you brevity was part and parcel of the early days of punk and hardcore. So leave it to perennial wiseguys NOFX to drop “The Decline,” an 18-minute-plus treatise on the state of political discourse in our country, taking aim at corruption, conservatives and the meddling of religious leaders. The song itself is pretty ambitious, with many time changes, production effects and Fat Mike’s sneering indictments congealing into two large hands with nothing but middle fingers attached to them. And unlike most political screeds set to rock music, this one doesn’t sound dated. And as Americans, well, that kinda sucks. [JP]

Paramore’s new album is filled with all kinds of sonic high marks, but it’s the final track, the near-eight-minute “Future,” that is nothing short of glorious. The song starts like an informal demo session with Taylor York picking an acoustic guitar as Hayley Williams delivers some solemn, melancholy lyrics that can’t help but reflect the band’s mythology (“Don’t get lost in the memories/Keep your eyes on the new prize”). But a little past the three-minute mark, a tsunami of shoegazing harmonics and distortion fade up into the mix, giving the record a massive sonic heft. (The addition of the fake ending is a nice touch, as well.) “Future” is a complete curveball in this band’s storied career, and it is definitely the mark of a band who are, now more than ever, completely fearless. [JP]

WEEZER – “ONLY IN DREAMS”