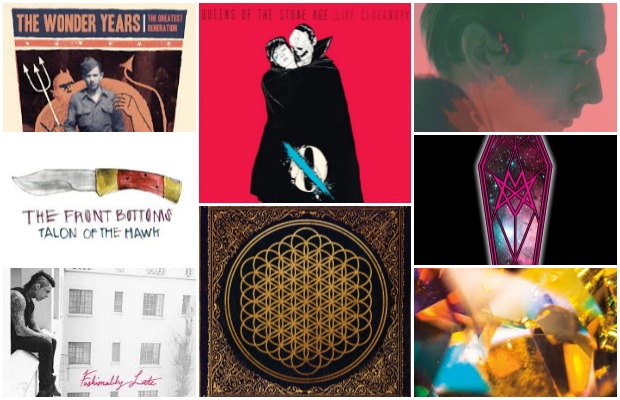 If you were walking down our halls this month, you might have heard some of the following songs blasting from our various offices. There’s never a quiet moment here, so every month going forward, we’re inviting you to share in the noise with a playlist showcasing what we’ve been yelling at each other to turn up (or down).

BRING ME THE HORIZON – “Deathbeds”

AP 299 cover stars Bring Me The Horizon have made many auditory appearances during the work days throughout their tenure on our cover this month. Having taken a glorious free-fall away from convention, BMTH embraced a new, atmospheric sound that leaves their old material and that of tired-and-repeated contemporaries in a swirl of aural mist on Sempiternal. “Deathbeds,” the dreamy bonus track from the album, which debuted on AltPress, can often be heard coming from my lair when I need to concentrate and drown out my surroundings. [CW]

Gabriel Bruce isn’t old enough to rent a car in America, but he has a voice and a songwriting style that belies his relative youth just enough that he could sit at the far end of a table where Iggy Pop and Nick Cave are arm-wrestling. Bruce’s import debut, Love In Arms, is mysterious, soulful and slightly twisted, but in a way that’s remarkably sophisticated. Before playing this track, a dear friend prefaced it by saying, “Selling five-inch aluminum discs with music on them isn’t enough anymore. People want to support charisma.” When it comes to Gabriel Bruce, this writer is all in. [JP]

I already know there are naysayers who cannot wait to claw at me from the comments for this one (“Blah blah fangirl. Blah blah ruining AP. Blah blah Ronnie.”) Such is the nature of the ever-inflammatory Falling In Reverse. Yes, this song is replete with hilarious and pompous lyrics. Yes, the rap-rock track, our first glimpse of their sophomore album Fashionably Late, is jarring, but it made you pay attention, did it not? Boom. You know you didn’t listen to it just once. Neither did I (and by virtue of proximity and the fact that I don’t have a door, neither did my co-workers). Like it or not, FIR continue to be masters of the catchy hook and chorus. [CW]

I’ve been listening to the Front Bottoms’ sophomore effort, Talon Of The Hawk nonstop for more than a week. (Ask Scott Heisel, he shares a wall with me.) The whole album is pretty great—even better than their debut—but the first single, “Twin Size Mattress” is easily the record’s highlight, blending a whole mess of genres (punk, alt-rock, emo) into a neat (or as “neat” as the Front Bottoms can get) four minutes and 25 seconds. All I can say is, Brian and Mat, if you ever need a tambourine player, I’m your gal. [BM]

Mindless Self Indulgence frontman Little Jimmy Urine isn’t afraid to drop assorted vulgarities while invoking God. But while the more kneejerk-prevalent, ecclesiastical types would plug their fire hose into a sacred hydrant and power-wash the singer’s face, the song is actually a wind-up of hip-hop stars who traffic in hateful, violent, misogynist imagery, but inevitably end up listing God in the thank-you credits of their discs. Who’s the evil one now, church-goer? Besides, it sounds good going down the highway at 80 mph… [JP]

Max Bemis has pretty solid taste in music. From taking out Ohio's unsung heroes the Sidekicks on Say Anything's last tour to his Equal Vision imprint label Rory Records (which is loaded with some top-notch talent), the guy just seems to have an ear for the best in alterna-pop. Case in point: Boston trio Pretty & Nice, whose new album Golden Rules For Golden People is a delightfully off-kilter example of what pop music would sound like in an alternate universe where Justin Bieber works at the Piercing Pagoda and The Adventures Of Pete & Pete is entering its record 21st season as the greatest TV show of all time. “Money Music” is a deep cut, near the end of the disc, but it's my favorite track for sure—it's a kind of stutter-stepped R&B keyboard-and-drums beat with vocals that remind me so much of Matt Mahaffey, ringleader of the massively underappreciated Self. (Seriously, go check out Gizmodgery and Breakfast With Girls, pronto.) The song twists and turns a half-dozen times before finally landing on its repeated outro of “We are all instruments,” and I for one am totally with being a part of that orchestra. [SH]

The new Queens Of The Stone Age album, …Like Clockwork, comes out on June 4, and you'd do yourself well to buy it, as it is a solid slab of jams (and QOTSA's first album in six years, which is ridiculous and hopefully a non-recurring experience). “Smooth Sailing” is my favorite song on the record, mainly due to an absolutely disgusting riff at 3:49 that legitimately makes my stomach queasy when I listen to it. Goddamn, Josh Homme is a fucking amazing guitarist. He's also a great singer, super-good looking and probably a really fun guy to shoot the shit with. (I mean, did you see that episode of No Reservations he was on?) This is quickly devolving into a plea to get Josh Homme to hang out with me, so before I go, I'll simply say this: Josh, I have a pretty decent record collection and a dog that loves belly rubs. Wanna come over and watch The Daily Show with me? [SH]

We chose the Wonder Years new album as one of our most anticipated releases of 2013. And now that The Greatest Generation is out, the editorial department can offer a collective sigh of relief, because this album fucking rules. The final record in a trilogy about growing up, “We Could Die Like This” encompasses that theme the best. “Memories flood back like photographs/All bright and out of focus, all drab with muted colors,” Dan “Soupy” Campbell sings at the beginning of the song. Seriously, if you haven’t picked up The Greatest Generation yet, you’re doing something wrong. [BM]