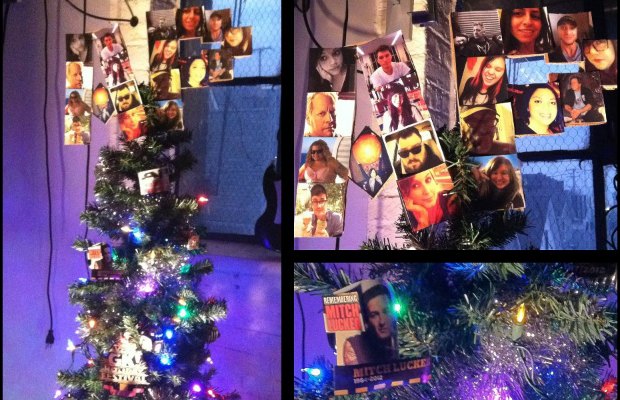 It’s that time of the year again. Houses are donning exterior lights that serve no purpose beyond “ooh, sparkling.” Objects that have no business doing so are making jingling sounds, and the number of times you’re likely to hear “elves” in a normal conversation is rising exponentially. It’s beginning to look a lot like crowded malls and your relatives’ crying children. Deck the halls with rolling eyes because here we go with some holiday songs to get you through the season. Humbug.

I'm not Jewish, but Atom Goren sure is. And he celebrated his heritage (while acknowledging the bizarre, anti-Semetic conspiracy theories about Jews taking over the world) with this lovely two-and-a-half-minutes of off-kilter synth-pop talking about the one day of the year when all Jews get together to plan world domination: Christmas. (The chorus: “Princess Di, we killed her/El Nino, we made it/Reggie White is stupid/Billy Joel, let's trade him.”) Obviously, he's taking the piss out of the whole thing, and obviously, I love it. [SH]

“Carol Of The Bells” by August Burns Red from Sleddin’ Hill: A Holiday Album

Hark how the bells/Sweet silver bells/All seem to say, “OPEN UP THIS FUCKING PIT RIGHT NOW!” August Burns Red released Sleddin’ Hill: A Holiday Album in October, and one of its highlights is this metalfied version of the Christmas classic “Carol Of The Bells.” The original arrangement is my personal favorite Christmas tune (though “Shchedryk,” the real original Ukranian composition is actually a New Year’s song) because it sounds spooky. Thanks for making it mosh-worthy, ABR. [CW]

“Silent Night” by Bright Eyes from A Christmas Album

With his rendition of “Silent Night,” Conor Oberst successfully turns a Christmas Classic into a wallowing pit of sadness—and I love it. A Christmas Album was released in 2002, and it has been a holiday staple for me since puberty. Christmas time is notorious for “cheer,” but it does come with its fair share of mental breakdowns, whether it’s the result of your overdrafted bank account or a disastrous family gathering. “Silent Night” kind of makes you want to drink eight glasses of eggnog and hang yourself from a string of Christmas lights, but, like, in a good way. [BH]

“Christmas With Satan” by James White from A Christmas Record

This wobbling no-wave, free-jazz party anthem from 1984 is groovy, shambolic and more than a little blasphemous. James Chance, leader of the confrontational funk squad the Contortions, drops some classy lyrical bon mots (“There’s no angels or wise men/And certainly no virgins/This Christmas can’t be made white/By any known detergent”) as the band deconstruct every holiday song from “Winter Wonderland” to “Hava Nagila” between verses. It sounds perfect over some poisoned egg nog, and let’s face it: Given the state of the world, it’s perfectly clear that, yes, “All year we’ve been waitin’/For Christmas with Satan.” Oh, and avoid the 10-plus minute version with Chance’s three-minute barfly-at-the-piano intro. It needlessly postpones your stagger-groove. [JP]

Although the VersaEmerge cover of this song totally rules (and Tay Swift’s, I regret to admit, is my guiltiest pleasure), the original 1953 recording of “Santa Baby” by Eartha Kitt is untouchable. Kitt, who passed away in 2008, played Catwoman in the 1960s Batman television series, advocated for LGBT rights and was just an all-around badass lady. I can’t help but feel a bit sassier after hearing Kitt’s sultry, pillow-talky voice give sugar daddy, Kris Kringle her modest, little Christmas list. I’m hoping Mr. Claus is on SeekingArrangment.com because I’ve been an awful good girl, too (and need some new Dr. Martens.) [BH]

I used to work for a chain of record stores in western Pennsylvania, which is how I cultivated the streak of misanthropic nihilism I proudly carry with me today. One of the things the district supervisors would stress was if we were going to buy music, we had better leave our cash with the company. So when this hateful 47-second nugget by these legendary punks first appeared on a 7-inch back in 1982, it was a double-win for me. I got to leave my money at an independent business (the cool indie punk-rock record store) thereby defying my corporate masters, while being able to vent my putrid, brown spleen toward all of the lemmings who lined up to buy tepid garbage like Asia, Fleetwood Mac, John Cougar Mellencamp. Brings a tear to my eye, really. [JP]

Circa 2004/2005, My Chemical Romance vocalist Gerard Way was in the prime of his fabulous, unholy-Southern-preacher, bluesy vocal affectation phase, and it’s time-encapsulated perfectly in this bouncy, punk-rock take on a Mariah Carey cheesefest. MCR’s version has been a tradition for me every Christmas since the band’s Three Cheers For Sweet Revenge era. Oh, who am I kidding? I listen to it regularly, no matter the season. [CW]

This may come as a surprise, but “Merry Christmas (I Don't Want to Fight Tonight)” went virtually unnoticed when it was released in 1987 as a B-side to the single, “I Wanna Live.” However, just like Elvis Presley and Kurt Cobain, Ramones gained even more popularity after their demise. This time of year you can hear “Merry Christmas (I Don't Want to Fight Tonight)” on the same stations that have Josh Groban and Mariah Carey on repeat. Regardless, it’s the original punk-rock Christmas song, and it still holds up. [BM]

In the microcosm of pop-punk Christmas carols, this rave-up completely clinches it for me. The arrangement is ridiculously ambitious, from vocalist Matt Thiessen’s melodic-layer overkill, all the way down to the shifting timekeeping of drummer Dave Douglas. The parts that fill me up with holiday cheer are the precise omission of words I’m tired of hearing (at the 2:27 mark) and the screamo gang-vocals chorus (2:56) on the final chorus. This rendition makes me wish it was Christmas every day, so I wouldn’t look like a complete dork playing this (and loving it) at the beginning of July. [JP]

For those fans who were lucky enough to know “Forget December” before Something Corporate released their greatest hits album in 2010 (and in today’s download culture, we have a feeling that includes many of you reading this), you can bet this song ended up on quite a few Christmas mixtapes. Like much of Something Corporate’s catalog, “Forget December” is a slightly melancholy pop-rock song that’s driven by Andrew McMahon’s earnest vocals and piano playing—and in this case, a children’s choir, too. If it’s not already on your Christmas playlist, go add it now. [BM]

“Last Christmas” by Frank Turner from The Second Three Years

Like the majority of Christmas songs, “Last Christmas” has been covered by everyone from Wham! to Jimmy Eat World. However, seeing as I have a major soft spot in my heart for Frank Turner, his cover of the simple and classic “love” song is my favorite. Turner may be known for his folk-punk songs about drinking, friends and drinking with friends, but god dammit if you don’t turn to complete mush after hearing this song. Or maybe that’s just me… [BM]

“You’re A Mean One, Mr. Grinch” by the Venetia Fair from The Pits

The Grinch. Now, there’s someone with whom I can identify about Christmas. I mean his early work, obviously. (After Heart Growth and his signing to Whocore Records, he really went downhill.) Who better to tell the story of a cheer-stealing sociopath than asylum-cabaret rockers the Venetia Fair? I really can’t think of anyone. [CW]