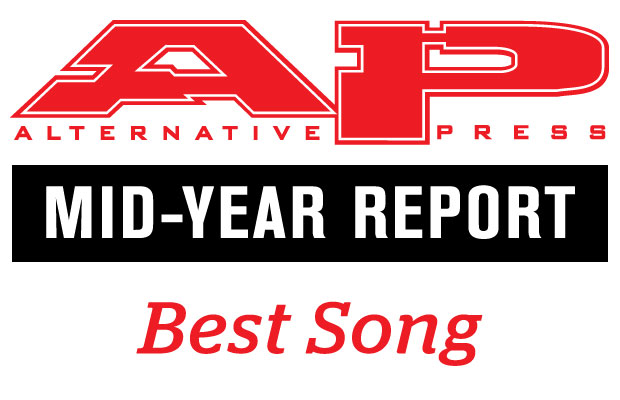 In this special edition Weekly Playlist, we bring you our favorite songs of the year so far as a part of our 2013 mid-year report.Which songs are your favorites of the year to date? Let us know in the comments!

“Without even listening to the lyrics, you can tell how much meaning lies behind the song. Musically and thematically, it’s a great representation of the album as a whole.” – Aisha B.

“It was a perfect combination of instuments and this new electronic feel that Bring Me the Horizon has adapted.” – Olivia L

If funky R&B rock by way of Boston can make it onto Warped Tour (where most “dancing” is dedicated to mall metal), you know there's some real transcendental shit going on. Bad Rabbits have infiltrated that market and beyond with their synchronized showmanship. For anyone on board since Stick Up Kids, the three-year wait for American Love was excruciating. The cover series released in between (with a Deftones cover that went viral) merely squirted lighter fluid all over the fire. This album does not harbor a bad song—“Can't Fool Me” was one of the singles, but any of the tracks could’ve taken that honor. Bad Rabbits remind us there's plenty out there beyond our beloved comfort genres—and that an open mind can be rewarded with a new favorite. [BK]

There's something to be said for consistency, and Cartel have carried that flag for years. Their stronghold on the pop-punk elite is no shocker, with angel-voiced frontman Will Pugh getting his due as of late, producing more rising talent. Hence, “Uninspired” is classic Cartel with modern production values for maximum catchiness. Hearing the band perfect themselves—with barreling, headbang-worthy riffs and an eagle eye for vocal placement and melodies—is progression in itself. It's a shame there's still no official full stream of Collider, because it seems to have been overlooked as a result. [BK]

THE DILLINGER ESCAPE PLAN, “WHEN I LOST MY BET”

Remember that day you had to go to the ER after you accidentally hit yourself in the chest with a captive-bolt gun? Or the one time somebody tried running your face under a sewing machine with a needle designed for leather and denim? None of that has ever happened to you? That's cool: On the most vicious track from their new album One Of Us Is The Killer, the Dillinger Escape Plan deliver a series of sonic blunt-force traumas that approximate the kind of terror and extremity described above. The cumulative power of Greg Puciato's room-evacuating bark, drummer Billy Rymer's deconstructed blastbeats and guitarist Ben Weinman's vectorial-mechanic approach to songwriting and soloing renders much of the rubric constituting “heavy music” hopelessly redundant. Dillinger have never conceded in their vision, remained remarkably vital since their inception 14 years ago (go delete 80 percent of your hard drive's music library now) and routinely bring the menace like no one else. This writer hopes if he ever flips his car on the highway at 96 mph, this is playing, right before the whole damn wreck bursts into flames. [JP]

GOLD FIELDS – “DARK AGAIN”
For several weeks, I hoarded my advance copy of Gold Fields’ Black Sun in my car, lovingly called it “Disco Sigils” (because of their pop sound and shiny album artwork) and listened to this particular song on repeat. The Australian quintet (one of our 100 Bands You Need To Know this year) sound like they are the coolest thing on the radio right now, but I don’t think the cool kids in Radioland have fully caught on just yet. So, my recommendation is that you catch this band while you can, treasure them and attempt to listen to this song only once. (I bet you can’t.) [CW]

I've been a fan of these Philadelphia retro-rockers for the past few years, and initially fell in love with this track when I got it more than a year ago, thanks to a demo version that was given away to all 2011 Weezer Cruise attendees. (Yeah, I went on a boat with Weezer; you wanna fight about it?) In short, the song is a mega-jam, the kind you'd want to have blasting out of your Trans-Am as you cruise up to the Dog ’N Suds to see if Cherie is working tonight, because she's out of this world, but her older brother Ron says if he catches you looking at her again he'll pound you into next Friday. But whatever, man—just pop your jean jacket collar, ask your friend for a jazz cigarette and turn the AM radio up, because this shit is gold. [SH]

If you follow my personal editors picks this week, you're gonna see a lot of Paramore, and that's because I'm still head over heels for just about everything having to do with this record. Case in point: “Ain't It Fun,” with its new jack swing rhythm, perfectly executed use of a gospel choir, boatloads of handclap-worthy sections, a bassline that just flat-out refuses to quit and synth squiggles that we haven't heard since the last time we watched Purple Rain on Netflix Instant. Wait, what do you mean Purple Rain isn't available on Netflix Instant? Guess we'll just fire up the ending of Jay And Silent Bob Strike Back instead… [SH]

It took me a little while to get used to Tegan And Sara’s latest album, Heartthrob, but after a few listens, the former indie-pop darlings’ new pop sound started to grow on me, especially the record’s first single, “Closer,” an upbeat, dance-club-ready anthem that samples a few electronic beats. (Although I’ll never get used to hearing the song in an Express commercial.) Whether you’re a fan of the sisters’ new sounds or you prefer their older material, you’ve got to give them credit for taking such an artistic jump—and landing so successfully. [BM]

Walk Off The Earth were one of our 100 Bands You Need To Know this year, but the Canadian quintet have been around since 2006. They gained a following thanks to their rendition of Gotye’s “Somebody That I Used To Know,” but instead it’s a creative cover (they all play one guitar) it doesn’t even begin to show the band’s range. “R.E.V.O.,” the title track from their latest album is WOTE at their best, demonstrating their knack for genre-hopping (indie-rock, reggae, alt-rock) and their shared talent for playing more instruments in one song than most bands play on an entire album. When the band shouts “Go!” at the 45-second mark, you’d be wise to get off your ass and move your feet.[BM]

Before WCAR reissued their 2011 album Understanding What We’ve Grown To Bewith three new, huge-sounding, melodic anthems, AP caught up with guitarist Joshua Moore, who divulged to us that he was convinced fans would “hate” where they went with the tracks. At the time, he also said “Hope” was the band’s collective favorite song they had ever recorded. It’s also my favorite song they’ve ever recorded, and an empowering joy to be a part of in a live setting. If those songs, produced by John Feldmann, who worked with the band on their upcoming full-length Tracing Back Roots, are an indication of the band’s future direction, count us in for the ride. [CW]