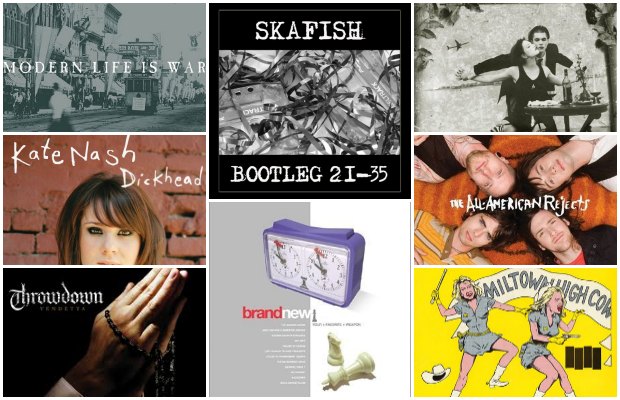 “An eye for an eye, a tooth for a tooth” isn’t always the best policy, Hammurabi, but sometimes it just feels too damn good to get back at someone who crosses you. Musicians have the perfect platform for vengeance, so there is no shortage of songs with horrific lyrical violence, showing off to haters and public airings of others’ dirty laundry. Oh, and the classic diss track (if you happen to be a rapper, Ronnie Radke or Sumerian Records).

THE ALL-AMERICAN REJECTS – “Gives You Hell”

The rock 'n' roll lifestyle isn't always an easy one, but Tyson Ritter doesn't care. He loves waking up “every evening” with a big smile on his face, while he shoots daggers at an ex who is still stuck working “at a nine-to-five pace.” Apparently, she couldn't hang with Mr. Perfect Cheekbones and dumped him, but Ritter's not hurting—he's kinda vengeful. “And truth be told, I miss you/And truth be told, I'm lying,” he sneers, proving that while living well might be considered the best revenge by some, another really good way to get back at your ex is write a song about how they'll never do better than you—and have it go four times platinum and hit No. 1 on the Billboard pop charts. [SH]

“Give me my money back/Give me my money back, you bitch/And don't forget to give me back my black T-shirt.” Thus sums up one of Ben Folds' most acrimonious breakups, and one he had absolutely no qualms about recording on his band's major-label debut, Whatever And Ever Amen. It was a pretty good way of getting revenge on whatever woman wronged him, seeing as how the album went platinum. The song became so popular internationally, Folds even recorded a version of it in Japanese, sending his bad vibes across the international date line. The music video is the best of both worlds, with the first verse in English and the second verse in Japanese. [SH]

Does this need an explanation? It was too obvious not to include Black Flag’s straightforward, 60-second, fed-up declaration of war. “We’re gonna get revenge!/You won’t know what hit you!” [CW]

Jesse Lacey looks like a mild-mannered enough guy, but judging from what he can do with words, I definitely do not want to piss him off. “Mix Tape” (which I’m sure many of you put on at least one mix tape in your time) starts off fairly quiet, but Lacey doesn’t waste a minute: He’s pissed at someone, and he’s going to make sure the listener knows how much he hates said person’s ink and music snobbery (“And the way you always criticize the Smiths/And Morrissey”), immaturity (“But when I say, ‘Let's keep in touch’/I really mean I wish that you'd grow up”) and overall façade (“I got $20/That says no one's ever seen you without makeup/You're always made up”). Consider it an early-2000s emo version of “You’re So Vain.” [BM]

This song perfectly portrays revenge of a more grown-up variety with storytelling accuracy that only Amanda Palmer could harness. The phrase goes “Living well is the best revenge,” but sometimes it gets to a point where merely living grinds the gears of the pre-cancerous human slime you’ve cut from your life, and you couldn’t care an atom’s worth. Palmer details the menial tasks of her “good day” for a seething Bitter Betty who would “rather be a bitch than be an ordinary broken heart,” and delivers one of my favorite effortlessly triumphant revenge lyrics ever: “I have finally made my peace as far as you and me go/But, I’d love to have you up to see the place/I’d like to do more than survive/I’d like to rub it in your face!” [CW]

Modern Life Is War made permanent fans in their melodic hardcore heyday—so when their reunion was announced on April Fools' Day this year, a skeptical internet mob raised their pitchforks until it was proven true. Denim-vested mouthpiece Jeffrey Eaton writes lyrics like AM radio and candlelight could be his only companions, and their introspective lens on hardcore reflected a silo-sized isolation only they could capture. In “Martin Atchet,” we learn about an unlucky blue-collar man with a lifelong resentment toward the rich corporate class and their “big stylish cars.” This class war comes to a head at the song's snarling bridge: “If he could write the headline/In the paper the very next day/It would read/'Violence works in mysterious ways'/And somebody is gonna have to pay/He's gonna get his revenge.” [BK]

Before Kate Nash dyed her hair and got extra dark and twisted (because she’s always been fairly dark and twisted), she was a feisty redhead whose debut album, Made Of Bricks, was among other things, a blistering assault against the men who had wronged her. And none summed it up better than “Dickhead.” You can practically hear her disdain when she sings “35 people couldn't count/On two hands the amount of times you made me stop/Stop and think why are you being such a dickhead for” in her delicious British accent. The relationship may be over, but Nash definitely got the final words in—and made them count. (Literally. She says “dickhead” 18 times.) [BM]

SKAFISH, “Take It Out On You”

Jim Skafish was a mover and shaker in Chicago's early-’80s new wave scene, blessed with amazing keyboard proficiency, a twisted worldview and a crack band whose members looked like a cross-section of a high school yearbook (the hot chick, the nerd, the foreign exchange student, the football hero, the hesher etc). I've rescued this track from internet obscurity because a) Skafish is a genius frontman who plays piano so hard, he may have dislocated a knuckle or two, b) Javier Cruz's synthesizer freakouts are sublime and c) the lyrics are amazing in their unbridled hatred (“You can slice a stray dog/You can beat a retarded kid/But you kicked me in the teeth/Gonna take it out on you/You, beautiful you”). Every time I broke up with a girlfriend, I'd buy a new copy of this album and completely wear this song right out. It's cruel that I got divorced this month and the damn thing isn't available on CD. I might have three scratchy LPs left, though… [JP]

Although the enemy on “Vendetta” is a little vague (we'll go with “the world”), the title track to Throwdown's chapter of OC-bred beatdown-meets-Pantera obsession is a spit-in-your-face revenge anthem. “This is pure hostility/This is vengeance/This is all that's driving me/This is a vendetta,” howls vocalist Dave Peters into the oncoming breakdown, as if he's praying to the church of Anselmo. Here's to hoping they make good on their promise to revisit the glory days on their in-progress studio album. [BK]