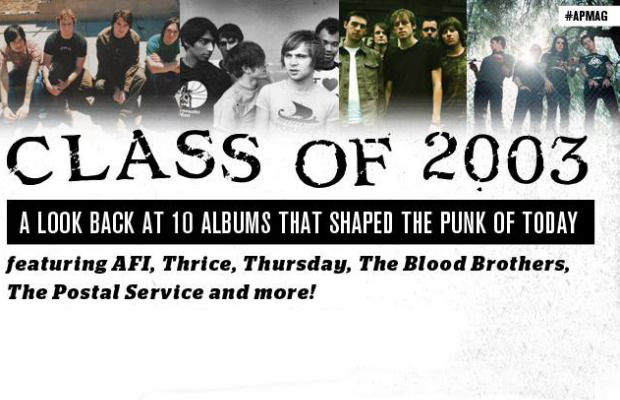 In honor of our annual Class Of 2003 feature in our September issue, we’re bringing you a playlist of additional songs from albums you probably can’t believe turn 10 this year. Be sure to pick up AP 302 (out now) to see what Thrice, Yellowcard, Saosin and more had to say about their 2003 albums.

There was a time when you couldn’t avoid Alkaline Trio’s dark video for “We’ve Had Enough” on TV (i.e. when music channels still played videos), which is ironic, considering the song is about being fed up with music sugary and commercially vacant enough for broadcast. As a wee goth-leaning tween in 2003 who had, well, had enough, I was pleased to see this morbid masterpiece infiltrate the airwaves repeatedly—even if I wasn’t cool enough and my internet connection wasn’t fast enough to know what Walk Among Us was at the time. This song is one of the many reasons Alkaline Trio would become one of my favorite bands. (Seeing them live a couple years later completely sealed the deal.) [CW]

I vividly remember sitting in the middle of a school bus on my way to a soccer game my eighth grade self was about to play in. I was sharing a seat and headphones with my best friend at the time as we belted out the lyrics to this song delivered to us by a third generation iPod while sluggishly rolling down the highway. I don’t remember who we played or if we won (and you’ll never catch me running around a field in cleats and shin guards again), but this song is the soundtrack to a memorable moment, just like I’m sure it was for many other teens back in 2003—and even today. [RC]

BOYS NIGHT OUT – “The First Time It Shouldn't Taste Like Blood”

One of Canada's finest screamo exports were Boys Night Out, whose debut holds up today just as well as it did on my Christmas list in 2003. Their breakout and subsequent tours with heavy hitters (My Chemical Romance, Fall Out Boy) were purely made possible by pop-punk, but BNO's endearing appeal was their darker Mr. Hyde side: bouts of yelling, screaming, nasty solos and disastrous lyrics. Connor Lovat-Fraser's loud-mouthed musings would become scene commandments. “Even angels end up burned and buried in my backyard/And you, you're just like everyone else.” [BK]

We paid homage to the Postal Service’s first (and only) album Give Up in our Class Of 2003 special. However, that wasn’t the only musical project Ben Gibbard was up to that year. Transatlanticism, Death Cab For Cutie’s fourth album came out eight months after Give Up, and although every music fan and their mother has been talking about the Postal Service and their recent reunion tour, Transatlanticism should not be forgotten. Especially when you look at what came next: 2005’s Plans,which sent Death Cab flying into the mainstream consciousness. Gibbard’s deeply personal songwriting is on full display throughout Transatlanticism, but I chose the soft, acoustic closing track, “Lack Of Color” for purely personal reasons: I named my blog after a line in the song. [BM]

THE DISTILLERS – “Beat Your Heart Out”

When it came to chick punk singers, Brody Dalle of the Distillers was definitely one of the best of the new millennium. “Beat Your Heart Out” was the rough “love” song for all teenage girls lusting over their friend’s brother who looked like he walked out of Sid Vicious’ closet. Her deep, raspy voice, coupled with fun guitar riffs, makes this tune one of the poppiest songs off Coral Fang. With lyrics like “There’s nothing left so take the rest/Yeah, you’re draining me,” the song could be an ode to the rollercoaster that is young love. [BJM]

THE EARLY NOVEMBER – “Something That Produces Results”

Most teens discovered bands in 2003 by word of mouth or Myspace. I discovered them (or at least this one) via Comcast’s OnDemand service. I was perusing Music Choice and Fuse’s music video sections when “Something That Produces Results” caught my attention. Don’t ask me why–I had never really heard of the Early November–but I’m certainly glad I clicked “play.” The band opted to play “Baby Blue” over this track when it came to paying homage to The Room’s Too Cold at this summer’s Warped Tour, and although I was slightly bummed, it was still a nearly perfect nostalgic moment. Just ask their hype woman. [RC]

THE EXPLODING HEARTS – “I’m A Pretender”

Okay, so the chorus of this absolutely flawless retro-pop-punk gem is “I'm a pretender at the game of love/Need somebody help me shatter my heart.” But I will never not hear it as “I'm a pretender at the game of love/Pizza party, come and shatter my heart.” Sorry, punk police! ’Tis better to have loved pizza and lost than to have never loved pizza at all. [SH]

FALL OUT BOY – “Grand Theft Autumn/Where Is Your Boy”

Fall Out Boy’s iconic song “Grand Theft Autumn/Where Is Your Boy,” was the catchiest tune of 2003 as far as I'm concerned. It was the first FOB song I ever listened to, and I think I played it at least 1,000 times before I listened to, anything else off Take This To Your Grave. This was partially due to the fact that I had dial-up internet and it was way easier to just hit replay, but still! I remember blasting it and strumming my air guitar so hard I almost broke a sweat. I have to admit, after seeing the music video, I started wearing studded belts over my skirts, too. Good thing that fashion statement died along with wearing studded belts on the side. (Sorry, Pete) [BJM]

Ribbons And Sugar established Gatsbys American Dream as black sheep—and they embraced it. Freakishly accessible songs with no choruses to be found? Yup. Fearless critique of the music industry they relied on? Check. A frontman that looked like your high school quarterback with a voice in the clouds? Accurate. They were a unique beast—semi-prog, part-emo and all-groove—one that would influence everyone from Squid The Whale to Jonny Craig, who both enlisted singer Nic Newsham for his guest vocals. Their fairly recent reunion attempt was publicly botched between members, but not before a single snuck out in 2011. We're hoping the grown-ass men of GAD can work things out for the betterment of our scene again. [BK]

I was 15 when I picked up a copy of Relient K’s third album, Two Lefts Don’t Make A Right… But Three Do, and I’m pretty sure I kept it on repeat throughout my freshman year of high school. The album balanced slightly goofy pop-punk jams (“Mood Rings,” “College”) alongside surprisingly thoughtful songs (“I Am Understood,” “Getting Into You”) without coming off as forced or trite. The album’s opener, “Chap Stick, Chapped Lips, And Things Like Chemistry,” is three minutes and 11 seconds of light-hearted (and slightly nonsensical) silliness, but 10 years later I still can’t resist singing along whenever it comes on my iPod. [BM]

THE WEAKERTHANS – “The Reasons”

In 2003, I took a vacation with my family to Russia. My brother lives in Moscow, so we visited him for a few days before exploring lots of other towns and cities via a cruise ship that traveled from Moscow to St. Petersburg. At the time, portable CD players were still in fashion (I had only seen an iPod once before that trip), and with me I had brought about a dozen CDs—including an advance copy of the Weakerthans' Reconstruction Site, which hadn't been released yet. That album became practically permanently lodged in my CD player for the entirety of that trip, soundtracking our slow crawl up the Volga river, taking in a culture completely foreign to me in all aspects, from language to cuisine. It was one of the best experiences of my life, and this song is one of my favorite songs of all time. It is the absolute perfect love song, and my wife agrees; it soundtracked our first dance as a married couple. [SH]