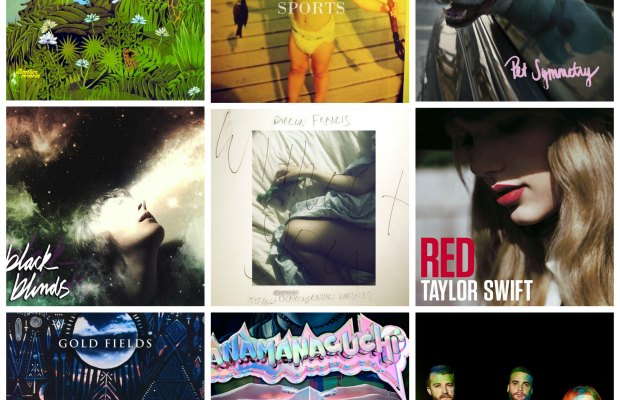 Here at AP, we have thin walls and loud speakers, which, for the most part, is musically enriching for all. We are constantly exposing one another to new tunes. So, for this playlist, we decided to invite the whole office in on the fun to showcase a few of the songs that have gotten us through the dog days of summer 2013.

This song, and the album of the same name, is absolutely insane. Technically (read: according to Wikipedia), Endless Fantasy is the band’s first full-length since 2009. The official video for the title track “Endless Fantasy” tells the story of a girl who, on a typical New York City day, wakes up to the undulating glow of her space-cube alarm clock, rides her bike to pick up some pizza, delivers the pizza to a party, and then the party reaches a fever pitch as the party-goers affix a slice of pizza to a weather balloon which they launch into space. Spaaaaaaace! The band actually did this, by the way. The weather balloon is a real thing—they stuck a GoPro inside some contraption, space-proofed a slice of pizza (how?), and sent it on up into the stratosphere. And that is what summer means to me. That’s the prompt, right? —Shannon Sullivan, Art Associate

Is it even possible to have a summer playlist without including the Beach Boys? (Don't answer that, Jason.) Any of their songs are perfect for summer, but this gem has the uncanny ability to force my windows open, toss my hair in the breeze and plant a massive smile on my face. I also love that Brian Wilson penned this hit after his mom told him dogs bark because they pick up bad vibrations from people. Moms plus dogs equal the best inspiration! –Nichole Fazekas, Marketing Coordinator

Forget fun in the sun—summer is all about late-night adventures for us complexion-challenged types. More than once during the hot months, I have found myself driving back through the city to my apartment, taking the long way with my windows down to float along engulfed in a bit more of my go-to night music, Black Blinds’ new self-titled album. It makes for a dream-like experience when their spooky, atmospheric tunes are the only thing echoing through a sleeping city.—Cassie Whitt, Web Content Manager

At first glance the pairing seems like a farce. Sure, moombahton-maestro Dillon Francis and house-provocateur Totally Enormous Extinct Dinosaurs could have crossed paths during a music festival, but how (and more importantly why) had they found time for a collaboration? After falling into TEED's ethereal vocals and succumbing to the tracks blissful electro waves, the search for answers is consumed by the overwhelming desire to dance across the room like no one is watching—even when the entire staff might be! The track may allude to post-romance sorrow, but in the end, it's all about the power of recovery. –Derek Staples, Advertising Account Executive

GOLD FIELDS – Black Sun
I can't remember the last time I ever recommended an entire album, but Gold Fields Black Sun is a keeper. This album spans the gamut. Moody and ethereal tracks like “Closest I Could Get” that build through “Dark Again” to dancier tracks like “Treehouse.” Whatever mood I'm in, I can put this album on and be a “Happy Boy.” Yeah—that's a good track too.—Rob Ortenzi, Director Of New Media

Every song on this Gold Fields album is so full of energy; it's perfect for the summer. “Moves” is a fast song with a catchy beat that makes it almost impossible to contain your super awesome shoulder-dancing skills.

Toward the end, there is a Darude “Sandstorm”-y build that explodes into Dance Party 2013. Great album, and they put on an amazing live show, with lots of woodblock. Check 'em out.—Deanna Zamudio, Art Associate

THE JOY FORMIDABLE – “A Heavy Abacus”

I fell hard for this nerdy slacker-rock four-piece after their debut album, Sports, came across my desk (not long after we featured them in our 100 Bands issue). They write songs about awkward young love, oversharing on social media and killing time drinking beers with your friends. If it were up to me, my summer playlist would consist of every song from this album, but since I'm forced to pick one, I'm gonna go with “The Weekend,” which is the perfect song for any uncomfortable social situation you find yourself in during theses last few summer weeks (i.e. family reunions, outdoor weddings in 90-degree heat). The Garden State-inspired music video is just an added bonus.—Brittany Moseley, Associate Editor

Look, I will be the first to admit that I was the girl that hated Paramore when they first appeared on the scene. Now I am totally eating my words. This song and record rule. I had a total jaw-dropping “Are you kidding me?” moment when I heard this song. Krysten and I got in the car after lunch to head back to the office, and as we were driving I asked who the band was, and when she said it was Paramore I was shocked. Hayley's voice is golden and the production of this record is great. “Ain't It Fun” is definitely my favorite song off the record and has totally been my summer jam. It's significant to me because this is my second summer post-college graduation and every time Haley sings, “Ain't it fun living in the real world,” I cry a little for all that I've learned this past year. From learning how to use the stove to learning that Paramore don’t suck (despite what my 17-year-old self once said), I will definitely say that it is fun living in the real world. —Samantha Ruff, Advertising Account Executive

Vocalist/bassist Evan Weiss (also of Into It. Over It, Stay Ahead Of The Weather, Their/They're/There and probably 14 other bands we don't even know about yet) delivers a punchy, Piebald-esque jam about wishing violence upon some jabroni who messed up his ride. Sure, the song title's a little bit wordy. But it's not some Fall Out Boy-level in-joke; it actually tells you exactly what the song is about, so extra points for honesty.—Scott Heisel, Managing Editor

THE SUMMER SET – “Lightning In A Bottle”

The Columbus, Ohio, quirk-pop duo of Tyler Joseph and Josh Dun have a knack for making depressing sentiments couched in wondrous pop constructions. Consider “The Run And Go,” a piece of piano-pop that could've had the boys on any number of ’70s TV variety shows back then—if the duo had been born then. The bouncy piano figure undercuts the character's pathological need for some company (significant other, parent, friend, middle-aged rock critic, et al.) after he's killed someone. Dude's a nervous wreck and somebody is coming after him, whether it's the cops or a gang of people avenging the death in question, but he just sounds so damned cheery over the neuroses. The combination of breezy melody and Joseph's mea culpa—punctuated with an added screamo-nod at the end—makes this one perfect to prance around the house to while operating a Bissel Green Machine™ to remove those pesky bloodstains off your carpet.—Jason Pettigrew, Editor In Chief