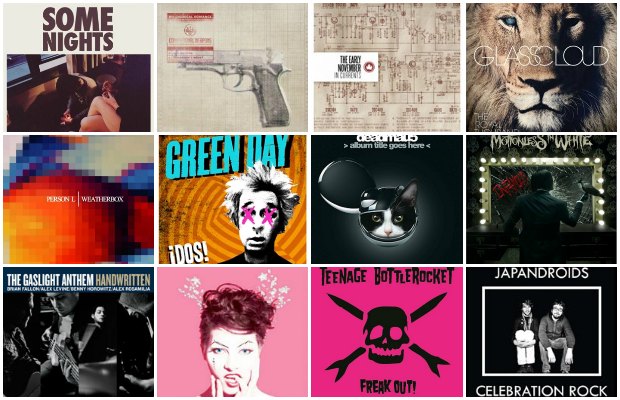 As music years go, 2012 wasn’t shabby, and we have 12 songs to prove it. Our editors sift through copious amounts of music annually (daily, even). So, when they pick something as a favorite, it stands out against an expansive backdrop comprised of everything from dudes who use hacksaws as instruments to Warped Tour staples and Grammy nominees. Then again, it may not be that deep. We just really liked this stuff. Enjoy and subscribe to this playlist and buy the MP3s on Rdio!

When AFP shared that she was funding a new album via Kickstarter, I backed it. I backed it so hard, and regretted nothing when she delivered the result. “The Killing Type,” the album’s second single, emerged with a desperate and bloody music video and I almost defenestrated myself as a result of overwhelming “yes, please!” It’s perfect for all of us verbally violent pacifists with lines like “I couldn’t kill to save a life/I’d rather die a peaceful piece of shit-bait shame-filled coward/Thanks” that escalate to yells of “die! die! die!” by the end. I loved this song so much, I took Palmer’s “Ukulele Anthem” advice to “stop pretending art is hard” and taught it to myself on guitar (all four-ish chords of it.) If your guitar skills are as meager as mine, you know that’s commitment to a song. [CW]

The world should probably take turns punching deadmau5 in the face for giving a leg-up to Skrillex, schtupping half the planet’s share of hot girls and having a jaundiced attitude toward the machinations of the electronic dance music scene. But I’m going to take a pass at my turn, because his collaboration with My Chemical Romance frontman/conceptualist Gerard Way resonates longer and harder than the army of dubstep dipshits encumbered with severe haircuts, dumb stage names and a ton of laptops that fell off a truck. The ‘mau5 lays down a future-world dystopia that’s all martial-law thump and mechanized-death synthesizer figures, while Way’s William Gibson techno-fear lyrics (“Spent shell casings/photographs that I’m erasing”) conclusively prove if he were 10 years older, he would’ve been fronting a badass industrial rock band and completely killing it in ways many of that genre’s founders simply couldn’t. (Hey, Reznor: Holler at your boy. Not like you need to, but people need a reason to use the phrase “next-level shit” in their current vernacular.) [JP]

“Tell Me Why” by The Early November from In Currents

The way the Early November chug their way through the standout track of In Currents is inspiring and moving in a way most music simply wasn't this year. Ace Enders' repeated pleas of “Tell me why” push the song into the clouds, with the verses being just subdued enough to let you catch your breath before another chorus explodes. An absolutely flawless song, and one that is essential listening for this or any other year. [SH]

I first heard “Some Nights” while watching The Colbert Report’s week-long summer music festival, StePhest Colbchella '012. (Oh yes, it’s a thing.) Not long after, I began hearing it on every radio station. Even though the song quickly became overplayed, it remains one of the best tracks from the band’s sophomore album. Unlike fun.’s first single, “We Are Young,” “Some Nights” showcases the band’s unique brand of gospel-choir-meets-Queen operatic piano pop. Whoever said all pop radio music is just fodder for the masses, needs to put down the One Direction CD and start watching more of The Colbert Report. [BM]

“Here Comes My Man” by the Gaslight Anthem, Handwritten

The Gaslight Anthem start their fourth record with the raucous arena rocker, “45,” but it's their second single, “Here Comes My Man,” that I can’t get out of my head. Maybe it’s the simple and insanely catchy chorus with its “Oh sha-la-la’s.” Maybe it’s because the song is another stellar example of the Gaslight Anthem’s ability to meld Springsteen-influenced classic rock with punk. But I’ve got a feeling it’s because Brian Fallon is one man who can get away with writing a song from a woman’s point of view, and make it empowering to female listeners at the same time. Now, if only those pop princesses polluting the radio waves would follow suit. [BM]

“White Flag” by Glass Cloud from The Royal Thousand

The debut album from Glass Cloud is ugly, punishing and exhausting. There’s so much going on in any given track, it feels like four different albums are playing at the same time and the only thing holding each song together is centrifugal force. And that is precisely why the Glass-pack stick out of the morass of metalcore convention like a dollop of drain cleaner fizzing in your iced tea. This track opens the album and pretty much states the band’s intention to overpower you immediately with guitarist Joshua Travis’ relentless eight-stringed malevolence, drummer Chad Hasty’s automatic weapon fire, Travis Sykes’ low-end migraine and Jerry Roush's insistence of calling you collect from Hades. Yeah, the song might be called “White Flag,” but it’s you that’s going to be doing the surrendering. Turn it up or turn around and go home, candyass. [JP]

For my elderly New Wave carcass, the second installment in Green Day’s current trilogy of workaholicism offers more soundtracks for debauchery, vandalism and quickie professions of love than I’m used to hearing in these oh-so-earnest dad-punk times. Billie Joe Armstrong must’ve locked himself in his music room cranking nothing but Motown comps and Elvis Costello’s Get Happy!!! to achieve these four minutes of melodic grace and pogo power. Tré Cool’s swinging drumming, Mike Dirnt’s nimble, caffeinated bass and Armstrong’s strident vocals all come together to remind us how horribly lame Bruno Mars is when it comes to artistic opportunities lost. Note to Armstrong: Get well soon, buddy. Somebody’s gotta school these bitches on how it’s done. [JP]

“Younger Us” by Japandroids, Celebration Rock

Whenever I hear this song, all I want to do is gather my friends and head downtown for a night of drinking. Granted, I feel the same way whenever I hear a Ke$ha song, but “Tik Tok” is nowhere near as memorable as “Younger Us.” Celebration Rock is full of spirited, youthful anthems about life on the edge of adulthood, and none of the songs capture it better than “Younger Us.” Whether you’re 23 or 63, you’ll know exactly what Brian King is talking about when he sings, “Remember that night you were already in bed, said 'fuck it,' got up to drink with me instead.” Youthful abandon has never sounded so good. (Take that Ke$ha.) [BM]

“Devil’s Night” by Motionless In White from Infamous

Before they visited our office last month, I went on a Motionless In White research spree in case I would have to conduct an interview. That lead me to  Infamous and its first single, “Devil’s Night,” which firmly planted itself in my iPod and on repeat. Perhaps I like songs that abuse, because by the time you reach the “I said, ‘Go fuck yourself!’” scream at 3:15, “you” are both a “disgusting piece of shit” and a “fucking fake-ass hypocrite” thinking, “Damn, dude. What the fuck did I ever do to you?” At the same time, you’re empowered by the anthem’s invincibility theme and feel as if you, too, have taken on the mantle of coming “to fucking scare” everyone who ever doubted you “to death.” With this song, MIW prove survival is the best revenge. [CW]

“Boy Division” by My Chemical Romance from Conventional Weapons: Number One

Rumblings of “Boy Division” as a working title in the My Chemical Romance realm can be dated to at least 2006. So, when the band announced that the first installment of their Conventional Weapons release would feature a song that had finally been given the honor of wearing the long-held name, I knew it had to be good. And, man, it is not merely good, but fantastic. Almost uncomfortably honest and abrasive, “Boy Division” features gems of sardonic self-awareness such as “I’m not dead/I only dress that way” and motifs that made it to Danger Days: The True Lives Of The Fabulous Killjoys in a different incarnation. It feels like a snapshot of the start of this album’s scrapping and the birth of Danger Days. It also feels amazing to scream along to as you surpass the speed limit on an empty highway. [CW]

Full disclosure: I released this song on a split 7-inch between Person L and Weatherbox this February. However, that record is long since sold out and I don't get any money for digital sales, so I don't see any significant conflict of interest in telling you to buy this song off your preferred digital retailer immediately. As someone who's celebrated Ken Vasoli's entire catalog, from the Starting Line to Vacationer, I legitimately think “OK” is the greatest song he has ever written. If the repeated, single-word chorus doesn't give you shivers, you're not alive. [SH]

“Maverick” by Teenage Bottlerocket from Freak Out!

There are so many killer tracks on TBR's new LP, Freak Out!, that it was tough to single out just one worth spinning endlessly. (Props to “Headbanger,” “Mutilate Me” and “Radical” for being boss tuneage, too.) But “Maverick” is the kind of song that would be in my head as soon as I woke up and wouldn't leave until I went to sleep. The act of turning the love story from Top Gun into a two-minute pop-punk song is brilliant, and I can't stop myself from singing the harmonies randomly whenever it pops in my brain. [SH]