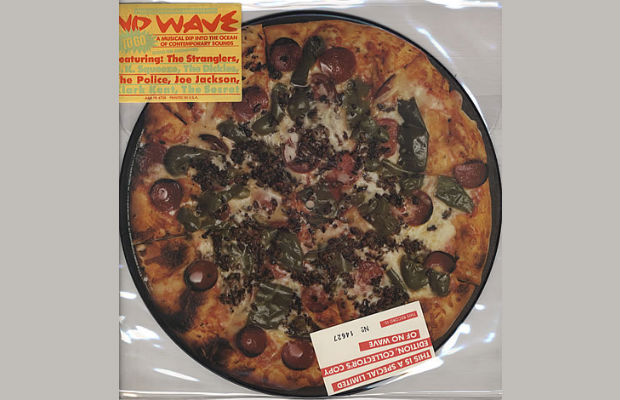 Oh, circular temptress. One slice of you can take up a third of our caloric intake for a day, but we keep coming back for the punishment and gut protrusion. Always. Why aren’t there more musical odes to pizza Love songs, in fact. Where are all the pizza love songs? Are all love songs secretly about pizza? “Whenever I’m alone/With you [Pizza]/You make me feel like I am whole again.”

The Bouncing Souls take the old adage “if these walls could talk” and personify a cozy gathering place that is “so Jersey”—a pizza placethat has seen a thing or two in its time. Most of those things appear to be the lives that have been lived surrounding it in an old, boring town. The Souls paint a picture implying that if its walls could talk, this pizza place may advise, in a melancholic tone, that it’s okay to dream bigger and to get out of town. [CW]

My pick for this playlist was up in the air for a bit. I was stuck between System Of A Down's “Chic ‘N' Stu” and Herman Cain's “Imagine There's No Pizza.” I decided to do what the rest of America didn't do in 2012 and pick Cain. The former GOP presidential candidate/Godfather's Pizza CEO put his own spin on John Lennon's “Imagine” way back in 1991 at the Omaha Press Club meeting. Although Cain's version isn't as famous, how can you resist his deep bass voice—plus the backing of a gospel choir—as he sings, “Imagine there's no pizza/I couldn't if I tried/Eating only tacos/Or Kentucky Fried/Imagine only burgers/It's frightening and sad.” Say what you will about his infamous 999 plan, but when it comes to Americans love of pizza, Cain knows just where to hit us. “All I am saying/Is give pizza a chance.” Oh Herman, you had me at mozzarella, anchovies on the side and maybe pepperoni. [BM]

Featured in our 10 Essential third-wave ska songs about food

This song is a repetitive conversation between two rapping hipsters (ripsters?) who are high out of their numb skulls and can’t seem to find each other at a beloved conjoined dining establishment. That’s it. Despite its weird cult praise, I wasn’t even aware this song existed until I found myself in the middle of high-waisted-pants-wearing people swaying and singing along as it played between bands at a show. I learned the lyrics within roughly two lines and mouthed them at a bearded man who gave me a “we accept you as one of us” nod. I promptly found a deserted corner where I could hide. Because of that, this song actually just scares me. And nothing about pizza or Taco Bell ever scares me. Embedded for your enjoyment is the remix by Warped Tour 2013 standouts Wallpaper.. [CW]

Most hardcore bands suck—but Hank Jones aren't most hardcore bands. The final track on their one and only full-length, 2005's Saturdays Of Thunder, “Pizza Party” is one of the most positive hardcore songs we've ever heard, mainly because it's about the greatest food on Earth. (Sample lyric:”We're gonna order a lot of pizza and invite all of our friends/We'll have such good times, I hope the fun will never end!”) The chorus of the minute-long rager is simply, “Pizza! Pizza! Pizza! Pizza! Pizza party!” ensuring for maximum singalongability. [SH]

Just before throwing in the towel on this pizza playlist, I recalled Dean Martin's signature rendition of “That's Amore,” maybe the most endearing pizza shout out in American pop culture history. You've subconsciously learned it through countless movies and Saturday morning cartoons, and most likely, playing in the belly of an actual pizzeria at least once. “When the moon hits your eye/Like a big pizza pie/That's amore.” This solid gold oldie was clearly the inspiration for screamo sweethearts Touché Amoré. [BK]

NO WAVE TO GO
This 1978 compilation album issued by A&M Records doesn't have a single song about pizza on it. There are classic new wave/punk tracks though, including two shockingly furious live tracks by the Police (“Landlord” and “Next To You”), the Stranglers' patently evil “Bring On The Nubiles,” as well as other contributions by Daryl Palumbo's favorite band (Squeeze) and some songs from one of Scott Heisel's favorite records in life (Look Sharp, the debut album from Joe Jackson). I mention it here because it's one of the tastiest picture discs ever issued. [JP]

System Of A Down are equal parts furious and freaky, mixing high-powered metal with a degree of insanity. The lyrics to this track somehow exalt the magical properties of the greatest foodstuff (“Pepperoni and green peppers/Mushrooms, olives, chives”) while addressing the typical marketing onslaught we Americans have grown up with (“Advertising's got you on the run”). And when singer Serj Tankian and guitarist Daron Malakian break into piston-engine operatics at the end, it's as American as white pizza with anchovies, sliced tomatoes and fresh mushrooms. Don't even judge my toppings, man… [JP]

TURBONEGRO – “Age Of Pamparious”
(via Sebastian Larsson on Facebook)