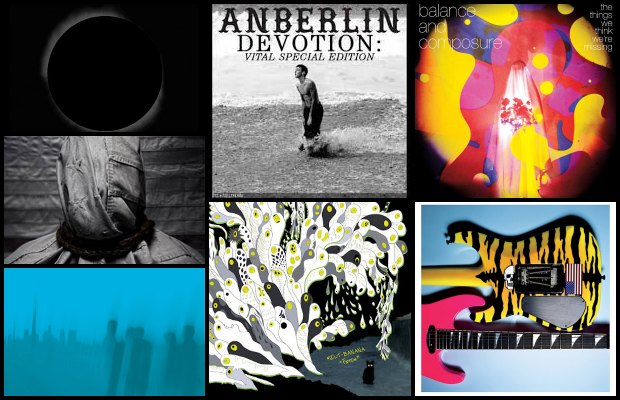 Here at AP, we have thin walls and loud speakers, which, for the most part, is musically enriching for all. We are constantly exposing one another to new tunes. If you were to stumble into our office and wander our halls this month, you might have heard some of the following new music.

AFI – “The Conductor”
As a longtime AFI fan, it is difficult to go into albums like Decemberunderground and Crash Love without wishing they would have maintained their sound from Black Sails. The catchy riffs in “The Conductor” take their genre one step forward, and two steps back. It feels like the band are reimagining their dark roots, accompanied by Havoc’s soul-crushing lyrics. The thumping bass line drive AFI’s train railing straight into listeners’ ears. This song can turn an old fan and into a “new-born believer.” [AS]

For anyone who felt 2012's Vital was too new-wave leaning, Anberlin's new single should be just right. They rekindle the sparky pop-rock anthems from Dark Is The Way, Light Is A Place and New Surrender on “City Electric,” where vocalist Stephen Christian reminds us he's one of the most talented vocalists to rise from our scene, channeling vintage Bono in his peaks as his bandmates maintain an upbeat atmosphere, Killers-esque drum beats and all. This is a band who've been consistent for more than a decade. It's easy to stop keeping tabs on them, but not recommended. [BK]

BALANCE AND COMPOSURE – “Notice Me”

In “Notice Me,” Balance & Composure play gritty alt-rock with the tranquility of a Koi fish pond. But the vibe hits like a wave of mental acetone, and vocalist Jon Simmons steps completely outside of his comfort zone—trading melancholy for masochistic hulkamaniac. Simmons screams, “We both know what I came back for/Won't you let me in? Won't you let me in? Oh God let me in.” She probably shouldn’t let him in. [MC]

KI:THEORY, “Needles”
I get roughly a billion CDs in the mail each week, and while I try to get to all of them eventually, those creatively packaged seem to make their way to the top first. Ki:Theory's Kitty Hawk came to me as a spraypainted CD-R inside of a hollowed-out 5.25-inch floppy disk, with no bio, onesheet or promotional materials of any kind. Intruiged, I put it in to discover a pretty cool mixture of the Album Leaf-esque electro-indie soundscapes with a couple punky outbursts worthy of the first Sleigh Bells record. But then my heart skipped a beat when my iTunes told me two tracks featured Maura Davis, formerly of Denali and Ambulette—”Needles” being one of them. It's a great chillwave track with a slightly off-kilter electro beat, and I never would've even known it was there had my nerd switch not been flicked. Bands, let this be a lesson to you: CD packaging totally matters. [SH]

“With government sucking the dicks of corporations/It looks like Uncle Sam finally put his money where his mouth is,” Jason Butler shrieks. You could try to be more punk than that, but you would not be successful. In this exotic piece of hardcore, letlive. rock against corporate fascism of the vilest nature. But the somber overtone has a sentiment that is less viva-la-rebellion and more an alert that we’ve already lost. [MC]

MELT-BANANA – “The Hive”
Now reduced to a duo of vocalist Yasuko O. and guitarist/gadget inspector Agata, Japan's Melt-Banana have delivered Fetch, their 10th album of glorious grind/thrash/electro polemics laced with oh-so-chipper vocals. The whole disc sounds like you and your friends having a relentless pillow fight while dodging high-arcing sparks from faulty wiring room lighting. But the track that does it for me is  “The Hive,” where Agata clog-dances all over his cockpit-sized pedal board at breakneck speed, only to end up in a weird time-stretched tremolo vortex that sounds like gunfire from an Uzi—only more melodic. Why Melt-Banana haven't appeared on Yo Gabba Gabba! yet is completely beyond my comprehension. [JP]

PANIC! AT THE DISCO – “This Is Gospel”

Upon first listen, I regarded “This Is Gospel” as a mere semi-quiet opener to AP 304 cover artists Panic! At The Disco’s new album, Too Weird To Live, Too Rare To Die! However, it grew on me so much that I’ve listened on an almost daily basis since its release as a single in late August and may or may not have shed a tear when I saw them play it live on the Save Rock And Roll tour. It takes the classic “anthem” to a whole new level, turning it into a sacred plea. Head to APTV to check out the making of the “This Is Gospel” music video today. [CW]

When I interviewed Max Bemis and Sherri Dupree-Bemis for our “Noise On The Side” special in AP 291, the couple’s new band, Perma, was still in the early stages. Now, almost a year later, Perma have a new album on the way and an upcoming tour with Matt Pryor. Dupree-Bemis told me the goal of Perma is “to celebrate love and relationships and marriages,” and judging from their first single (and the album’s title track) they’ve succeeded. “Two Of A Crime” is the sweetest thing you’ll hear all year. And really, couldn’t all of us use a little more sweetness in our lives? [BM]

THE PRETTY RECKLESS – “Going To Hell”

Taylor Momsen attacks her second album with more confidence than her debut, Light Me Up. Her edgy and rough sound contradicts her blonde exterior in the best possible way. It is the kind of contradiction that one longs for in the rock scene. Dropping confessions and rebutting them with “I’m going to hell,” I feel like I’ve sinned and I want to scream it to the world. I wish more women would escape the female pop stereotype and create more head-banging heavy rock albums like this one. [AS]

If you’re one of those Saves The Day fans still longing for the band’s early days, you should give their new self-titled album a listen, because it’s the closest you’ll ever get to Stay What You Are part deux. Chris Conley is a lot more positive and Zen-like these days, and his upbeat attitude is on full display on “Ring Pop,” a two-and-a-half minute upbeat sugar rush. We know nothing will come close to classics like “Rocks Tonic Juice Magic” and “Shoulder To The Wheel,” but “Ring Pop”—and the rest of the songs on Saves The Day—are pretty damn good. [BM]

The title track of Sleigh Bells’ upcoming album has everything I crave in my SB songs: noise-laden verses that are both catchy and grating enough to make it sound like your speakers are blown when you blast it with a chorus you can memorize within one listen. I like to know that the music I dance to and play at top volume might sound like a melodic buzzsaw to someone else’s ear. Thank you Sleigh Bells, for constantly bringing that. [CW]

The second single to State Champs' debut album warns of their impending pop-punk takeover on Oct. 8. Why wait for the chorus to hit 'em with a hook? That seems to be their train of thought, as singer Derek Discanio surfs the choppy rhythms like a pro. These capital region New Yorkers set out west to record with Sam Pura (the Story So Far, Man Overboard) and heed production advice from New Found Glory guitarist Steve Klein in sunny California, so just imagine what that dream team helped the band achieve. [BK]

The best song off the best album of the year. (Please don't tell Hayley Williams I said that.) What's not to like? [SH]