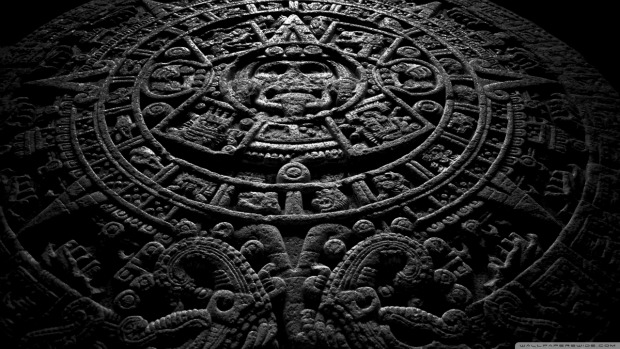 Our demise fast approaches, fellow Earthlings. Come Friday, according to those kooky Mayans (or to people who think they can comprehend the work someone did thousands of years ago better than scholars), this place we call Earth is going up in flames. Or something. Does anyone even know for sure how we’re going to die? Anyway, this is our soundtrack to the apocalypse. Put it on as you’re burning, drowning, bemoaning the loss of your iPhone in a global grid blackout or getting eaten by a zombie.
[Subscribe to this playlist]

“Armageddon” by ALKALINE TRIO from From Here To Infirmary

The only thing Alkaline Trio do better than a mushy punk-rock mixtape track is nihilism, death and destruction, so they were an obvious choice for the end of the world. “Armageddon,” off 2001’s From Here To Infirmary, captures both the gloom and romance of the end of life as we know it, whether it just feels like the end of the world after a rough breakup or whether the sky is actually falling during a Mayan-predicted apocalypse. Either way, a goodbye kiss never hurts. [BH]

“Mona Lisa (When The World Comes Down)” by THE ALL-AMERICAN REJECTS from When The World Comes Down
I’m all for partying while the world is falling apart around me (see my second Apocalypse song choice), but after the end-of-the-world rager is finished, I want to hear this song as I contemplate my next move. “Mona Lisa (When The World Comes Down)” is a slightly melancholy, yet surprisingly uplifting acoustic song that will quickly help you put this Brave New World into perspective. At the end of the day (or the end of the world), when all your material possessions have literally disappeared, all that matters is who is sitting next to you. [BM]

When the world starts to burn, I'll be on the roof of my house holding a boombox over my head Lloyd Dobler-style, blasting the opening track from the Seattle post-everything maniacs' last album. Johnny Whitney wails like he's twisting on the devil's trident while drummer Mark Gajadhar revs the engine at top speed and drives the whole enterprise off a cliff. You can keep your black-metal posturing: This is the soundtrack for witnessing four-city-block fires, the crumbling of skyscrapers and suicidal hedge-fund operators blowing their brains all over the back wall of Hell, knowing all their cash couldn't stop it from happening. My apocalypse burns brighter and longer than yours, bitch. [JP]

Maybe this is just the 21-year-old asshole in me talking, but I plan to be thoroughly inebriated as the clock strikes midnight on Friday. Cheers to disaster! Cheers to ruin! Live Fast, Die Young was originally a 1958 film about two teenage girls who run away from home and become jewelry thieves, but the phrase later became an iconic punk mantra about not giving a fuck and just getting drunk, courtesy of the Circle Jerks. “Don't worry about it anymore/Go on out/ Get fucked up/I don't know what for.” So don’t be bummed about the world ending; just get drunk! And if the world doesn’t end, a hangover at work Friday will seem like small potatoes. [BH]

Because, let’s face it: The sun will come out on Saturday. The world’s not going to end, you crazy kids. [CW]

If the world does end, I have a hunch that it’s actually going to be at the hands of some stupid human. “Eyes Wide Open” describes “the end of the story,” the awareness of our harmful behaviors and ultimately, the complacency of man, a creature unwilling to sacrifice its comfort—not even to save the world. [CW]

“Apocalypse Please” by MUSE from Absolution

The first words you hear out of Matt Bellamy's mouth on 2004's brilliant Absolution is, “Declare this an emergency,” overtop pummeling piano and a beautifully chaotic rhythm section. But if you're a little thick-headed, Bellamy practically spells it out for you: “This is the end/This is the end of the world.” Honestly, if this song was playing while aliens came down from space and vaporized us on December 21 or something, I'd be okay with it. I'd also probably just figure I was in a Michael Bay movie, due to the pomposity of it all. [SH]

This song may not be particularly apocalyptic, but it is one of my favorite songs in this doomed world. It has been a source of comfort many times when I desperately needed it. At the world’s end, I would venture to guess that I’m going to be fairly terrified and uncomfortable. If I must die in some horrific Earth-disintegrating disaster, I’d like listen to this as it all fades in slow motion, from the earth to the morgue… [CW]

“Apocalypse WOW!” by REGGIE AND THE FULL EFFECT from Under The Tray

If the world really is coming to an end, having Coalesce bellower Sean Ingram howl, “LET'S GET IT OOOOOOOOOON!” is a pretty solid way to get motivated to fight back against the forces of evil. When Reggie frontman James Dewees sings, “So this is how it ends?” we're pretty sure he's not referring to humanity ending (the rest of the song seems to be about maybe wishing death on an ex-friend), but then again, dude could be psychic. I mean, he did predict the massive wave of vapid dance-pop with his Fluxuation alter ego… [SH]

“Merry Christmas Mr. Lawrence” by RYUICHI SAKAMOTO from Piano One

I like to think there will be some big apocalypse afterparty where all my friends, pets and immediate family members can watch an instant replay DVD of the event on some Gigantitron screen. But I'm not sure that's going to happen. What I am positively certain of is that despite all my curmudgeonly nihilism, if everything disintegrates this Friday, I'm going to be torn by both great melancholy and peaceful resignation. Ryuichi Sakamoto's solo piano version of the theme from the 1983 movie captures those emotions succinctly—which is why it is my favorite song in life. [JP]

“Let’s Dance To Joy Division” by THE WOMBATS from A Guide To Love, Loss & Desperation

If you start to really think about the end of the world, you can get seriously bummed out. Thank God the Wombats are around to pull us out of our Doomsday funk. These Liverpool lads know how to write a song to dance to. The lyrics have always been stellar, but they’re even more perfect when the world’s about to implode: “Let's dance to Joy Division/We raise our glass to the ceiling/’Cause this could all go so wrong/But we're so happy, yeah, we're so happy.” Take a cue from the Wombats: More dancing, less panicking. [BM]